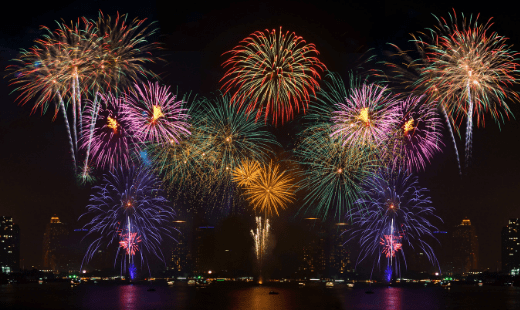 Naperville, Ill. (July 3, 2017)—Fireworks emblazoned the night sky, their explosions choreographed to a patriotic simulcast from 95.9 The River, the FM station of rock ‘n roll favorites. My daughter, on the eve of her third birthday, darted across the openness of Knoch Park like the Road Runner from Looney Tunes, zigging and zagging this way and that, hopping on and off hay stacks, as I chased her playfully with abandon. My wife stood nearby, neck craned upward, watching the crackle and sparkle of the Fourth of July display and singing along to Don McLean’s “American Pie” as it blared over the PA system:

This was the culmination of the 30th annual Naperville Ribfest. It was the perfect summer evening.

We stepped onto the park grounds three hours prior, not sure what to expect of our first Ribfest outing. The only thing we’d heard from friends and neighbors was: 1) be prepared for a massive crowd and, 2) make a beeline to “Ribber Row” if you want to enjoy the festivus of meat.The crowd, as it turned out, was perfectly navigable, even with the added resistance of pushing a toddler stroller. And “Ribber Row” had enough smoky eats to satisfy any carnivore’s cravings. (Our favorite was Desperado’s BBQ & Rib Co. — known by their slogan, “Lick My Ribs”— where we got our hands sticky tasting a sampler of their fall-off-the-bone pork ribs. Yes, we needed a towelette.)

What I didn’t expect was the childhood feeling of nostalgia that permeated the air. From the old school root beer float vendor and carnival rides to the petting zoo and apple cider stand sporting an inflatible donut roof, the carefree side of life that is often fleeting in our world was on full display.

This made sense considering Ribfest is a fundraiser put on by the Exchange Club of Naperville to raise money to help fight child abuse, prevent domestic violence and strengthen families in local communities. The event’s tagline is “It’s about the kids!” Literally, yes; but figuratively, it’s about the child within all of us.

As the Ribfest finale drew to a close, I looked up at the sky and felt as alive as the fireworks bursting in air. This was a Ribfest to remember.

Originally appeared on Fatherhood at Forty.