Get Daily Email
Join/Login CLOSE
Home / Featured Content / Am I a Man?

Hi, I’m Andy and I’m a human male. That may be quite obvious when you see or hear me, but for a long time, I didn’t feel like a man. I questioned my manliness, my masculinity, and wondered why I never felt like a “real” man. I was sure if the true me was known that my mythical man card would be taken away.

I was an emotional child, a scared child who lived in dread of being picked on, pointed out, or even noticed. A hard look in my direction was often enough to bring on tears. I was anxious and on edge, which would eventually exhaust me into deep sadness and depression.

I was raised by a single mom, which made me feel like less of a man from the start. My mother always said I was such a good boy and somehow just knew what she wanted. I didn’t act out or get in trouble. This was in nursery and elementary school, my acting out came later.

At the age of 20, while in a mental hospital, I remembered being molested by a neighbor when I was five years old. It was a bit of a relief to discover there was a reason for those years of not feeling safe. But it brought new worries and concerns: Since I was sexually abused by a man, was I gay? Since I was molested will I become a molester? Those fears and more played over and over in my head, but I never dared speak of them.

I thought real men were tough and stoic. So I pretended by being quiet, keeping to myself, and having few friends. I drank my way through high school and college—which seemed a very manly and accepted thing to do—but most nights, I ended up thinking my friends were just using me. I isolated myself in my room, under a bed, or literally in a closet on multiple occasions, crying.

This was no way to live, let alone being a man, so I tried to stop. I tried to stop living and attempted suicide multiple times in my teens and early 20s.

It was only years later that I began to see and respect my strengths: My resilience, my true toughness, my bravery and courage, my willingness and authenticity in feeling. I saw that the more I opened up and shared, the more others did too. My vulnerable risks were always rewarded. I began to think, maybe my willingness to feel is what really makes me a man? Hiding, resisting, and denying may appear to be traditional manliness but it is another aspect of fear.

What if the bravest thing you could do was cry? What if you felt strong enough to admit that you don’t have it all figured out? What if real men feel? 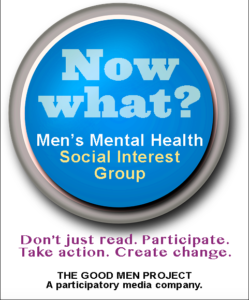