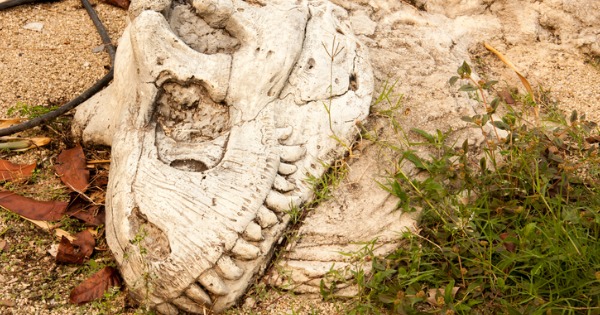 —
When the Good Men Project published my article, “Me And A 900 Mile Long Dragon,” on November 11, 2018, I was pleased to have the opportunity to share my excitement over finding a mud fossil heart and the adventure that lead up to it’s discovery.

If you just clicked on this article and want to read more, may I suggest you go back and read the other article first. It covers my boyhood fascination with dinosaurs and fossils. A very common fascination amongst boys. Be forewarned, it also covers my total agreement with Roger Spurr of “Mudfossil University” that there is clear evidence of a 900 mile long creature, lying dead across the Sahara dessert. A finding that is bizarrely far from common knowledge, as of this date. If you can get through that article then you may want to come back and finish reading this one.

Since I wrote the first article, Mr. Spurr has found evidence for more dragons. Visit him at Mudfossil University – You Tube to learn more about this and the numerous astonishing other things, this humble genius has to share, in the manner of true scientific inquiry.

Who am I to declare Roger Spurr to be a genius? If you read my first article you found out that I am no authority on anything fossilized. My adventure leading up to my discovery of a nine inch long fossilized heart involved getting up from where I was sitting looking at my computer monitor and walking into my backyard.

Discovery required my bending at the waist, picking up the funny shaped rock and looking at it with an open, yet somewhat skeptical mind. At the time I wanted to rule out any excitement over this find, as being just another example of apophenia. Apophenia being the continued belief that some ambiguous, random set of data points aren’t random when powerful others say that they are.

I remember as a child seeing shapes of animals in the clouds while laying on my back in the grass. I knew that they were just clouds that looked like animals birthed by my imagination. This is an example of aprophenia. I would sometimes see faces in the wood grain of the closet doors in my bedroom. I believe most children have such experiences. Seeing faces in random patterns is a subset of apophenia called pareidolia.

When I got into looking for fossils I was often disappointed to find, what I initially thought, was the biggest one I ever collected, was but an apophenia known as a pseudofossil or at least that’s what the fossil books told me. Now, I am not so sure.

Roger Spurr challenges those, who visit his web page, to see if they could find a real mud fossil in their backyard, once given a little coaching on what to look for. That is what got me looking. It took me about ten minutes.

The mud fossil heart that I found, was one of about ten rocks in my backyard that looked like harden organs and connective tissue of some kind. I’m pretty sure that I found a lung. I was more sure of the heart. It looked like a full-grown human heart, just about double in size.

The heart is still tiny in scope compared to the over nine hundred miles long dragon carcus Roger Spurr has seen on Google Maps, stretching across North Africa. You can go to Google Maps and easily find it yourself. Since I found my heart. Spurr has found more dragons, also on Google Maps.

Spurr has found evidence for so many unbelievable things, that it is easy to not believe anything he has to say.

His giant dragons can be chalked up as an overactive case of apophenia. So too, all of his mud fossils and mine. However, if you use your own eyes, with an open mind and critical thinking, you will not only come into believing in dragons, but a giant embryo moving towards a placenta, past giant deceased sperm. Say what?! Learn about it at Mud Fossil University, then go looking for it yourself on Google Maps.

You may want to revisit tales recorded in Sumerian clay tablets of a world built on a slain, split dragon body and wonder.

One of Roger Spurrs harshest complaints is directed at how universities teach geology, physics, biology/medicine, and history to name a few areas of inquiry. Spurr repeatedly reports extending invitations to any learned professor to present and be prepared to debate, more traditional explanations for what Spurr has found and is continuing to find. Such debate is known as being key to scientific inquiry. It is known as “peer review,” which includes those who may disagree with the Ivy League and West coast intelligentsia. So far, Spurr reports no such personage taking up his challenge.

I am not putting myself anywhere near anybody’s peer list on fossil finding or giant creature identification. In the past, I have considered myself capable of wasting time critiquing political parties, sports teams and movie stars, while holding no membership to any list of insiders. Why not share my support for the ideas of Roger Spurr and his many colleagues, that are not necessarily graduates of some esteemed university.

If I could go back in time, about three years and be exposed to nearly all of the ideas presented by Roger Spurr for the first time, I would only be able to laugh.

Retirement from employment has given me time to contemplate many things, that I otherwise didn’t have time for. Such as why I ever spent time caring about politics, spectator sports or movie stars. I am grateful to Roger Spurr for giving me grander things to contemplate.

As I write this today, I am shaking a little in astonishment and wonder. Given the evidence I have seen for myself and held in my hand, it is difficult for me to believe that Roger Spurr doesn’t have it right about a number of things. Search for Mudfossil University and be prepared to be blown away. Then you might try looking around your backyard.

David S. Shaw is a clinical social worker who has specialized in the treatment of men with substance abuse disorders and maintains an interest in Men’s issues in general. He has particular interest in issues related to male sexuality, Pro-feminism, countering rape culture and the socialization of boys. He lives in the Catskill Mountain region of New York State.