Get Daily Email
Join/Login CLOSE
Home / Featured Content / Are We All in This Together? 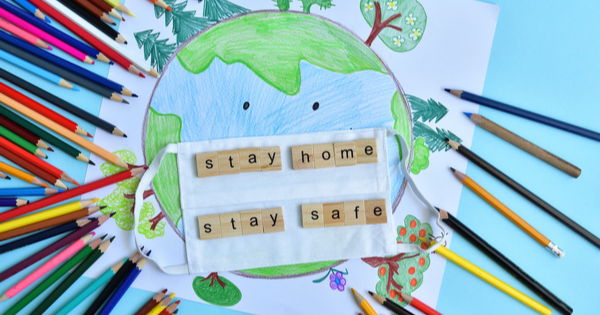 I wish I had at least a vague idea of what the future could look like in a year, or even a month, but I don’t. When the world is threatened, the urge to know can become overwhelming. Usually, we at least know what the usual is. But now, for many of us, aside from what the inside of our homes looks like, we don’t even know that. Too many changes.

Every 10 days or so I drive into town. The roads and buildings are the same as before the pandemic, and I imagine once this crisis is over we can simply return to our “normal” lives.

But then I notice all the restaurants and stores with closed signs. I hear on the radio that news outlets have been losing so many workers (except Fox) they can barely function. Accurate news reporting could be threatened. Or, on the positive side, NPR reported that pharmacy companies, previously known for putting CEO and shareholder profits above everything else, are joining together to find vaccines and treatments for the virus.

One prediction I can make is that more people in the future will want to become doctors, nurses and other first responders, the heroes of this time.

What I mainly have are questions. On the tv and radio, in advertisements and public service announcements, the meme “we are all in this together” keeps getting repeated. It is a sentiment I agree with and one that has become a powerful force for creating pressure to improve our overall health care system and for legislation to protect most Americans, not just the rich and corporations, from the harmful consequences of the pandemic.

It expresses a dynamic truth. With an illness that is so destructive, that can be deadly and spread so easily, with many people infected but showing no symptoms ⎼ anyone can get it, even the powerful, rich, and famous. Boris Johnson, the Prime Minister of Britain, got the illness and wound up in the ICU. Many celebrities, athletes, politicians have been infected. Too many have died. Over 187,000 people worldwide have died so far from it.

So if anyone can get it, we are all in this together.

But some are more likely than others. The poor more than the rich. The people who work in the fields or production plants and can’t stop working, either because their job is too essential or they can’t afford to stop. For example, one of the Smithfield food processing plants was closed only after the mayor of Sioux Falls forced them to. 350 of its workers had tested positive for the virus. The pandemic is exposing social inequities that have existed for years and have been getting worse. The racism. The poverty. These have always threatened people’s lives and they are doing so now.

Over 22 million people have filed for unemployment insurance over the last month. The government can’t handle the situation, especially since the DT administration has never filled many government positions and has consistently undermined the work of government bureaucracies. And that number doesn’t include people who haven’t been able to file their claims due to problems with outdated government websites or whole categories of workers not originally covered by unemployment insurance.

Many small businesses have closed and haven’t seen the same government support large corporations and banks have been given by relief legislation. Meanwhile, the CARES Act provides, according to a Congressional investigation, a windfall of $1.6 million in tax relief to each eligible million and billionaire tax filer per year. This is unconscionable if not insane. We don’t have enough money to give to hospitals, which are starving for income and furloughing doctors in the midst of a medical crisis, yet we are giving money to the rich.

The New York Times had an article about why the future must include an economic realignment. Since 1980, the after-tax incomes of the very wealthy have risen 420% faster than the Gross Domestic Product. For the bottom half of the population, that rise is only 20%. In other words, if we returned to the level of income inequality of 1980, each household in the lower 90% of income would get a raise of $12,000 a year. This is a tremendous shift in resources. Since 2011, a family in the bottom 90% of income “has effectively given the rich $110,597.32” (and growing). Are we creating an aristocracy?

The national debt has been growing at an alarming rate since DT took office, especially since his tax bill took effect in 2018. According to The Balance, a reputable financial news website, even after adjusting for inflation, DT has overseen the largest increase in the debt of any president. This, combined with the continuing shift of money from the middle and lower classes to the wealthy, is making it less likely we will have the resources to fight the disease, improve the infrastructure, protect our elections, and safely and equitably re-start the economy.

To protect all of us, all of us must be protected.

In the late 1960s, as part of the counter-culture movement, there was a call for a revolution in the economy and the social structure of the nation and for a “revolution of [the] values” we live by. But as the outcry for this revolution gained power and seemed to be having an effect on the nation’s conscience, the word ‘revolution’ was appropriated by big business. Suddenly, buying a car, a brand of shoes or kitchen appliance became revolutionary. The word was used so pervasively and in such a commercial fashion, it lost all meaning.

Will the nation’s increasing understanding that we are all in this together be likewise sabotaged? Or will this understanding persist and lead to needed changes in our society?

Due to the pandemic, schools, businesses, doctor appointments, family events all happen on the internet instead of in person. Zoom and social media have been a godsend to those isolated in their homes. What will the result of this be? Will everyone be supplied with a high-speed internet connection? Will a compassionate concern for others replace the previously increasing narcissism?  Or will alienation increase? Even before the pandemic began, social media contributed to increasing anxiety levels, especially with teens.

Since the Fairness Doctrine was ended by Reagan in the 1980s, there are no longer standards obliging journalists to give equal and factual coverage to all sides of an issue and no rules to force outlets to verify information. Will propaganda increasingly replace reliable news, and lies increasingly replace facts?

In the middle of March, according to VOX, Survey 1690 and Gradient Metrics found that about 64% of interviewed Fox viewers thought news of the virus was greatly exaggerated and 86% were not staying at home. On 4/17, DT encouraged protests against Democratic Governor’s stay at home orders and called for a ”Liberation” from social isolation. This led to several demonstrations, including one in the Michigan state capitol, where the protestors called for the Governor to be “locked up” (for trying to protect people).

In education, what will the consequences be of the pervasive use of internet classrooms? Will the efforts of educational corporations, hedge-fund investors and far-right activists be realized, and public schools privatized, classrooms “modernized” into digitized enclosures where mass-produced courses are taught by low-paid teaching assistants? Or will the isolation from teachers highlight to students and parents the importance of face-to-face teacher-student relationships and they unite to save public education? Will the need for a critical understanding of medical information and discerning fact from fiction lead to courses in media literacy, mindful media use and critical thinking, and we develop a more sophisticated, informed, and compassionate citizenry?

DT has been acting like a Dictator. Aside from the virus, what happens in the next election might be the biggest determinant of our future. Will we help him or stop him from creating a dictatorship? Will we allow our fear that he has already won, or anger that the only candidate on the ballot who could defeat him is so imperfect, stop us from voting?  Or will the sheer corruption, incompetency, concern for himself, racism, misogyny, voter suppression, etc. convince more people than ever to vote against him, by mail or otherwise?

Each day, we are presented with dueling visions of our future, represented by two political figures. We have a President who lies and whose focus is always on himself. And we have Governors like Andrew Cuomo, who in his daily news conference starts with the facts and then proceeds to empathy for others. One treats us as dumb, incites our basest qualities, and calls for a “liberation” that will imprison us with bars of lies and threaten our very lives. Another speaks to the best in us and gives us tools to keep ourselves and others safe.

We never know what will happen tomorrow. But since the attitudes, understandings and abilities that will be present in us in the future are growing in us now, the best way to prepare for the next moment is to be informed and mindful in this one. So, what actions can we take now to create a future where “we are all in this together” is the guiding principle of our culture?

Facebook41Tweet5PinEmailShares46
wpDiscuz
0
0
Would love your thoughts, please comment.x
()
x
| Reply
Share this ArticleLike this article? Email it to a friend!
Email sent!