Get Daily Email
Join/Login CLOSE
Home / Featured Content / Are We Men, Or Are We People? 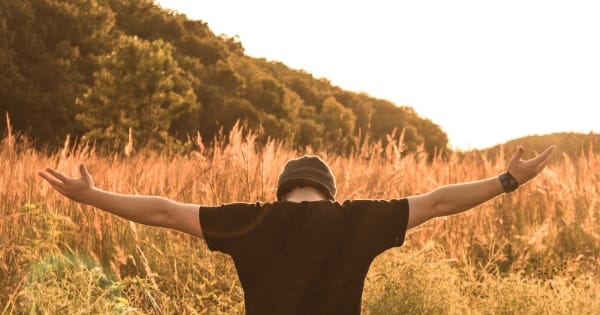 I used to think the solution to toxic masculinity was to rebuild the traditional gender binary in a healthy way. Now I’m not so sure.

On the one hand, I don’t know that there’s anything intrinsically wrong with archetypes of “protector” and “nurturer,” with whatever characteristics we wish to assign to those categories. And I can acknowledge that calling the first one “masculine” and the second one “feminine” isn’t inherently problematic… if we allow both men and women to express whatever mix of masculine and feminine they think is right for them.

But at some point, when have we watered down the connection between physical gender and identification with those archetypes that it’s irrelevant? Are we just clinging to those associations out of habit?

Here’s something I hope we can all agree on: There’s something wrong with the way we’re raising our boys. Nearly all mass murderers are men. Men are deeply and increasingly lonely. We are a gender that is emotionally adrift, and it’s destroying us.

What we can’t seem to agree on is the best approach to overcoming this.

One position, the one I disagree with the most, is that the liberal shaming of men and manhood as “toxic” is driving men to deny what traditionally has made them relevant. The extreme violence, someone holding this position might argue, comes from an attempt to re-establish that traditional place of dominance.

Another position, one that I’ve held up until recently, is that whatever good there was in traditional masculinity has metastasized in a culture which replaced it with an unattainable hypermasculinity, and then shamed men for not being able to attain it.

For this contrast, compare John Wayne movies like “Big Jake” and “True Grit” to “Escape from New York.” While Kurt Russell’s Snake Plissken is clearly modeled on John Wayne’s roles (including the running gag “I heard you were dead” as well as Snake’s swagger and costuming), the MacGuffin is qualitatively different. The person in need of saving isn’t a child, it’s the President; Snake isn’t saving him out of compassion, but because Snake himself has a time-release poison inside of him. The movie itself, meanwhile, is significantly more violent than Wayne’s films.

Regardless of how one feels about the masculinity of the 1950s, the sex romps starting with 1978’s “Animal House” and the uberviolence starting in the 1980s perverted the message boys were getting about manhood.

This model also relies on the notion that there’s something inherently different from “masculine” and “feminine” energies, that gender expression exists as a binary or at least a single scale.

What if it doesn’t?

What if gender is no more inherently integral to our identities than race, physical characteristics, ability, or culture? What if the majority of what we think of as “gender” is a cultural construct that is, objectively speaking, completely independent of our anatomy?

And what if, rather than existing as a bridge between ends of a scale, the archetypes we call “masculine” and “feminine” are just two of dozens of models for being a “good” person?

When I thought about it those terms, the idea of a “men’s circle” sounded as noxious as the idea of a “white person’s circle.” The only reason I could see, from this perspective, for having a men’s-only space is to find ways to overcome our dysfunctional binary programming. There’s nothing to bond over.

Okay, but what would be the harm in continuing to call these archetypes “masculine” and “feminine”?

In writing on their identification as a Demiguy, J. Latso writes, “Even many of the cis men who claim to be looking for a ‘new’ masculinity are really trying to rehash the same old toxicity and make it just a little more respectful to other people without giving up any sort of sense of dominance or entitlement that prevails in our heteropatriarchal society.”

I’ve noticed this myself: Bullying in the progressive male circles. A competition to be “more” woke or more “allied” than anyone else. It’s a white thing, too, but it’s definitely a thing that many liberal men do.

By insisting on holding onto the gender binary, even just nominally, even while claiming that anyone can behave as they please, even while saying that we’re tearing down the Man Box, we run the risk of building another Man Box, further down the road.

That doesn’t mean we can simply declare ourselves post-gendered, and it will be done. Declaring ourselves color-blind hasn’t ended racism, it has simply hid it. I was raised to be a man. I was programmed to be a man. I need to deprogram myself from that as a man.

Even if the goal for all people is the same, of true and total gender equity, the path isn’t the same. Different people with different starting points and the same end goal will have to follow different paths.

And even if I were to declare myself a non-man today, I would still present myself to the world mostly as a man. Even at my least “manly,” my presentation didn’t include anything more unusual than long hair, jewelry, and a purse. I personally will never look no less of a “man” than “a feminine-looking man.” That means that I still have access to Male Privilege, and I can’t deny that. And part of me feels that it would be a facile cop-out to simply drop out of the gender binary battle.

I continue to reflect on these questions; I don’t have answers right now. Perhaps I never will.
—

—
Photo by Alex Woods on Unsplash

You are, IMHO, so close. When men accept women and gender fluid people as equals and people without sissifying behaviors — mocking, joking, deriding, ignoring, abusing, insulting, and physically harming — there won’t be a need to “behave” because we can all just be. By opening ourselves to this egalitarian thinking, we can all be included in community endeavors, ending loneliness and the notion of “gender failure.” The result is we can all be free to exist as people, exhibiting our strengths and weakness without fear.

FacebookTweetPinEmailShares97
wpDiscuz
1
0
Would love your thoughts, please comment.x
()
x
| Reply
Share this ArticleLike this article? Email it to a friend!
Email sent!