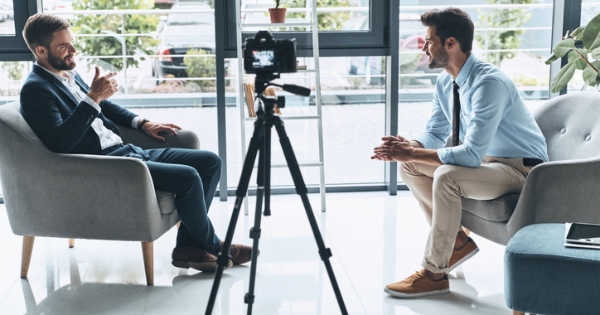 —
I started shooting video interviews with writers twelve years ago. Our first author was Clive Cussler (who just passed away last week), a somewhat legendary action and suspense writer whom I’d heard of but never read. That I’d heard of him

struck me because I’d largely stopped reading at that point in my life, and most of the writers I was familiar with were dead. I was aware that people were still writing and selling books, but nearly all of them were as unknown to me as the mega-stars of European Football.

It was a healthy starting place for a conversation. When I sat down with the likes of Lee Child and Dennis Lehane and William Gibson, I didn’t know that every one of Child’s books hit #1 on the New York Times bestseller’s list, or that Lehane had written Mystic River and Gone, Baby, Gone, or that Gibson was a pioneer of cyberpunk science fiction; all I knew was that they wrote books. I was a writer too, and even though I had not published a book at that point, I still faced that blank page every day, and I knew well all that entailed. I knew what it was to doubt my stuff, and to have people misread my stuff, and to feel like the ideas were drying up, or to feel excited and inspired by a single idea like you’re chasing a story that’s come to you. I found the authors and I always had plenty in common and plenty to talk about.

Sometimes, however, I interviewed people I considered famous, people like Henry Winkler and Caroline Kennedy and Nora Ephron. Interviewing them was a little trickier at first. I had to forget who I thought they have based the little stories I told myself about them from pictures I’d seen, interviews I’d read, or movies and TV shows I’d watched. To have a conversation, I had to learn who they actually were, to train my attention beyond the veil of those beliefs, which were like preconceived first impressions. While this required more focus on my part, it was not all that difficult. It turns out, I’d been doing it all my life.

Not, however, because I’d spent my childhood mixing with celebrities. I grew up in Providence, RI, which is a lovely city but is also a place you probably leave if you want to become famous. But Providence, even in the 70s and 80s when I was coming of age, is also what would now be described as diverse. Packed together in unavoidable proximity were black people and white people, gay and straight people, Jews and gentiles, Irish Catholics and blue blood protestants, Portuguese and Cambodian and Korean and Japanese and Chinese immigrants, old money and new money, and people living in housing projects and three-family homes and mansions.

I was the sort of person who wanted to be liked. And when I say liked I mean by absolutely everyone. The idea that somewhere someone didn’t like me could keep me up at night. I also learned early on that I was no good at fitting in, which to me meant trying to mimic the attitudes or behaviors of some group I was currently a part of. The best way I found to be liked by someone was to find something about that person that I liked. I couldn’t like their age, or the color of their skin, or what religion they practiced, or where their family had come from; I couldn’t even like if I found them beautiful. To like someone, I had to find where our humanity overlapped, which was always in joy and curiosity and fear and loneliness and surprise and boredom–all the things I would one day decide were worth writing about.

I don’t remember learning to do this. I also don’t consider it a gift. I think it’s the most normal way of relating to another person there is. It’s impossible to have a conversion with someone’s race or gender or sexuality or religion. You can only have a conversation with a person, who is always more than any of those things. It’s obviously true, yet what we actually relate to is also oddly hard to define. Who we are can’t be seen with our eyes or even touched with our hands. At best, standing near someone, you can feel their humanity in them as you feel it in yourself, formless attention in search of its own peace.

This is why I have never been a fan of identity politics or art or anything, really, though I fully understand the social and historical reasons behind their existence. When I start thinking of myself as a man, or a father, or a writer, or straight, of any of the other labels I could give myself, I feel smaller than I actually am. They no more define me than do the labels published and unpublished define two writers having a conversation. Having been both, I know how little they mean, especially when I sit down and face a page that does not care about what I’ve written, or how old I am, or if I am a man or woman–it is as blank and formless for me as for all those whoever asked themselves what they would most like to share with all the humans looking for what they love most.