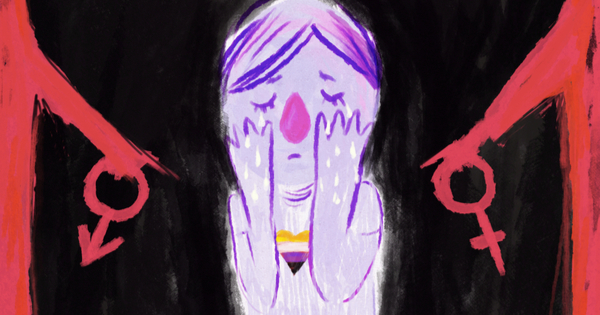 “Boys versus girls,” my aunt said.

The game of choice for this Christmas gathering was that year’s hit – the Battle of the Sexes. So “boys versus girls,” for once, made sense.

Not that it wasn’t always this way.

And, as always, I was grouped with the guys. Was I pretending to be a dude? Nope. It was always this way. One of the downsides of being a girl born with “boy parts.”

As always, I hated being put on the guys’ team. It didn’t help that my uncles and cousins were some of the manliest men out there. “C’mon, Jake,” my uncle said. “We’re gonna show them pussies.”

The game started off badly, or to say, about the usual for my family. If our board games didn’t have at least one shouting match mid-section, you might as well consider it a holiday wasted. But I don’t remember much of the game itself. Maybe, psychologically, I blocked it out. But I know there would have been the requisite number of sex- and gender-differentiating remarks coming from both the men and the women of my family.

What really bugged me, though, wasn’t my uncle’s often quite blatant sexism. It was my aunt’s remarks. They weren’t much. Just a lot of “Men are like this” and “Men can’t do that.”   The consensus among the women of the group seemed to be that men weren’t good for much but screwing up this planet.

And each remark like that thrust me, perceived as a guy, more and more on the side of an invisible line that I’d spent most of my life wishing didn’t exist.

Remember, I didn’t know I was a girl. I didn’t know that this line does exist, only everyone, throughout all my life, had been putting me on the wrong side of it. Somewhere deep down I hated the idea of the separation between men and women, of “boys versus girls,” or anything that put me, Jake, a “guy,” further from womanhood.

So, I thought I was a guy. Hated being a guy. Was convinced that, in the twenty-first century, men had it worse. And was compiling, mentally, a list of comments made “against” men. Comments like “Men can’t multitask” drove me batty. (Worse because I, personally, was a poor multitasker!)

The game went on. And on. I could have added mounds of material to my mental list, but I never wrote it down. Still, the sentiment was present, underscoring everything. Men and women are fundamentally different creatures. You, Jake, are a man.

At last (thank God!) it reached an end. With the girls’ team, of course, winning. This evoked a fresh tirade of (what I considered) man-bashing comments from the females of my family.

“See, we have to know everything about them, but they know nothing about us,” my aunt said.

My cousin said, “It’s because men are so self-focused.”

“No,” said her friend, who, of course, was female and, of course, agreed with everything that had been said at that table. She said, “It’s because they biologically can’t think of more than one thing at a time. Maybe it’s unfair to pick on them just because they have the inferior brains.”

“They’ve picked on us for centuries,” my aunt said. “It’s our turn.”

“I don’t know how men can live with themselves,” my cousin’s friend said. “I mean, if I were a guy, I’d kill myself.”

And that was it. A stupid comment, probably made more in jest than anything. The sort of verbal sparring that wouldn’t have affected most people, secure in their genders.

But what about Jake? Had I thought about suicide? Of course I had. I’d spent all of my life, to that point, surviving day to day and pretty sure I wouldn’t make thirty. I didn’t know what was wrong, but something about Jake was horribly wrong, and I hated having to be him.

And why had that comment got to me so strongly? It’s hard to say. Probably it had something to do with that stupid game we’d just finished, where every round was hammering into me the mantra, “You’re a guy. You’re a guy.” Almost certainly it had something to do with the testosterone that had been poisoning me since the day of my birth. But that little, stupid remark, by some random girl I’ll probably never see again, really struck home.

Somehow, I ended up by myself. I’d had some sort of a testosterone-fuelled hissy fit and ran off to sulk. Down a side street twenty houses down from my aunt’s house, where I figured I wouldn’t be disturbed.

But I was. Unusually. Normally my family knew when to stay away from unstable Jake and his “spasms.” Maybe this person knew that, this time, I’d been pushed too far.

It was my dad. He didn’t approach but just said my name. “Jake.” A name I didn’t like but hated a lot less than the full one I hadn’t used since seventh grade. (“Jacob” was the freak who’d been bullied out of catholic school. “Jake” was just poor old male-bodied me.)

My dad waited for me to turn and acknowledge him. Which probably took five minutes. At last, though, I turned, and my dad was still there.

We were in San Diego, so this wasn’t exactly true. But it was the subtext behind this that mattered. Comforting. Promising me, we won’t hurt you.

Maybe it’s something about testosterone, that substance that ruined the first twenty-eight years of my life. But it really is hard for two men to have a heart-to-heart. I had them with my mother, sometimes. I cried in front of her. But with my dad? Never.

And a heart-to-heart wasn’t what I needed at that moment. I was filled with such rage, such loathing of my own maleness, that, if there’d been a cliff in the vicinity, I would have jumped. It was common for me to have suicidal urges, but the desire to actually follow through with them? That was new.

We returned to my family. The game was all put away. We had a nice dinner and opened nice presents, and no one commented on Jake’s hissy fit.

And so the sun set. On a day that, if circumstances had been just a little different, could have been my last.

Facebook11TweetPin1EmailShares12
wpDiscuz
Share this ArticleLike this article? Email it to a friend!
Email sent!