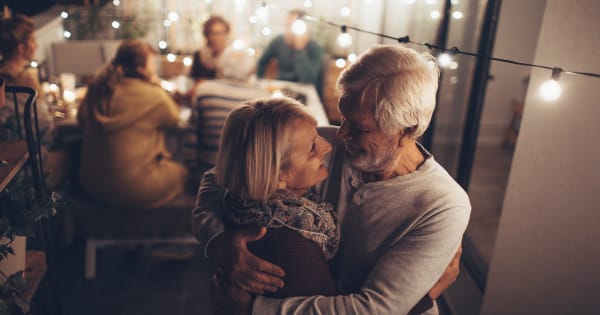 Three years ago, inspired by a dance partner whom I’d met four months previously, I composed a tune that I wanted to arrange for the 16-piece swing band that plays for that dance. I also wanted her permission to put her name to it.

After I showed her the lead sheet to ask for it, her eyes began to water. “Can I keep it?” she asked shyly, to which I said, “Sure.” (I’d written it on the computer, so it was stored.)

Only recently, however, did it hit me: I wasn’t simply making her happy. I was bringing her joy, which, as David Brooks wrote two weeks ago in The New York Times, “comes when your heart is in another [and] is the present that life gives you as you give away your gifts.”

You see, she and I have become part of an informal dance group that makes the rounds of partner dances several times a week. Over the past couple of years we have become a family of sorts, holding an informal birthday party each month honoring those celebrating; consoling people who had lost loved ones; recognizing the birth of grandchildren (most of us are empty-nesters); and, more recently, rejoicing in the recent wedding of two of our members. Indeed, for a time, I was giving flowers to women in it.

As Brooks writes, “Lovers stand face to face staring into each other’s eyes. But friends stand side by side, staring at the things they both care about. Friendship is about doing things together. So people build their friendships by organizing activities that are repeated weekly, monthly or annually: picnics, fantasy leagues, book clubs, etc.”

That has shown me just what our relationships should be about, especially in the church. We can talk about “the joy of the LORD” all we want, but that can happen only with a certain amount of bonding. As Hebrews 10:25 reads, “Let us not neglect meeting together, as some have made a habit, but let us encourage one another, and all the more as you see the Day approaching.”

Anyway, the tune ended up being finished at the end of that year, and I was privileged to dance with her at its premiere early the next; it ended up being a hit with not only our fellow dancers but also the band, which today plays it in regular rotation and thus has taken on a life of its own. In addition, it’s also being played by two other bands, one of them my own.

One other point: When you try to spread joy, it often comes back to you.

My partner turned 60 in November, so I requested that the band play the tune in her honor, which it did. Feeling humbled, I confessed to her later, “I didn’t appreciate just how much it meant to you”; to that, she responded, “I can’t begin to tell you.”

You could say that, in exercising my creative gifts, I’ve done my job.

—
A version of this post was previously published on UncommonsenseCommentary and is republished here with permission from the author.
—