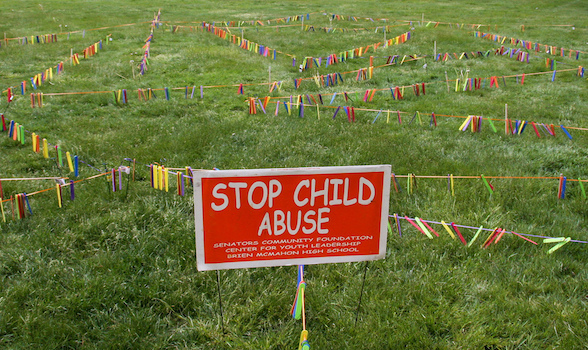 Jayneen Sanders offers 10 compelling reasons why we should keep finding ways to prevent our children from being sexually abused, and why we should provide effective methods for healing and recovery in the event that such abuse happens.

2. In 95% of cases, the sexual offender is known to the child, that is, they are a relative or trusted friend. Only 5% of child sexual assault cases are ‘stranger danger’. (Child protection Council, 1993)

4. 453 pedophiles revealed they were collectively responsible for the molestation of over 67,000 children; that averages 148 children per individual. (Abel, 1994)

5. The most vulnerable age for children to be exposed to sexual assault is between 3 and 8 years with the majority of onset happening between these ages. (Browne & Lynch, 1994)

7. In 98% of child abuse cases reported to officials, children’s statements were found to be true. (NSW Child Protection Council, cited in Dympna House 1998)

8. 1 in 3 Australians would not believe a child if they disclosed sexual abuse. (Australian Childhood Foundation, 2010)

10. As high as 81% of men and women in psychiatric hospitals with a variety of mental illness diagnoses, have experienced physical and/or sexual abuse. 67% of these men and women were abused as children (Jacobson & Richardson, 1987)

For an additional way to grow your awareness, check out Jayneen’s fantastic book Some Secrets Should Never Be Kept:

Jayneen Sanders (aka Jay Dale) is a teacher, author, mother of three daughters and an active advocate for sexual abuse prevention education both in the home and in schools.

For more information on this topic and Jay’s children's books 'Some Secrets Should Never Be Kept', 'Pearl Fairweather Pirate Captain', ‘No Means No!’and her parents’ guide ‘Body Safety Education — A parents’ guide to protecting kids from sexual abuse’ go to e2epublishing.info

All books are also available on Amazon at http://www.amazon.com/Jayneen-Sanders/e/B00BDCGZ1W/ref=dp_byline_cont_book_1

For more information on this topic, blogs and Jay’s children’s book on safe and unsafe touch: 'Some Secrets Should Never Be Kept' go to www.somesecrets.info

Facebook138TweetPinEmailShares138
wpDiscuz
2
0
Would love your thoughts, please comment.x
()
x
| Reply
Share this ArticleLike this article? Email it to a friend!
Email sent!