Get Daily Email
Join/Login CLOSE
Home / Featured Content / There’s a Power in People Coming Together. And That Power Fuels Hope. 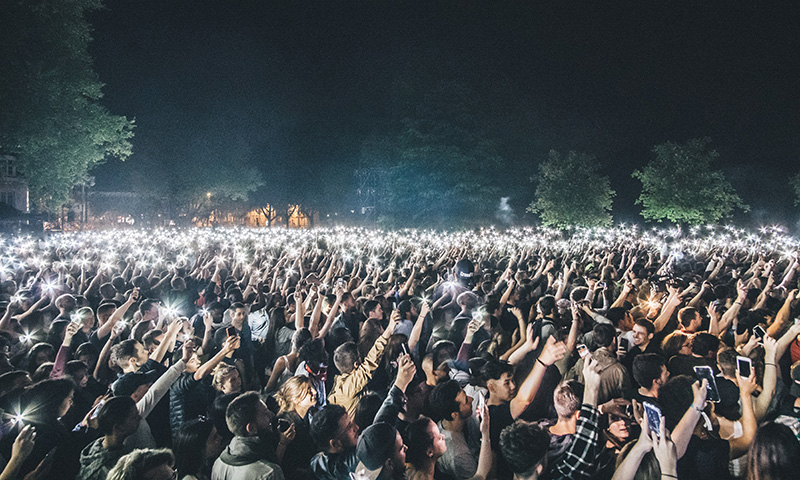 —
I remember my first concert. I was five years old and my Dad scored last minute tickets to take me and my sister to see KISS. I was full of questions, not sure what to expect. Would it be loud? Scary? Would I like it or would I spend the concert curled up in the chair covering my ears?

I fell in love. Not with the band, I barely remember the music. But with the crowd. With all of the people. I watched as people filled the coliseum, the excitement in the room growing as more people found their way in, the sound of the crowd growing as anticipation for the show built. I took it all in, the glamorous women in their silk blouses, the men with the tattoos and cigarettes clenched between their teeth. The teenagers darting through the crowd. People buttoned up and dressed down. I’d never seen so many different people gathered in one place.

The music started and I watched, enthralled, as the crowd all rode the same wave of energy. I felt my skin prickle when the audience sang along, when they erupted in euphoric applause. It was connection to a thousand people at once. It was exhilarating. I’ve been in love with seeing live music ever since.

I love music, but it’s not just the music that has me going to see shows for all these years. There’s something special that happens when people come together. There’s a humanity in showing up to share an experience. There’s connection with people who are otherwise strangers. It gives me hope every time I go to a show.

Hope because there is power in people. There is energy and strength in being united and finding a common purpose. Hope because for all of our differences, there are times when we can come together and make something incredible happen. Hope because we are all broken, flawed, beautiful people just trying to make it in this world.

Idealistic? Yes. But it’s what I have always found to be true. There is no limit to what can happen when minds meet and ideas are exchanged.

Sometimes it’s happenstance, these moments of shared emotion or thoughts.

There’s something happening right now that is very deliberate. It is people coming together to discuss the hard issues. Issues that can be difficult to tackle. Racism, sexism, mental health, intersectionality. You know, the things you don’t talk about outside of your circle, the things you were always told not to discuss in polite company. Those  things. Those are the issues The Good Men Project is taking on. The conversation no one else is having is kind of their thing. They’ve been doing it for over seven years and every month 3 million people drop by to read and be a part of the conversation.

I started writing for GMP a year ago. Since then, I’ve come to know some of the people involved. I’ve watched them spend countless hours and endless emotional energy, working to make the conversations happen in a productive way. I’ve had conversations with them that were deep and meaningful and eye opening. None of them swim in the shallow waters. The deep end is where they live, and they’re not afraid to go there.

The more I’ve come to know them and the causes that motivate them, the passion they have for making this world a better place… the more I’m in awe of what they are doing. I have seen bridges built where a gulf stood before, and understanding attained where obstinance once resided. I’ve watched and listened as some of the most difficult and important issues have been broken down by patient and skilled leaders. It has been breathtaking to watch and it’s been something that has made me inch closer to the person I want to be.

Now the Good Men Project is taking the conversation they’ve been having and making it interactive. Collaborative. Beyond the comments section on the screen and into a real dialogue. Every day of the week there are interactive phone calls calls on different topics. Readers are invited to become participants and ideas are shared. I’ve been honored in the past to co-lead these calls on Monday evenings for the Stop Sexism Social Interest Group.

We’re building something here and we need your help. We are taking those hard conversations and we’re making them easier. We’re growing movements and sparking ideas. We’re trying to change lives, change the way we have conversations, change the world.

Idealistic? Sure. All I know is when you get a group of people together who are passionate about a shared purpose, amazing things can happen.

Please check out what they are doing. Become a member. Discover the phone calls.

A version of this article originally appeared on Drifting Through.
—

RSVP to get dial in information for our weekly, interactive phone calls here:

Photo by Maxime Lebrun on Unsplash

FacebookTweetPinEmailShares14k
wpDiscuz
0
0
Would love your thoughts, please comment.x
()
x
| Reply
Share this ArticleLike this article? Email it to a friend!
Email sent!