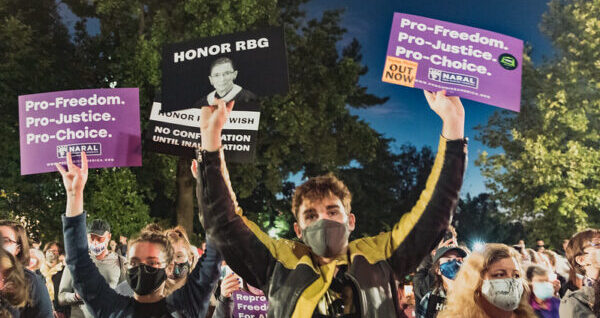 It is essential to woman’s equality with man that she be the decisionmaker, that her choice be controlling. If you impose restraints that impede her choice, you are disadvantaging her because of her sex.

Access to a safe and legal abortion 10 years ago and my wife’s ability to maintain control over her own reproductive health decisions is why we now have three happy, healthy kids today. And the late Ruth Bader Ginsburg’s presence on the Supreme Court was a big reason that bodily autonomy remained intact.

But with RBG’s death, that autonomy is now threatened in a way it hasn’t been since Roe v Wade became the law of the land more than 40 years ago.

In July 2010, when I chronicled my brush with anti-choice protesters right here on these pages of which I was an editor at the time, my wife and I were trying for our second child after several miscarriages. We finally had one that stuck and celebrated at the 12-week mark, only to be hit with the disturbing news our unborn baby had Sirenomelia (Mermaid Syndrome). A 1-in-100,000 fetal abnormality that meant our baby’s legs were fused together with no kidneys, bladder, or anus—and no chance of survival outside the womb, according to a team of doctors at a renowned Boston hospital. And so we made the heartbreaking decision to terminate the pregnancy instead of further endangering my wife’s health by carrying to term or enduring a stillbirth.

We were verbally accosted by anti-choice protesters and called murderers (and much worse) by the Internet mob after I published a video of me peacefully confronting the craven religious zealots outside the clinic who had shattered my wife’s already fragile emotional well-being on the toughest day of her life. The hate mail was (and still continues to be) an ugly, vile collection of threats, indecency, compassionless cruelty, and misguided religious extremism.

Now that Ginsburg is gone and the craven Republicans who refused Merrick Garland a hearing with 11 months left in Obama’s term have hypocritically decided to ram through a nominee for Donald Trump with only 45 days left before the election despite publicly vowing they wouldn’t four years ago, there is a very real chance this Court will be the conservative majority necessary to effectively make abortion illegal.

I devoted an entire chapter of my book, Raising Boys to Be Good Men, to the importance of teaching boys that bodily autonomy for women is sacrosanct and stripping them of it is unequivocally misogynistic. The people who are working tirelessly to make abortion illegal aren’t really pro-life, they’re for forced birth. They’re for controlling women’s bodies. They’re for the kind of impediments Ginsburg shielded us from for decades which relegate women to second-class citizens.

If you want to make abortion a crime then you’re someone who wants to punish women for maintaining control of their own bodies. What we should be teaching boys (and everyone, for that matter) is while they have every right to dislike abortion and even be against it personally, they have no right to take bodily autonomy away from anyone else. Because the minute you advocate for making abortion illegal, you become an advocate for stripping women of the basic right to make their own reproductive health decisions and then punishing them for it criminally.

That’s not okay. It’s never okay to paint a picture for young boys that if they object hard enough they can eventually control bodily autonomy for others. It’s never acceptable for boys to be sent the message that their personal views and beliefs outweigh the personal decisions (that are none of their business) made by a woman with her doctor and partners.

Because when that happens we’re well beyond the slippery slope. We’ve crossed over into the realm of allowing the government to have control over the bodies of half the population. We’ve taken up residence in Gilead.

Ginsburg’s watch on the wall is unfortunately over, but the ideals she stood for should not be.

There is likely nothing that can be done about the lying, hypocritical cast of conservative characters who have no qualms about going back on their word from four years ago who will undoubtedly approve an anti-choice nominee. Republicans control the Senate and they have the votes to make it happen.

But what we can and should focus on is building up a generation of boys who avoid becoming entitled, toxic men. Who recognize that equality is impossible for all when some are so severely limited in their freedoms. Who understand the harm in disadvantaging a person based solely on their sex for a decision that is none of their concern and that they’ll never have to make.

I ask no favor for my sex. All I ask of our brethren is that they take their feet off our necks.

Aaron Gouveia is the author of Raising Boys to Be Good Men and the upcoming Men & Miscarriage coming Summer 2021.

Aaron Gouveia is a father of three boys and husband to a woman far too good for him. He is the author of "Raising Boys to Be Good Men: A Parent's Guide to Bringing Up Happy Sons in a World Filled with Toxic Masculinity" and a book coming in Summer 2021 about men and miscarriage. When he's not parenting or working, he's caring far too much about the outcome of New England Patriots games.