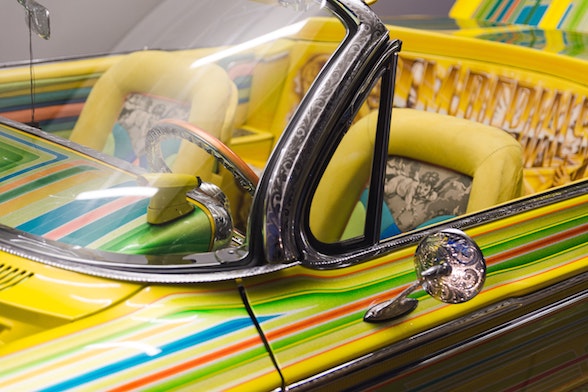 Growing up in Santa Fé, New Mexico—about 25 miles south of the Lowrider Capital of the World (Española, NM)—cars were a big deal.

Make, model, paint job, hydraulics, lighting, and tunes were one thing, but showing off those cars was something else altogether.

One of the main ways to do this was the cruise line. Every Saturday night in the summer, people loaded up in their cars and drove slow and steady along the street next to the Santa Fe River creating a flow of supped up lowriders and every day family wagons.

The point of it all was to see and be seen, and whether you had a killer ride to show off or not, you were cruising—participating in a long held tradition of both Chicano and lowrider culture.

I remember riding with my cousin (about six years my senior and the closest I had to a brother growing up) in his truck. Not a lowrider or jacked up (or down) in any way, just a truck and just something to do.

That’s what it was like in a small town in the summer before social media, the internet, and 24-hour news. It was something to do.

Back then, the cruise was a vital social engagement that offered visibility and a way to interact at a safe distance. You might make eye contact with a señorita, hear about a party and then follow the line up to the spot. Or, you might throw shade at other riders, might get in a fight, or worse, a violent standoff.

Though that never happened in my recollection, some cruise lines have seen their fair share of bad stuff.

But bad stuff aside, the cruise is back now, and the reason is similar to what it was in the past. It’s something to do.

In these days of isolation, a simple drive away from home is a godsend. Even if we’re just going across town to pick up food, the whole family comes along. We enjoy going places because that’s about all we’ve not nowadays.

Our cars are much like an extension of our homes, and our homes are safe, the dwellers inside are just like the passengers inside the moving bubble of social distance.

While I may be driving a sensible SUV these days, I dream of getting that vintage El Camino one day so I can drive it slow to show it off. That’s the other thing we have in abundant supply these days: dreaming of another time.

Photo by Theodor Vasile on Unsplash