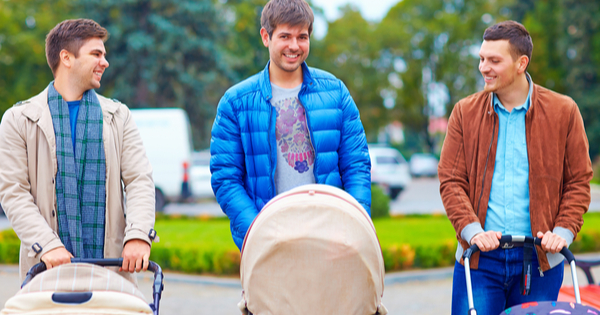 Men don’t want advice and are not strong parenting consumers, so we are not going to talk about them.  I heard that statement over the weekend at a conference I was attending.  Now, if the conference was in person, I would have immediately stood up and had a nice little debate.  But since it was all virtual, I smashed my spacebar and got a drink.

As someone that writes about parenting from a father’s perspective, you can imagine how this statement irked me.  And as it was said in front of editors of some popular parenting magazines, it was probably a good idea that it was not in person.  I wonder how much you can cuss before someone stops paying attention to you and just thinks you’re crazy?

I read a lot of parenting stuff throughout the week, as you can imagine.  I write a lot of it as well.  And what I find is that it’s not that dads are not consumers of parenting advice, but that the parenting advice given to dads is total garbage.  There, I said it.  It sucks.

But how does it suck? Now, this is where we can have some fun and work off some steam.

Dads, don’t forget to hug your kid?  Did you hug your kid?  Hug your kid more.  Hey Dad!  Remember, kids need to have food.  And after they are fed, take them for a walk like a puppy!  Here, have a snack, you good boy.

There are two types of fathering articles that run on many parenting sites.  It’s either very sentimental or demeaning and condescending.  It’s about a father loving his daughter, or a dad that is so inept he can’t remember that children need pants on before they go to school.

Now, I don’t want to be overly critical here.  I understand, especially now, moms are carrying the brunt of the childcare load.  And I agree that it’s not fair that women are given the short end of the stick.  As a stay-at-home dad for thirteen years, I’ve been down that road.  And yes, there are many single mothers and children that deal with absentee fathers.

So, to me, it’s not that dads don’t want to consume parenting articles or advice, it’s just that both suck and are not written for dads.  It’s terrible.  “Hey dads, try sidewalk chalk to get your children outside!”  What kind of crap is that?  That’s not written for dads.  That’s for a guy that is too dumb to tie his shoes.

Instead of saying that dads don’t want advice, how about we talk to them like actual parents and provide content that makes a difference in their lives.  In general, dads don’t want the touchy-feely stories.  And we don’t want long walks into our heads.  What we do want is actual answers.  We want a funny story that teaches something specific. We want fatherhood advice, dammit!

Is that out there?  Hell yes it’s out there, but you won’t find most of it on big parenting sites.  Because those sites are not for us.  It’s not that we don’t want parenting advice, it’s that it’s not given in the first place.

Come with me, let’s show you where to go.  Who likes podcasts?

There are a ton of podcasts that speak to fathers.  I cohost Dadhouse, and it’s full of fatherhood advice.  Also, check out #Fatherhood is Lit by James Lopez.  How about NOMADad or The Art of Fatherhood. This is just a quick list of where you can find guys that are all not only talking about fatherhood, but dads are CONSUMING it.  I could do this all day.  Writers Jason Greene, Andrew Knott, and David Stanley all write about their experience.  And of course, my very own column every week here at The Good Men Project.

And all this is just the tip of the iceberg.  Fatherly, Life of Dad, Fathering Together, Movember, and The Good Men Project.  Seriously, it doesn’t appear that dads don’t want advice.  What it looks like from my angle is that dads want advice that speaks to them.

What really gets me is that dads are not seen as part of the parenting conversation and it’s very frustrating.  It discounts not only our contributions but puts us in the backseat of parenting.   It minimizes our struggles and our need for a community.  We are the sad kid sitting on the bench at the playground, which has actually happened to me at the playground with my kids.

There are so many fathers out there every day giving it their all.  From working dads to stay-at-home dads, we are all sacrificing to give our children a better life.  We lay awake at night worrying about the state of the world and we 100% feel the responsibility on our shoulders.  Yes, we want help but not the kind typically given.

I want to know how to talk to my son about race and how I can be an ally.  I need to hear someone’s experience in dealing with our children’s mental health and how we can navigate that.  And for the love of God, please stop asking me to craft something from Pinterest!  Dads don’t do that. If I’m going to craft, it’s going to be a ballista.

If we want better fathers, start treating them as parents.  And yes, that means holding them accountable when they don’t live up to their responsibilities.  But it also means giving them the resources and content that speaks to them directly.  We will consume the content in which we see ourselves and not the content that sees us as unimportant.

So yes, we want advice, but maybe just not yours.