Get Daily Email
Join/Login CLOSE
Home / Featured Content / ‘Dads for Daughters’: When Men Stand Up For and By Their Daughters 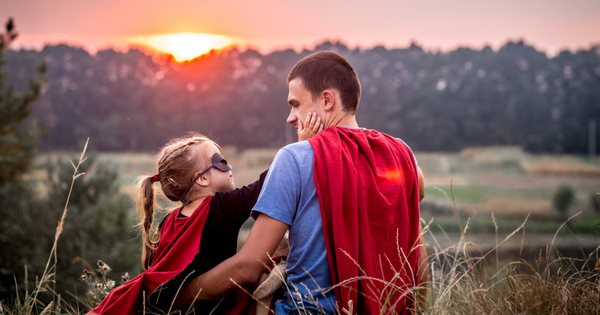 In her latest book, Dads for Daughters, author Michelle Travis lays out a persuasive and comprehensive action plan for all dads on how they can transform their world, their daughters’ world, and the world at large by starting to stand up for and by their daughters. Part two of my recent conversation with her about the book and its important and essential message is below.

JMA: When talking about the overwhelming need for new family leave policies, you specifically point out that expanding paternity leave is vital for advancing women’s equality. Can you explain why you think this is true?

MT: When women become moms, their bosses tend to view them as less competent and less committed to their jobs, which results in fewer promotions and less pay. In contrast, when men become dads, they actually tend to get more raises and promotions. That’s unless men take significant paternity leave—in which case they can face even greater career stigma than women. These gender stereotypes can become self-perpetuating. Higher-earning men understandably prioritize work over childcare because the stakes are too high to do otherwise.

Expanding support for paternity leave is a critical step in breaking this cycle. Until employers view both men and women as involved parents, employers won’t offer equal advancement opportunities to women nor prioritize the workplace flexibility that all working parents need and deserve. So equalizing women’s opportunities at work depends upon equalizing men’s caregiving responsibilities at home. Dads of daughters are well-situated to be leaders in supporting paternity leave, in part because having a daughter tends to decrease men’s support for traditional gender roles.

JMA: As a father of a daughter myself, one of the most moving parts of the book for me is how you stress that we as dads have to put ourselves in our daughter’s shoes and view the world as she sees it. Why do you think this is so important?

MT: Being the dad of a daughter is one proven way to build men’s empathy for other girls and women. Empathy, in turn, is an essential leadership skill. Men especially gain insights when they learn from their older daughters’ experiences of gender bias and work/family conflict. In one study of male CEOs, researchers found that the most vocal women’s advocates were more likely to have a daughter who had faced sex discrimination herself.

The empathy-building that can come from being an engaged father of a daughter is important because it’s human nature to assume that everyone’s experiences in the workplace are the same as our own. That makes it understandably difficult for men to recognize the subtle causes of gender inequality. When men hear the challenges that their daughters are facing, it enables them to look more critically at the external barriers to women’s success, rather than assuming that a shortage of women leaders is due to women’s lack of interest or commitment.

One of the dads whom I interviewed for the book shared a wonderful story of his own empathy growth. He explained that as a long-time manager, he had always viewed employees’ childcare arrangements as both a personal issue and a fairly straightforward task. After he felt his daughter’s extreme stress trying to secure reliable childcare to support her career, however, he started viewing workplace flexibility as a leadership imperative.

JMA: In one chapter of the book, you encourage men to be more than just sports fans when it comes to their daughters and sports. What do you mean by that?

MT: Sixty-six percent of American men describe themselves as sports fans (seventy-six percent of upper-income men). At the same time, glaring gender inequalities exist in sports at every level. Twenty-eight percent of public high schools are failing to comply with Title IX’s demand for equal athletic opportunities for girls. There are 63,000 fewer college team slots for women than men. Even the wildly successful U.S. Women’s Soccer Team faces a massive gender pay gap.

This gives dads a fantastic opportunity to combine their devotion for their daughters and their passion for sports to help advance gender equality in athletics. An easy first step is simply to watch more women’s sporting events. This will not only inspire your daughters but can also help increase the dismal level of media coverage for women’s teams. Dads of daughters can also report inequalities in their daughters’ school athletic programs to Title IX officials, coach their daughters’ sports teams, or nominate female athletes for a Women’s Sports Foundation award. By taking these steps to become more than just a sports fan—but also a women’s sports ally—dads of daughters can expand the lifelong benefits of health, self-esteem, confidence, and perseverance for our next generation of girls.

JMA: What are some of the ways that dads of daughters can leverage their political power as referenced in the book?

MT: If more men connected their father-daughter relationship with their ability to select, support, and lobby government leaders who can advance women’s equality, we could amplify our voices. Dads can start by thoughtfully exercising their right to vote by supporting candidates who will fight for policies that economically empower women, such as paid family leave, paid sick days, equal pay enforcement, and access to healthcare.

Dads of daughters can also encourage more women to run for office. When women run for office, they’re elected at the same rate as men. But far fewer women throw their hat into the ring, largely because they aren’t actively recruited as often as men. Dads of daughters can correct this imbalance by nominating women friends and colleagues as potential political candidates through the She Should Run organization, which helps launch women candidates’ campaigns.

Dads can also begin building political power closer to home by inspiring their daughters to become politically active. The IGNITE organization’s “Empower Your Daughter” initiative offers free toolkits and teen discussion guides for dads to engage their daughters in public service and build their political ambitions.

JMA: Looking back on all of your extensive research for the book, what are some of the things that give you hope for the future when it comes to dads and daughters and the battle against gender inequality?

MT: Knowing that there are so many dads of daughters who are stepping up as ready, willing, and able male allies have filled me with hope for our ability to accelerate progress towards gender equality. It was deeply inspiring to hear so many men share their heartfelt stories of how their father-daughter relationship allowed them to see the world through a more empathetic lens. I’ve also been inspired by women’s capacity to invite men into conversations about gender equality and to see the powerful impact that these partnerships can have. We have much to learn and gain from each other. So, let’s join forces and get to work!

Dads for Daughters by Michelle Travis is available at all major booksellers.