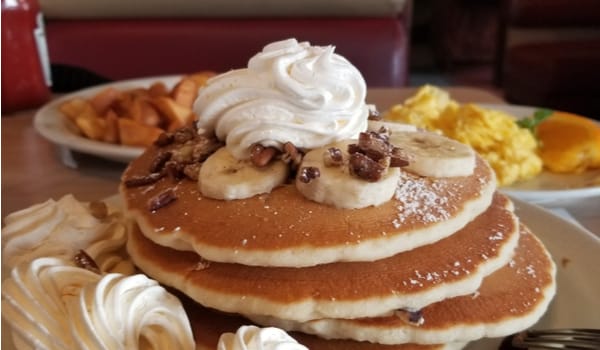 My friend Moe pointed at a framed photo high up on the wall, behind the register of a very busy diner in Brooklyn.

Fran was Moe’s wife.  She passed away a few years back after a tough and lengthy illness.  Fran was also my boss back in the day, when she led a nonprofit neighborhood revitalization group that did much in New York City and beyond to make the dream of home-ownership a reality for well-deserving, inner-city residents.

“Whenever we came in to eat,” Moe continued, “Gus would always take Fran in his arms and dance with her.  A few steps on the way to the table, and she loved it.”

It’s a nice memory for Moe, and for me.  I thought the world of Fran, one of the smartest people I ever met, and one of the most determined.  She set her mind in the 70’s to bring banking investment and fair housing regulations to neglected Brooklyn neighborhoods, and when she finally had to stop more than three decades later, no longer able to overcome a disease that shook her body but not her spirit, she had built a powerful and influential organization that transformed lending practices nationwide.

The diner was packed, and Moe and I got in line and waited for a table to open.  He told me more about the place as we inched our way forward, his complimentary words supported by the cheery talk and laughter of customers, the clinking of silverware scraping plates, the smell of crispy bacon and syrupy pancakes being served, eggs fried and scrambled on the grill, steaming hot coffee poured into mugs.  It was a welcoming, warm place, and not fancy at all.  Moe told me that almost all the waiters had been there for years.  It made one think they liked their jobs.  That they were treated well by management.  It made me feel even better to be there.  I began to understand the line, and I was glad for it — people supporting a place that does it right.  That sort of thing.

We finally sat down and the waiter glowed when he recognized Moe.  He gave me a tip on which pancakes to choose (banana with walnuts) and brought us coffee.  As we drank I asked Moe more about the diner, and the neighborhood.  He said at one time it was a tough area, a “Ghetto.”  It certainly isn’t anymore.  Like much of Brooklyn, the landscape is defined by buildings and brownstones and commercial enterprises on the high end of the real estate market.  It’s a happening spot, evidenced by the sea of good-looking, smartly-dressed young people; diverse, for sure, but all seeming to be on top of whatever game they are playing.

“You know,” Moe told me later, as he mused again about the neighborhood, “the first time Fran got involved in housing, she joined a group on the block that held meetings in the evening.  One of the people she met there, a young Hispanic man, was worried about her walking home alone after, and would escort her to our building.  He even told her, ‘From now on I’m going to be your bodyguard.’  So he became her protector, and Fran became his mentor, even encouraging him to buy a home in the neighborhood.  But he always debated with her about improving the area too fast and too much: that making upgrades would drive up the demand and cost for real estate and drive out folks without the means to keep up.  He would say, ‘Each tree we plant means ten Hispanic families will have to move out.’”

A few hours later, I was driving back to my home, having dropped Moe off at his.  As I navigated the streets, needling my way through traffic, I thought about life: how times change, people pass, and life goes on.  As I finally neared open road, I settled on the idea that there is no way to be certain about the future – if a new diner, for example, will make a success of things, or what will happen to a neighborhood when money flows in or leaks out.

And there is no way we can change the past — it happened, and that’s that.  But between these absolute truths lies the present.  And when you are in the company of a person who can tell a good story, like Moe, about good people, like Gus, Fran, and her unofficial bodyguard,  it doesn’t really matter where you’re going or where you’ve been.  The only thing that counts is being right there, in the moment….with a big plate of pancakes, if you can.

Facebook35Tweet7Pin1EmailShares43
wpDiscuz
Share this ArticleLike this article? Email it to a friend!
Email sent!