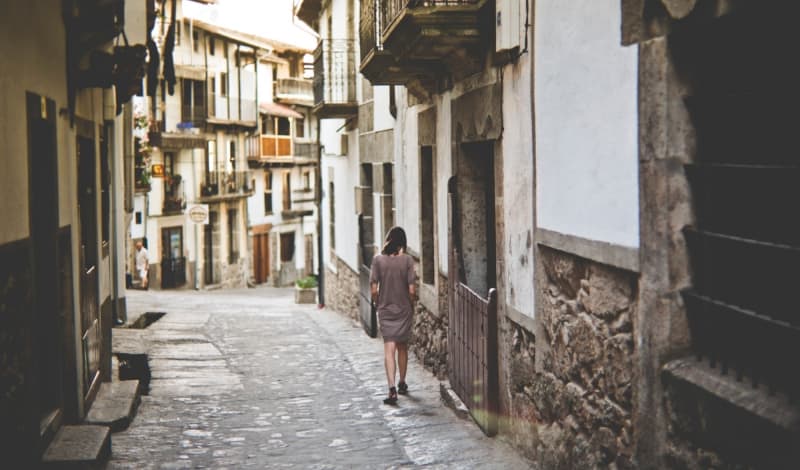 Here’s a question I have for men: when was the last time you were scared?

I mean, not just worried, but scared for your well-being. That you were in trouble. That for some reason, you found yourself threatened, and that it would take some combination of the good will of another person (or lack of bad will) or nothing other than luck to not get robbed, hurt or worse.

That your physical safety was at risk.

If you’re like me, you’re struggling to come up with an answer.

Maybe you had a close call on the highway.

Maybe you were out of town and got a little lost…and had to wait on a street corner while a car arrived to pick you up. That one happened to me a few weeks ago. I was nervous and frustrated, and realized I was in a bad spot, but was I really scared? Nah.

I scrolled through Twitter on my phone, looked around for a bit, kept calm and waited for my ride.

Here’s my message to men about this: we don’t realize how damn lucky we are to navigate through the world without fear.

And you may or may not realize how much fear women live with, daily, doing nothing other than crossing the street, walking to a car, taking out the trash or getting the mail, even getting off an elevator.

I hear and see comments from men asking, what now? What do I do? How am I supposed to navigate around and exist in this #MeToo and #TimesUp world?

My answer is twofold: 1) Keep listening. 2) Consider the world women inhabit, and take the time to imagine what that must be like.

My hunch is, if you continue to do those two things, your perspective on what life is like for women will change, and you’ll find yourself, perhaps slowly, but still, eventually, becoming more cognizant of everyday situations that you can help make better, in small and big ways.

Living in constant fear, carrying and measuring constant risks to your physical well-being, is exhausting and unhealthy. It leads to stress, which can lead to all sorts of emotional and physical problems, not to mention exhaustion and frustration.

In real life and on social media, men often retort, defensively and derisively, that “not all men” are guilty of sexual harassment and assault. This is undoubtedly true. Few of us, in fact, have engaged in the kind of behavior someone like Harvey Weinstein is accused of.

But #MeToo is not about the extremes. While it includes the extremes, to me the more powerful message is how intrinsic sexual assault, harassment and inappropriate contact and words directed at women is.

Almost every woman has a story. That’s what made #MeToo so powerful. Most acts were committed by men who are not rich, famous and powerful.

Whether men realize it or not, and most of us, like me, didn’t, women have been suffering the consequences of boorish and inappropriate male behavior for generations. It is systemic and endemic.

That’s why the “not all men” response is meaningless and irrelevant. Simply by being male, we contribute, knowingly or unknowingly, to the unwritten rules of behavior we’ve become accustomed to.

In other words, male privilege is a thing. From our homes to our offices, from private spaces to public spaces, men experience a world far different than that of women.

Or rather, we experience the same world, only in far different ways.

For those who would protest, or say I exaggerate, I refer back to my first action item about what men “should do” in response to #MeToo.

And that is to listen. To continue to hear what women are saying, and what they are telling us.

Below are some tweets I’ve seen that have forced me to stop and think.

Hey guys, if you’re walking to your car at night and you’re behind a girl, do her a favor and turn a different direction or slow down
Do anything to give her space some space
Don’t torture her with the thought that you could be dangerous

Now, have I ever assaulted or mugged a woman before? No.

But have I ever walked behind a woman on a street, oblivious to her and her surroundings and maybe even my own? Probably more times than I can count. And how many of those times did women feel uncomfortable in my presence?

In those moments, even if I din’t know it or appreciate it, I represented a potential threat. A simple awareness of this and an even simpler shift in behavior can alleviate this kind of fear:

I had a guy walking behind me down a sidewalk at dusk and he crossed to the other side of the street where there was no sidewalk to pass. It was one of the kindest things a stranger ever did for me.

Just imagine, men, the impression this left, that days, weeks, months or years later, she still remembers this guy doing nothing more than giving her space.

Think about the tension and anxiety that was present as this scene first developed — and then the sense of relief given to her by the stranger simply crossing the street.

Every day, and all the time.

Every day, women are surrounded by potential threats. In this environment, “not all men” is meaningless. Because it only takes one.

And in these moments, that’s exactly what we are.

One man, with the ability to recognize and influence and change a situation fraught with potential danger to one as innocuous as it should be.

don’t think this occurs to most guys, so: when you get into a hotel elevator with a strange woman, try to press your button first. and if you get off on the same floor, exit the elevator first.

In the follow-up, she acknowledges how this is contrary to what we normally assume is the polite thing to do, which is to let the woman off first. While I’ve never thought to do this myself, I have noticed, that when walking behind a woman in a hotel hallway, that I felt menacing, even though I was doing nothing more than walking to my room. I stupidly thought, there’s nothing I can do but get to my room and close the door.

But there was and is something I can do. Stop in my place and create enough distance where that lingering, menacing, following feeling doesn’t exist anymore. Or, as I now know, get off the elevator first.

If a man is on the same floor as me and I get off first, I either figure out a way to let them pass by me, or step to the side and fake call someone. Most men do not understand the temporary panic we feel in these situations. https://t.co/MKqZ1H2wQF

Women adjust to this situation more than we realize. That places a burden on them they shouldn’t have. Jemele is right: most men don’t understand or have any conception of the “temporary panic” women constantly experience.

Staying in hotels is fun. It’s different, it’s a treat, it’s a break from our everyday.

It certainly isn’t, or shouldn’t be, a source of anxiety and fear.

But I now know, again, really, for the first time, that these mundane situations are exactly the kinds that can create anxiety and fear. And the simplest response or modification can change the entire dynamic of these situations.

This one is a tad different, since not all of us are professional drivers, but I include this thread for men’s awareness:

Last night I took a @lyft home from my friends bachelorette. It was a line, so there were two people in the back seat when I got in. Once they were dropped off, the driver immediately leaned over to me and asks “do you have a boyfriend?”. I paused, and didn’t respond.

Read the thread. The response by Lyft to her complaint speaks for itself. What I want to get across is that this kind of experience is not uncommon.

Which means for women, the simple act of ordering a Lyft or Uber is one inherent with potential disaster.

I ask again, men, have you ever thought this way about ordering a car service?

Have you ever given one second of thought to your physical well-being when getting into a car, wondering what the driver might be like, hoping he will…be what? Just a driver instead of a violent, threatening potential rapist?

This is the luxury of male privilege. We don’t have to worry about this shit at all. Yet for women, it’s literally an everyday occurrence. And that sucks.

I’ll end with this one:

I once said no thank you to man when I was 19 and didn’t have an excuse… and he punched me in the face. After that whether or not I have a boyfriend, I say I do. Being a woman is truly, constantly scary. It’s like existing on thin ice. https://t.co/cw1BCc9XUB

It would be easy for a guy to to say “not all men” here, and they would probably be correct: not all men are this violent.

But it doesn’t really matter, does it?

Women have no way of knowing which ones of are and which ones aren’t.

So we all come with a red flag. We all carry a risk. We all contribute to the “thin ice” that women skate on daily, an impossibly weak and fragile separation between security and threat, innocence and guilt, fear and peace.

Men, if you think it’s not fair for us to be painted that way, you’re right. It isn’t fair.

It’s even more unfair for women to have to live with the consequences and persistent threat of that thin ice. That’s really what’s not fair.

That’s what we have to work towards changing. Every interaction, every walk on the street, every off-hand comment, every touch…it all adds up.

Our mantra cannot be “not all men” because that’s vapid and pointless. Instead it should be “not any men.”

And if that seems ridiculous or absurd or impossible to you, well, then, that, my friends, is something I’d call pretty damn scary.

Facebook4Tweet7PinEmailShares11
wpDiscuz
0
0
Would love your thoughts, please comment.x
()
x
| Reply
Share this ArticleLike this article? Email it to a friend!
Email sent!