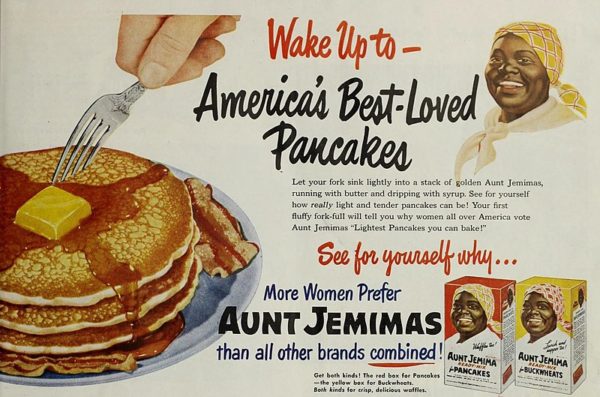 Thanks to performer and activist Kanene Ayo Holder at Black Issues Issues for the conversation that led to this article. Follow her on Medium and on Twitter.

So, here I am, writing a quick article because people post things on the internet. For example: 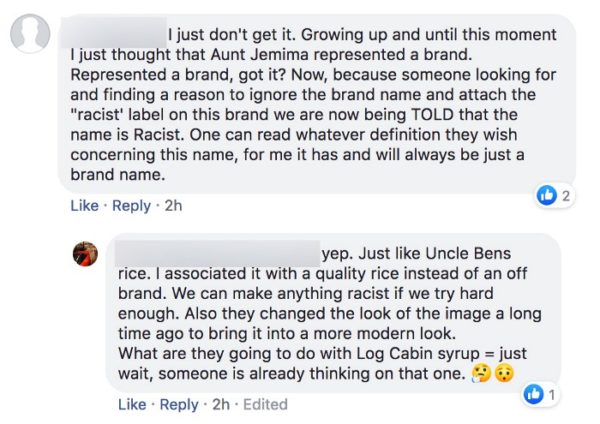 (My guess is she has actually has figured it out and doesn’t care.)

God forbid white folks just say. “I can easily give up Uncle Ben’s Rice or Aunt Jemima’s Syrup” BECAUSE IT LITERALLY COSTS ME NOTHING PERSONALLY TO END THE USE OF HUNDRED YEAR OLD MARKETING IMAGES BASED ON THE FALSE NOTION OF HAPPY HOUSE SLAVES TO SELL US GODDAM SYRUP.

So what does Aunt Jemima have to do with racism?

This is from WikiPedia:

Aunt Jemima is based on the common “Mammy” stereotype, a character in minstrel shows in the late 1800s. Her skin is dark and dewy, with a pearly white smile. She wears a scarf over her head and a polka dot dress with a white collar, similar to the common attire and physical features of “mammy” characters throughout history.

The term “Aunt” in this context was a southern form of address used with older enslaved peoples. They were denied use of courtesy titles.[14] A character named “Aunt Jemima” appeared on the stage in Washington, D.C., as early as 1864.

The fact is, not enough White folks are learning about and acknowledging the simplest cultural stuff (namely, how slave era images and language are still on our syrup bottles.)

But this battle Black men and women have to fight for every inch of progress against entrenched white nationalist voices in our media, in our police unions, in the goddamn White House is exhausting. Thank you to those white folks among us who are doing the work and even may have been doing it for decades. Seriously, thank you. For the rest of us? It’s time for those us of, who fancy ourselves to be enlightened, to get into anti-racist work entirely. To turn it up a notch. To get loud. And the first step activists are asking of us is to do the work to educate ourselves. So here’s a place to start that work.

Oh, and ditch the syrup.