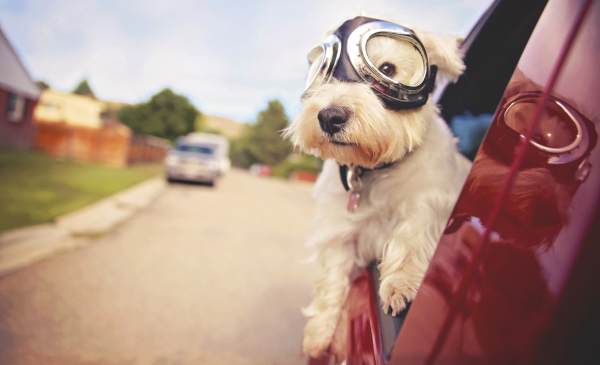 In February, 2019, I bought the “Extended Service Plan” from my auto dealer: $200 for unlimited oil changes for two years. Since then, I’ve had my oil changed three times. (That’s at the recommended-for-my-car “Every 7,500 miles.”)

When my Mrs. is interested in freedom for her weekend or will be traveling herself or whenever the stars align, I rid her of our doggy, Kitty. Sh’up, that’s his name, and it’s very butch.

On occasion, my travels take me through Madison, Wisconsin, where the woman I call “Mother”—said in a non-Norman Bates way—lives.  So, I up and away with Kitty, drop him off at my mom’s house—she calls him her “Grandpuppy”—and then I head to my gig.

It’s about three hours, door-to-door, from my home to hers. Kitty refuses to leave my lap. There is always a perfectly good, empty passenger seat for him to curl up on, but he spends approximately 90 minutes of the ride sitting and looking around at the scenery we are zooming through, and 90 minutes sprawled out and sleeping.

All on my lap; never anywhere else in the car.

I’m not sure if it comes from anxiety or just an internal tic, but at some point in the drive he usually decides it’s time to lick something obsessively. Sometimes it’s his paw; more often than not it’s the seat next to us or a spot on my jeans.

I try to discourage the paw-licking, but according to most websites (and our vet), if it doesn’t go on for hours and hours, it does no harm and probably sets his mind at ease. That being the case, I usually allow the cushion or knee to be turned into a slobbery spot I then have to deal with.

Oh, the joys of pet ownership.

On my most recent drive, Kitty did something a little different from his norm. He was sitting up on my lap, looking around, looking at me, and looking around some more, when a spot on my leg at about mid-thigh captured his attention.

The licking began, and I rolled my eyes and ignored it.

Five minutes later, he stood up, stretched, spun, decided that my other leg had a spot on the jeans that needed cleaned, and away he went. 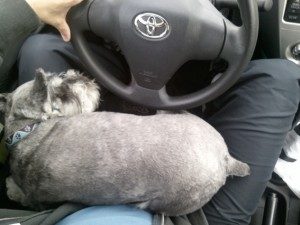 This continued for two more cycles; him licking, spinning, and licking again, until I noticed a discolored dot in area in which he had just been parked. The more I paid attention, the more I realized that every time he stood and spun his 180 to the other direction, he left behind a blotch.

This blotch, then, is what he was discovering and attacking with his tongue.

While I may not be a Sherlock Holmes by any measure of the imagination, I am bright enough to figure out certain things in life. My simple understandings include: never vote for a candidate the Tea Party supports, 2 + 2 = 4, and cause and effect is a reality. I soon comprehended quite easily that every time my doggy-named-Kitty sat, his little starfish was leaving behind a stain, one he would then see (or smell) when standing re-positioning himself. Upon each discovery, he would look at me apologetically—“Oh, hey, let me take care of that for you”—and do his best to remove it as if his tongue were a bottle of Tide.

Once I discovered the pattern, I decided to put an end to the nonsense and opened my glove box.

Like many an American, I keep a handy supply of napkins in there. With one in hand, as the dog licked I lifted him to a standing position. Then, as he stood and took care of a stain, I did my best to prevent another; while his anus was in the air and not rested upon my thigh, I pressed a napkin to his pucker and held it for a few moments. When I pulled it away, aye, it was indeed wet. So I folded it over and on I drove, 70 mph down a Wisconsin highway, one hand on the wheel, one hand pressed against my puppy’s pooper.

It took about four folds for the napkin to come away dry.

They say pet ownership is good practice for parenting, a baby-step in that direction.

No wonder I was a whiz when it came to diapers.