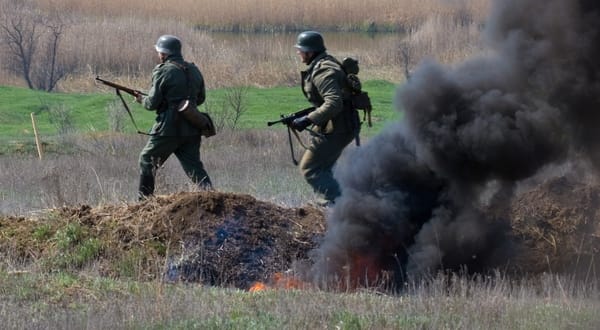 I’ve always been interested in the human side of events. The emotion behind the facts. The pain behind the actions. The fear. The sorrow. The stories.

It’s really just the way I’m wired, I think. In one of my earliest author bios, I wrote that I was “drawn more by the individual tales of terror and bravery in historical war accounts than the strategy that brought opposing forces together.”

I always like the tactical view more than the strategic. The personal. Down in the blood and mud and sand and smoke and fire.

I can read a dozen histories of World War II and not feel a thing. Reading Band of Brothers though sometimes brought me close to tears.

I was working on another blog post that was going to include a reference to a favorite book, and I ended up on a tangent that seemed worth exploring.

100 Best True Stories of World War II, a book I received years and years ago, possibly from my uncle Ross Cahal, himself a World War II veteran, was published in 1945 by Wise and Co. It’s an anthology of stories written over the course of the war, from every theater. There’s a saga about a man left behind on Guam during the Japanese occupation.

More than a few stories have footnotes like “Since this account was written, we’ve received word that Private Smith was killed in action.”

“Account Closed – C.R.K,” by Asa Bordages made a huge impression on me. It’s the story of a Marine who lost in one day 17 of his closest friends in the world. He resolved to kill one Japanese soldier for each of his friends, and Bordages tells the story of that retribution. Clark R. Kaltenbaugh went on to receive two Silver Stars for his bravery during the war.

I remember often wishing I could learn more about the people portrayed in that book. Now we have the internet, so away I went, chasing a story.

I was reading another story, this one about the SS Richard Hovey, when I flipped over to Google to search the name of the ship. Hovey was a Liberty Ship, launched in March of 1943 and named for the American poet. She was sunk by Japanese sub I-26 just over a year after being launched, and therein lies a tale. I-26 not only torpedoed the Hovey and shelled her, but also rammed at least one lifeboat and shot up the other two. “The Saga of the Richard Hovey” tells the tale of the 38 men who spent 17 days trying to paddle back to land.

The survivors were critically short of water and food during their ordeal. One sailor eventually came up with the idea of building a still to convert the salt water to fresh water. His efforts more than quadrupled the amount of fresh water available to the sailors and certainly saved their lives. For his part in the survival of those sailors, Junior Engineer Arthur Dreschsler received the Merchant Marine Distinguished Service Medal.

The account in 100 Best True Stories of World War II, by Ensign James O’Connor mentions that Hovey’s captain, second mate, and two other crewmen were taken prisoner by the sub’s crew and chilling states, “I never saw them again.” The final paragraph reads “But the skipper and the men taken aboard the Jap [sic] submarine had not be seen or heard of. What has happened to them, no one knows to this day.”

O’Connor’s story was written while the war was still going on; the anthology was published in 1945.

I recall thinking that those crew members probably died in a Japanese POW camp, or had been killed by the sub’s crew, if the sub even survived the war.

I-26 was a fairly notorious Japanese sub. She’s credited with sinking the first US merchant ship in the Pacific War (the Cynthia Olson, lost with all hands off California about five minutes after the Pearl Harbor attack began), crippled the USS Saratoga, and sank the Juneau. I-26 is credited with 51,000 tons sunk, making her the third-highest scoring Japanese sub of the war. She was sunk about eight months after she sank the Hovey, during a night attack against the USS Petrof Bay. Read her war record here.

What really struck me about Ensign O’Conner’s account in 100 Best True Stories was his language and the emotion. When he checked the engine room after the torpedo attack, it wasn’t just damaged and flooded, it was “a swimming pool in a black pit of Hell.” The Japanese machine-gunned one of the lifeboats, and after, “that boat looked as if a giant had stabbed it again and again in a wild rage.” The next morning, “Dawn exploded in the sky, a deep blood-red. The sea was tinged with fire.”

A few days later, when Drechsler begins working on his still, “the heat was so great he seemed to melt before our eyes. It must have been like tending a furnace in hell.”

After 16 days in their lifeboat, and the death of one of the injured men, the survivors sight a passing ship. The flare gun is passed forward, and the Bos’n pulls the trigger.

Again, the man pulls the trigger.

There’s so much pain and anguish and total defeat in those six words. These men are 800 miles from the nearest land. They’ve been lost at sea for over two weeks. They’re almost out of food and water, and some are little more than leather-wrapped skeletons. Rescue is within sight, and now their flare gun won’t work.

O’Conner goes on to describe the next few anguishing moments. Finally, a flare fires, with no response from the ship. Then the survivors try signaling with a flashlight.

Eventually, an answer from the SS Samuta: “Stand by. We will pick you up.”

Can you imagine the roller-coaster ride those men went through in just five minutes? We’re saved! A ship! Then the rockets won’t fire. Then one does, but the ship doesn’t answer right away. Finally, the survivors in this lifeboat are rescued.

I only hope I can stir that kind of emotion in my writing.

The account I read in this anthology is only about one of the lifeboats from the Hovey. There’s much more to the story though. Read it here.

What of the Captain?

Remember that Captain Thorsen and three crewmen were captured and taken aboard the sub? What happened to them?

According to The Forgotten Heroes: The Heroic Story of the United States Merchant Marine, the skipper died in captivity. At least one of the other sailors survived the war. The son of Second Mate Robert Turner mentions here that his father survived a Japanese POW camp, but died in 1957 due to health problems associated with his captivity. According to this list at the American Merchant Marine At War site though, all four crewmen survived the war.

If I had more free time, I’d try to learn more about those four men. Those are the rabbit holes I end up losing myself in: following the story. The internet is wonderful for partially satiating a desire to learn more. But even this far into the 21st century, it’s like a cruel mistress, teasing you with just enough information to frustrate you.