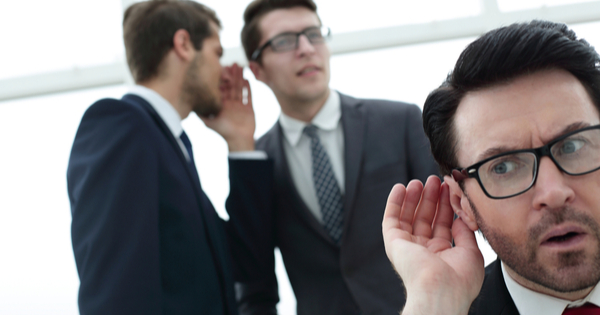 I believe eavesdropping is one of life’s guilty pleasures – akin to sucking down a pint or two of Ben & Jerry’s Peanut Butter Cup at two o’clock in the morning while dialing up the Game Show Network. If you ever marveled at Charles Nelson Reilly’s flowing ascots on the original Match Game (look it up young ones) while iced chocolate sugar seeped over your lips, you know what I’m talking about. And trust me, it’s just as satisfyingly indulgent to plug into the surround sound of conversations in this world that we are not meant to hear.

Now mine is not a novel opinion. Humans have always been fascinated by what others are saying – particularly if the ones who are doing the talking don’t want us to know what they’re talking about. In fact, many a website is dedicated to eavesdropping, such as overheardinnewyork.com, which provides users with a smorgasbord of sentence scraps picked up by creeping ears on the streets and subways, bars and boardrooms, just about any place where the ancient art of conversation is practiced within hearing distance of another human being not involved in the conversation.

Of course, some people are cautious not to be overheard. Members of the Mafia are known to use ambient noise to cover their verbal tracks. They also seemingly have perfected the cupped- hand over-mouth technique when speaking in public, using knuckles as shields against lip-reading law enforcement eager to learn about their criminal activities for arrest and prosecution (your honor, we believe the defendant said he will either ‘cook the books or book the cooks’).

Professional athletes are also prone to such obfuscation. Baseball players, in particular exchanges between pitchers and catchers, is always done behind mitts held over their faces, not only to keep emerging game strategies away from hitters (remember, keep the ball low and away on this guy), but also, perhaps, the zoom-in lenses of television cameras. I often wonder if other things are being spoken between players, such as where to eat out later, certainly understandable given the length of a Major League game.

The cynical side of me also thinks this is for show, an attention grab, drawing more eyes and craning ears to their buttressed banter than if they just shouted out loud and clear: “I’m starving. Let’s say I strike this guy out with a hard slider down and in, and then we get the coach’s credit card and order a pepperoni pizza delivered to the clubhouse.”

But it’s more fun to imagine something intriguing is behind a sentence fragment that drifts into one’s ears. And, for children especially, more beneficial. In an article by Susan Engle, PhD, in Psychology Today, she makes the case citing Paul Harris, a Developmental Psychologist at Harvard. According to Engle, Harris, author of Trusting What You’re Told: How Children Learn From Others,

Uses a wide array of research to show that though children do learn from direct experience, there are many things they can only learn from what others say. In other words, while there is plenty that a child can learn from direct experience, there is also a lot of important information about the world that is invisible to the naked eye, information that must be conveyed through other human beings…Not only do children learn about complex and invisible phenomena through what other people say, they also use overheard conversations to learn how their community views the world, and different ways to think about objects, people and events.

I wish I could justify that my first taste of eavesdropping as a boy was developmentally vital. My real motive, probably, was to spy on my older sister with her first boyfriend. He’d call her on the phone; I’d covertly pick up another receiver and listen in, wait until the right moment, and then shout out some idiotic inanity, willfully blowing my cover. For some sad reason, this was fun for me, but with pleasure came pain, as my sister would invariably tell my parents who would mete out the correct scolding for such (you name it) behavior.

And that’s the rub: most short-term gratifications in life, i.e. sugar, gossip, bad TV, come with long-term detriments. I mean, we love the Cool Whip now, but hate the angioplasty later. And we’d prefer that a criminal gets locked up before they do more damage to innocent people, but we abhor the invasion of privacy needed to sniff them out.

So I’ll continue to listen in and be listened to, and won’t complain either way. My only hope is that the conversations I overhear will be as fascinating as what I’m giving out. And considering my interests revolve around Charles Nelson Reilly’s ascots and ice cream, it shouldn’t be a problem.