—
Both of my parents passed away at a relatively young age: my mother at 71 and my father at 75. They have been gone now for over 10 years, but I think of them often and the lessons that they taught me when they were alive and how they have influenced me over the course of my life.
In many ways, I grew up in a “traditional” world, where the father provided for the material needs of the family and the mother provided for the emotional needs of the family. That model is not currently in vogue today, but it’s the model I knew and the model that I took into early adulthood.

Although my father’s sense of manhood is often disparaged today, I have seen how by adapting it to the needs of today, that I was able to become a much better man and father.
When I think of my father, the word that comes to mind is DUTY. My father was a dutiful man who took care of his family. He was not vocal about it, nor did he need or receive recognition for it. He knew what he needed to do as a father and he did it without much fanfare.
In my youth, our family was living in Providence, RI. As with most city dwellers at the time, my parents wanted to move away to someplace quieter. My parents looked at homes to buy, but never saw anything that they liked. Instead, they decided to buy land and build their own home. And when I mean build our own home, I mean my father, who was very handy and mechanically inclined, would build our own home! 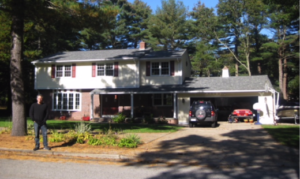 So for the next 4 years, my father and I, with help from my mother and sisters, went each weekend to build our new home. For the most part, my father and I built the house.
Think of that, working 5 days a week at his job, and then on the weekends building our new home. He and I worked side-by-side for those 4 years. During that time, I learned the simple concepts of doing a good job, using the right tool for the right job, and service and DUTY to family. I never heard my father complain.

Years later when my mother became ill, my father took over doing what we would call “woman’s work.” He cleaned the house, did the laundry, shopped and cooked. He drove my mother to the doctor’s office and took care of her. When she passed away after a long illness, one of my uncle’s said to his wife, “I don’t know if I could take care of you as well as Tony took care of Nancy.” And for the first time in my life, I saw my father cry. And he still did not complain!

When I became a father, I adopted my father’s sense of DUTY to my own family. I served them and wanted to provide for their material needs. But an interesting thing happened. As I was providing for my family’s material needs, I found that I was also providing for their emotional needs. I began to see that those two needs were connected. I became more aware of my need, and my DUTY, to see to all of my children’s needs – material and emotional.

Today, my three adult children, two daughters, and one son are very well adjusted and successful. We are close to this day. I have become a man who has become more empathetic and emotionally aware by adopting my father’s sense of DUTY to his family and adapting what he taught me to see to all the needs of my family.

Before we are so quick to throw away all the lessons of our fathers and grandfathers, we should remember that their sense of duty to their families is as important today as it was then. By honoring that sense of duty, men will learn and become the empathetic figures that their children need today.

I'm an over 50 divorced man, father of 3 wonderful adult children, just trying to find love and happiness, doing his best to make the world a better place, enjoying some really good bourbon and engaging with new people and new ideas in hopes that others may benefit.