A long-standing Red Sox Yankees rivalry will do that to you.

There are lots of ways in which kids rebel against their parents, some more harmful and consequential than others. Some kids refuse to do chores, refuse to eat certain foods, sneak outside when they’re grounded, or reject their parents’ political leanings for the sake of it. When I was nine years old, I did something to my dad that I, quite frankly, am shocked he ever recovered from. When I was nine years old, just beginning to develop an interest in baseball, I became a fan of the New York Yankees.

I knew perfectly well what this would do to him. My dad grew up in New Haven, Connecticut, idolizing Carl Yaztremski and listening to Red Sox games every day on his ice-cream route. The day his pre-adolescent son joined the dark side would be forever lodged in his memory alongside the 1975 and 1986 World Series and Bucky Dent. My transgression was equivalent to the son of devout Catholics telling his parents he didn’t believe in God.

It was rough the first few years. The 1998 World Series was difficult for my dad to watch. He wanted to see his son happy, sure, but not like this. He bought me a Yankees hat for my birthday that year as an olive branch of sorts, and to this day I’ve never seen a parent so dismayed at their child’s enjoyment of a gift.

That offseason, the Yankees acquired Roger Clemens from the Toronto Blue Jays in a trade, adding insult to injury for my dad as he was forced to see one of the most beloved and storied pitchers in Red Sox history wearing the hated pinstripes. The narrative is supposed to be that baseball is America’s national pastime, a way to unite generations, not divide them. My dad and I root for the same teams in every other sport. Why I picked this one as the sport in which to play the contrarian card, I don’t know. But I did.

This continued for another few years—my Yankees winning three titles in a row while my dad’s cursed Red Sox fell apart again and again—but he got his revenge, of course, in 2004. As if it weren’t enough that the Red Sox overcame a three-games-to-none deficit to the Yankees in the American League Championship series, my brother had picked that particular year to switch sides in the rivalry. His reasoning had something to do with the absurdity and excess of the Yankees swooping in to trade for Alex Rodriguez mere days after a deal the Red Sox had in place for the superstar shortstop fell apart. The Yankees already had a shortstop, some guy called Derek Jeter. They took on the $250 million contract of another shortstop and moved him to third base. This didn’t sit well with my brother, which confused me because, you know, why would a team ever want to acquire the best hitter in the league if they had the resources?

My feelings about my brother’s switch were absurdly conflicted: I had resented him doing everything I did (“Stop copying me!” was a common phrase at the time), so I should have been relieved for him to do to me what I had done to my dad. But 14-year-olds don’t think like that. That would require being rational and reasonable, which is for the most part completely out of the question at that age. When he flipped, I knew what it was like to be in my dad’s position, and I didn’t like it. To add insult to injury, the Red Sox went on to sweep the St. Louis Cardinals and win their first World Series title in 86 years, thereby invalidating “1918,” my go-to retort for just about anything.

The rivalry was never really the same after that. Somehow, giving each other shit for our respective teams’ superstars being named in the Mitchell Report as steroid users doesn’t have the same emotional heft as my holding an eight-and-a-half-decade curse over his head. He was all too happy to remind me of the revelations about A-Rod, and took every opportunity to do so, right up until Manny Ramirez and David Ortiz were also implicated, at which point it became my turn.

It also didn’t help matters that the Red Sox’ payroll was now nearly as high as that of the Yankees, when it had been my understanding that the whole reason every self-respecting baseball fan hated the Yankees was George Steinbrenner’s unmatched willingness to open his checkbook at every opportunity.

The Red Sox are coming off a winter in which they traded for San Diego first baseman Adrian Gonzalez and signed him to a seven-year, $154 million contract extension, and also poached outfielder Carl Crawford from the division-rival Tampa Bay Rays for a similarly Steinbrennerian salary. These acquisitions have carried comparisons to, of all things, the 1927 Yankees. The Red Sox look pretty unstoppable at this point in the season, but at the start of the 2011 season, they were a trainwreck. But I couldn’t enjoy their 2-10 start because it was a frustration I knew all too well. A fan of one team with a bloated payroll and no winning to match ribbing another for the same leaves a lot to be desired on both ends.

The breaking of the Red Sox’ curse in 2004 did, however, make my betrayal of several years ago easier for my dad to come to terms with. In the summer of 2006, my family took a trip to Yosemite, which is where one of our more enduring running jokes was born. My dad and I would, of course, be wearing hats for our respective teams while out hiking, and the sight of a Yankees fan and a Red Sox fan seemingly on speaking terms with each other made plenty of fellow hikers stop and ask variations on the same question: “How do you guys live together?” We would respond: “We’re firm believers in world peace.”

Something about that phrase just stuck. Whenever we went on vacation anywhere after that, taking the “world peace photo” was a staple. And if someday my son decides to turn on me and become a Red Sox fan, it’s cool. I’m a firm believer in world peace.

Sean is co-founder and associate editor of the popular indie music webzine One Thirty BPM and a columnist for Hardwood Paroxysm, an affiliate of ESPN's TrueHoop network. You can find him on Twitter @seanhighkin

Sean, you instinctively, even at such a tender age, made the right decision.

I’d rather my son be a serial killer than do what you did to your poor father. Have you no shame? No soul?? 😉

I live around the corner from Fenway. Just gearing up for tonight’s show-down and not sure I can forgive you myself…but then I too believe in world peace.

Welcome aboard the GMP bandwagon! 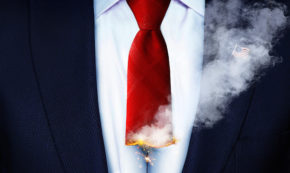