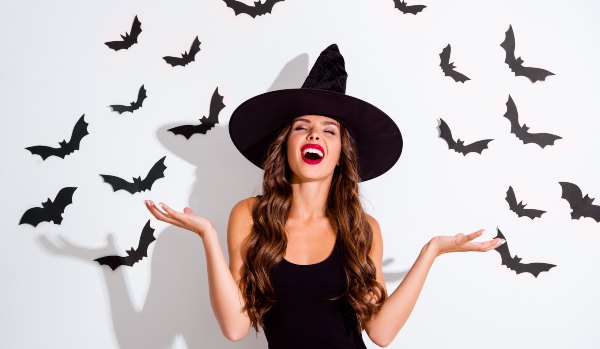 All Samantha from Bewitched has to do to charm a man is wiggle her cute little nose, and it’s all over.

Have you tried that? Wiggling your nose and hoping for the best when you see someone cute?

Unless you’re a real witch, it seems like the return rate on such an endeavor would be pretty slim. The person you’re trying to charm very likely is assuming that you’ve got some kind of nose itch situation going on, after all.

So, lacking a spell, how does one charm a potential partner?

In everyone else’s experience? Statistically, not too much better. University of Kansas researchers determined that only 36% of men and 18% of women could guess whether or not they were being flirted with.

Casting a magic spell may be just about as effective as laying on your charm.

What makes up a spell?

The right words, the right gestures, maybe a candle or a special floral reagents?

Alright. So what makes up flirting? The right words, the right gestures, and if you’re lucky maybe some candles and flowers, right?

Singing I Put a Spell on You like the Sandserson Sisters isn’t working out for you romantically. We know from Practical Magic that love spells are a big no-no. So what are the alternatives?

In large part, the alternative is having the object of your affection have absolutely no idea what you want from them. Statistically, the person you have a crush on is a lovely idiot who has no clue that you’re flirting with them.

I’ve been that lovely idiot on more than one occasion.

In high school, flirting is even more esoteric. If you think you’re bad at flirting now, rewind with me to who you were in high school. Occupy my shoes for a moment. Do a full on possession to get my point of view, if it helps.

If a girl you knew called you after school and said, “Hey, I work part time at a kangaroo farm outside of town. Would you want to come see that?”

Do you detect her witchcraft? Do you see through her bubbling cauldron of romantic intent?

Or do you say, “Holy shit, a kangaroo? I’m putting on my shoes right now, come pick me up.”

I said the latter. Can you blame me? We all know a witch needs a familiar, and I didn’t expect an entire kangaroo to be hers.

The girl from school might have invited me on a date, but the kangaroo was in charge from the beginning. It helped that I didn’t know it was a date. Or that she was even interested in me!

My grumpy father had to be the one to tell me I was being hit on, but even that was only after she brought me flowers.

Yes, even the flowers were not a clue to me.

So neither witchcraft nor more textbook style flirting is going your way. The person you’re after is as dense as I am, and totally immune to Love Potion Number 9.

Are you entirely out of options?

Is flirting (and magic) totally a lost cause?

Well, you could always try abandoning the song and dance aspect and just saying how you feel. You know, a real honest bit of eye contact and genuine emotion where you say, “I am romantically interested in you.”

Just typing that out gave me goosebumps. Way too scary!

Most people would rather try their luck consulting with their coven of close friends, ensuring that each text you send is just flirty enough. (This isn’t just a girl thing, either! I have even heard of men consulting with their own coven on whether or not their dick pick is worth sending!)

But if you’re brave enough to be flirting in the first place, is it not worth a little bit of boldness to avoid the drama of it all?

True, trying to cast spells and predict the future is exciting! But as The Craft all taught us, too much magical excitement will have consequences.

In the case of flirting, that consequence can be anything from the awkwardness of misinterpreting signals 67% of the time to never making a real move out of fear of rejection. True, it’s no “going mad with power,” but it’s still best to be avoided.

So maybe instead of flinging spells with our magic wands, we could try speaking plain English to the people we’re interested in.

Emotional vulnerability is scarier than any of the witchy movies I’ve referenced so far.

But hey, flirting is terrifying too! And being alone forever because you’re afraid to speak plainly? That doesn’t sound too fun either.

So be clear! Be honest! Stop wiggling your nose so much, it’s starting to get weird!

Cast your spells, if you must, but remember that there’s an easier way to getting what you want.

Goofball, anti-fascist, stay at home jester. I use they/them pronouns and know useless information about everything.