Get Daily Email
Join/Login CLOSE
Home / Featured Content / For My Son, for His Future 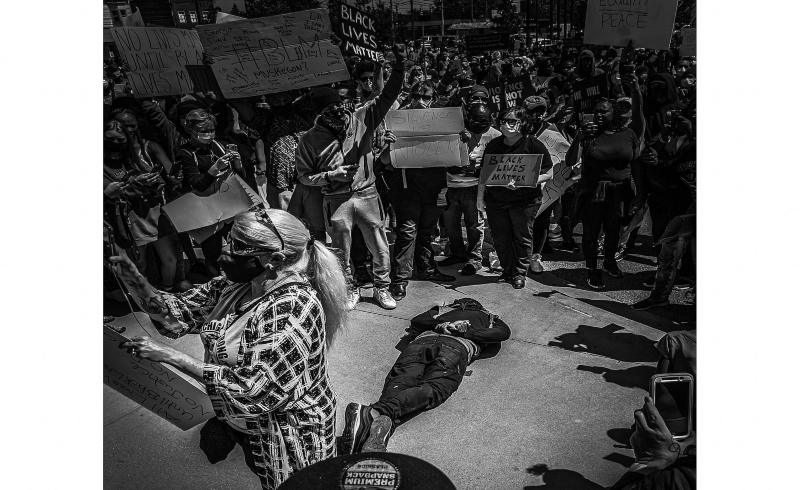 Over the past week, I had the opportunity to help organize and attend a protest in my city. It was indeed a fantastic feeling, but that feeling is not what I will be highlighting here.

The week leading up to the protest included the news of the murder of George Floyd. Police brutality, racism, and murder were responsible for sparking the protest that I helped organize. I spent four days of that week living off of adrenaline and pure anger. I could not concentrate on anything other than what had happened to George Floyd. The video and pictures of that murder will be forever seared into my memory. Not only was it horrific, but it ignited a flame inside of me that I do not think will ever go out.

I could not stop seeing my son’s face in this entire situation. Any time I heard or saw the news (which was often), that’s all I could see. It consistently tore at my heartstrings. My abdominal muscles were consistently flexed throughout the week. I could feel the hot shooting adrenaline settle right in the back of my head right under my ears. I frequently could feel the heat of anger behind my eyes. I often caught myself holding my breath as I tried to take in every emotion that this situation offered me. My body was trying to process this, and it could not.

In a genuine “tough guy” form, I must let you know that I am not a crier. If I cry, it is once or twice a year. That is a skill I developed over the years due to my trauma and my own experiences.

However, the skill of remaining detached emotionally left the minute I saw a picture of George Floyd being held down by that police officer.

I cried so many times within the week that I was mad at myself.

I cried tears of scorched anger and unabashed sadness.

I can already feel the lump in my throat, and the warm tears are pooling around my eyelids as I write this.

It was a constant switch between tears and sharp, searing anger. I couldn’t stop it. The steady stream of obscenities in my head and the deep yearning to feel and see justice, and the righteous fury that arose within that wanted to see that cop’s life taken on live television, was the fuel that kept my adrenaline on ten all week. I was holed up in my mind and I lived there unpeacefully for days. My kids and my wife suffered due to my lack of attention towards them.

My fuse was short. My words were shorter.

I could not stop thinking of how I would react to this situation if this were my son. The thoughts were pervasive and cyclical. They haunted me from the time I woke up to the time I laid down to try to sleep. They were my best friend and worst enemy all at the same time. I could feel the birth pangs of change rising from the soles of my feet to my clenched fists and up to my tired and weary mind.

I knew that it was time. I knew that I had to do something. I knew that all of my Facebook posts, Medium articles, and verbal discussions meant nothing. I knew my anger was justified, but I knew I had to channel that anger into action. I knew that my family, friends, and community were watching. Everyone had already seen my posts bathed in rage and righteous indignation. Now they were waiting to see if I was going to do anything.

Throughout this buildup of emotional and physical distress, I found the opportunity to go to Grand Rapids, MI, and protest. I knew that I was 100% going before I even checked in with anyone else. There was no option. I told my wife that I had to go. She knows that once I get something in my mind, I am going to do it regardless of whether or not it is a bad idea. She lovingly told me that she would watch all 5 of our children so that I could attend.

So I went, and I fell in love. I felt at home. I saw other people from all different backgrounds there standing up in solidarity against things that will directly affect my son as he continues to grow older.

I felt my soul attach to purpose at that moment. The necessity for activism was birthed immediately and deep within my being. It helped me feel alive. It helped me understand that, at all costs, I must find a way to radically stand against racism and to staunchly let everyone know that Black lives will forever matter more than white feelings.

I HAVE TO DO THIS.

I am brand new to activism, but I promise I will figure out, no matter how many mistakes I make or how awkward and clunky it may be, how to make a change in my community. I will figure out a way to get white people to be militant about changing the System.

I must do this.

Activism is what I feel called to do. I am just now learning to crawl concerning all of this. Still, I am working towards becoming an Olympic sprinter so that I can carry the torch of change that will potentially let my son someday feel equality within this country and his community.

So Zae, as daddy is writing this with tears in his eyes and with breath quivering, just know this:

I am finding the line between realistic expectations and white saviorism, but in the meantime, I am going to fight like hell to try to move forward at any cost. I refuse to wait, and I love you too much to never put my entire being into finding a way to change this world for you.