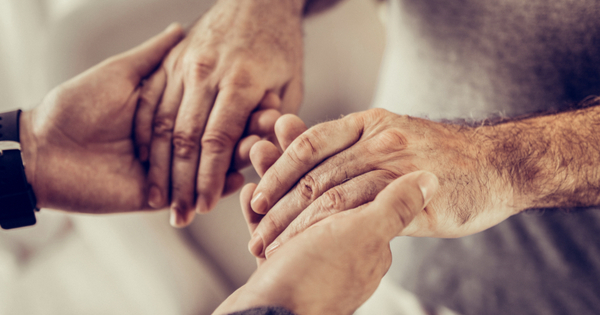 The door on my parent’s bedroom makes a squeak as I pull. No light spills into their bedroom, I made sure everything was turned off tonight when I got home. I’m a little miffed that the door squeaks so loudly. I installed it myself, with my dad’s help. The paint job on it needs work as well. My father calls it a learning experience. For a seventeen-year-old kid though, I think I did a pretty fine job.

“Well… we won,” I say, barely louder than my mother’s snores. I wasn’t worried that I would wake my father up. He’s always up on Friday nights, waiting for me to come home from the football game.

I sit in his wheelchair parked by the bed. Most days, my mom will put the chair in the corner at bedtime. But on Friday nights, she leaves it by my father’s side. It’s a clunky thing and the footrests seem to stick out too far as evidenced by the black scuff marks on the walls all over the house, exactly fourteen inches off the ground. His fine motor control is getting dodgy, and delicate movements are getting harder.

I sink into the custom-made cushion, letting all two-hundred-pounds of me finally relax. The air rushes out of the cushion and me. My arms are bruised and my hands hurt. The knuckles get caught between helmets, stepped on, and just the effort of trying to hold on to an All-American running back takes a lot of effort. We played that kid tonight, and I’m a bit proud that I was able to pull off some solo tackles.

“Tell me what happened?” my dad says. He starts this conversation the same way every time. The open-ended question lets me just tell the story, and my dad loves a good story.

“Some fat guy drove me into the ground like he was planting me for spring,” I begin. And then I take him through every moment of the game. I do my absolute best to paint a picture so vivid that hopefully, he can see his self there, in the stands, watching his son play.

I tell him of the grass, freshly mowed, but wet from early evening dew. Every time I would touch it, how my swollen fingers would sink into the soil. The smell of fried food and athletic tape. The crowd roaring. I explain to my father that it’s the weirdest thing, that I know that there are four thousand people in the stands but most times I can’t hear them. I can only hear the opposing quarterback, screaming signals in a militaristic way, full of bark and surety, but no crowd. And for a while, during this hour-long conversation in the middle of a Friday night, we are like every other family We pretend that getting into the stadium is a possibility because ramps are in place or he can actually walk.

“There was a Goliath lined up against me tonight,” I tell him. “Big enough that there is no way he isn’t juicing. He stunk like a dead armadillo.” My dad tries to sit up and fails. He laughs, it’s wheezy and soon he beings to cough. I smile in-between my whispered story, an involuntary reaction to his laughter. I love making my dad laugh. It’s my thing, the way that I connect with him. The harder the coughing fit I give him, the happier we both are. My mom stops snoring for a moment, and dad regains control of himself.

I go deeper into the game, discussing with him things that I know he has no clue about. I go so far into technical football jargon that a normal person would already be asleep. Dad’s not normal, he’s wide awake and living every memory with me. I explain the complete game strategy to him. He notices that I’m rubbing my arm, a large bruise he can’t see covers part of my tricep.

“Strategy sometimes hurts though, don’t it?” he says, and it is my turn to laugh.

I get animated as I talk about the game; stand up from the wheelchair. My arms flail about as we go over how to break a hold from cheating fat bastard linemen. His water bottle, the one we got from his last stint in the hospital, gets knocked over in my desire to show him the “rip” maneuver. The water bottle is as big as those linemen, only smarter. The top pops off, and the water rushes over the sides of his end table.

“Shit,” I say, an involuntary curse that normally I wouldn’t think about saying in front of my father. But what I’m thinking about now is the cable to the side of the table that is used to charge the wheelchair. If that sparks, we don’t have wheels. I quickly move the cable away with my foot.

“Don’t worry about it, keep going,” he says. He doesn’t worry about the small things, he is the master of letting it go. In all the time my father has had Multiple Sclerosis, I’ve never heard him complain about it. It’s not in his nature.

I suppose that for a man that left home when he was fourteen, fought in a war by the time he was eighteen, complaining about this seems almost trivial. At least, that is the way he plays it off. He’s been in a wheelchair since I was ten, which was the last time he saw me play any sport. But we don’t complain about it, we have our Friday night talks instead.

More carefully this time, I resume my story. My anger starts to show a bit, I can’t control my emotions as well as my father. The blatant holding hadn’t been called all night, and as I relived it, that same emotion came back. Several times I slam my fists down on the armrests of my father’s wheelchair. I’m not worried about breaking the armrests, they are the toughest part of this entire setup. They are covered in duct tape where the fabric has ripped but as my dad says “they are serviceable.” Sometimes it feels like our entire world is just serviceable.

I get to the climax of my story, at least the way I had it pictured in my head. I want him to really see this, to be right there on the defensive line with me. I tell him how it’s fourth and four and there is no doubt that they are coming at me. I’m the runt on the field, two inches short of six feet when I lie to myself. There is no doubt the ball is coming my way.

I pause, drawing out the tension.

“Well?” he says as he shifts himself up into a better sitting position. He grabs the metal trapeze above the bed to help him. I can smell the ointment we put on to prevent bedsores as the metal clanging of the trapeze gives a chorus to the story.

“And…” he says, and I can almost hear his smile. There is glee in his voice.

“I get leverage and dig underneath the guy’s pads. I’m knocked back, someone steps on me, I throw my legs into the air.”

“Jesus Shannon, but what?!”

“The running back tried to run right over me and got tangled in my legs. He goes down, everyone piles on.”

“You tripped him?” he asks.

He starts really laughing as he holds onto the trapeze. It sounds like a wind chime is going off in a hurricane. If he breaks it, I’m going to have to repair that in the morning.

“Preston? Are you ok?” my mom asks. I’ve accidentally woken her up. There is concern in her voice, but also familiarity with the phrase as she asks it several times a day. Every day. For eight years. My mom is pretty awesome.

“I’m fine, Linda,” he says, catching his breath, coughing out the words. “Shannon is just telling me about the game.”

“Did he tell you about the end?” she asks, letting me know that she didn’t spoil my story; my time with dad.

With my story finished, and the fatigue really setting in, I get up from the wheelchair and hug my dad. His hug is hard, and he tells me that he’s proud. I’ll be in the same place next week, telling him a different story. I enjoy telling my father about the games more than the games themselves.

Football season eventually ends. I graduate, go to college, start a life outside of my father and family. But I keep coming back to that room over the years. To that chair. To tell my dad the stories of the places I’ve been where he couldn’t join me.

I’m a father myself now. My two sons break just about everything we own and when they do I tell them not to worry too much, we can fix it together. I try to be as good of a father as I had. I read a lot, pouring over blog posts or articles about modern fatherhood. I watch interviews with celebrities that talk about their experience. I get angry over the stories that show fathers like a bumbling Homer Simpson, and my wife needs to calm me down.

All of us, at least most of the dads that I know, look for the stories that show us how to be a good dad. We watch the speeches, go to conferences, sometimes even take classes. There is an enormous responsibility on our shoulders, and we want to do this right; to truly be the “modern father.”

We need to tune everything out and journey back in our own memories to those men who defined the term “involved father” before it was even a thing. There, twenty-five years gone and shrouded in the darkness of a Friday night, we can learn everything we need to know about being a dad. In those memories, we can find the men that were involved, even when they couldn’t be.

Father’s Day is about appreciating and giving thanks to those men that made us who we are. The gift that they gave was something that we couldn’t see until we had kids of our own years later. And it’s to those fathers that we owe our gratitude.

Facebook26Tweet4Pin1EmailShares31
wpDiscuz
Share this ArticleLike this article? Email it to a friend!
Email sent!