Get Daily Email
Join/Login CLOSE
Home / Featured Content / Has Fatherhood Made Me Dumb? 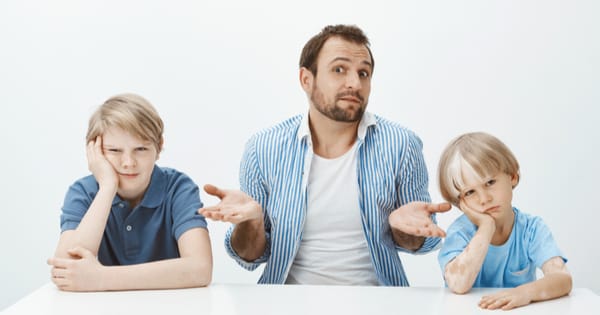 “Dad, did you know what Hawking radiation is?” my twelve-year-old son asks.  There is a smirk on his face.  His eyes sparkle with malice.  Outside, the song from The Good, The Bad, and The Ugly can be heard.  Odd how that worked out.

He likes to try and stump dad.  It’s his game as he gets older.  It’s a constant quiz show with children and the older they get, the harder the rounds become.  Soon, we will be in bonus territory.

“Ok, tell me,” he says but not in an inquisitive way.  He’s not asking to be educated.  He is not after knowledge.  He says it in the same way that one would tell a lobster to get into a pot of boiling water.  Go ahead and jump in, it’s just water.

“What kind of radiation?”

He has called my bluff.  I shift in my dad chair.  I adjust my dad sweater.

One of the unexpected consequences of becoming a father, besides the lack of money, is that I have become dumber.  I don’t know exactly how it happened, but it happened.  Straight out of college, I knew everything.  Ask my own father; he would agree.  I was never tested, but I’m pretty sure my IQ would have been Einstein-level.  Not quite as high as his, but high enough that we could enjoy a nice brunch together and he wouldn’t feel stupid.

A year after college, you would want me on your trivia team.  I was the guy that could answer pop culture questions, philosophize on historical events and do equations in my head.  People would often walk by me and just touch me to be close to that level of knowledge.

I did read Stephen Hawking’s book A Brief History of Time.  I’m proud to say that I understood a solid 10% of it.  In short, I was the man.

Then I had kids and everything just fell out of my head.

Simple things at first, like maybe I should remember to zip up my pants.  It seemed so unimportant once a new life was thrust into my hands.  Zipped pants are for people that only think about themselves.

I’m a giver.  There are bigger issues to understand now, like how the hell does a baby wrap work and where is the buttpaste?  I once forgot what the word blue meant.

“Well, you see son, back in the time before dinosaurs…” I begin my answer.  He looks away as if not wanting to witness the car wreck he sees coming.  He knows that it’s going to be brutal.  He knows that I’m stalling.

“And then, the dinosaurs did come and had many adventures.  In fact, it has been well documented that a Brontosaurus named Little Foot…”

“There never was brontosaurus, dad.  That was a mistake.”

He didn’t catch my Little Foot reference, which is good for me.  See, this is what my true knowledge has been replaced with.  I can name every character in the Land Before Time cartoon series.  I can name all the dogs on Paw Patrol.  I know Phineas and Ferb and Candace.  I can sing the song from Dinosaur train.  I know that Thomas the Train is a whiney little jerk whose toys cost way too much

It’s a wooden toy train!  Why is it thirty bucks!  Fatherhood has made me dumb.

“Yes, yes, that is a common argument but there still is a lot of debate.”  There is no debate.  I forgot that one.  “After the adventures of the Dinosaurs and a plucky brontosaurus, an astroid came.”  The truth of it is, I haven’t lost all of my worldwide knowledge.  It has been stolen.

For thirteen years my children have been asking me questions.  Even when they were younger, the questions were tough because the kids didn’t know how to frame it another way.  Truly answer the question “Why is the sky blue and the grass green.”  That’s getting into two different sciences, weather patterns, average rainfall, and the chemical make up of the atmosphere.  That’s where all my knowledge went.  All my years of hard work is in them.

Then the questions got more complicated and abstract.

Where do babies come from?  What is love?  What happens when you die?  I mean, holy hell, at times I was barely keeping up.

And over time, my brain leached everything I knew into them.  This left a power vacuum that was quickly filled by whatever facts presented themselves.

Dora’s backpack is named backpack.  Patrick is somehow a Starfish.  Blue’s Clue’s are marked by a paw print.  That’s what is in my head now.

“We’re studying this in sixth grade,” my son said.  He wanted to take the time to remind me that I didn’t know what sixth-graders know.

“Fine.  Hawking Radiation is black-body radiation that is predicted to be released by black holes, due to the quantum effects near the black hole event horizon.  It was named after Mr. Hawking, who provided the theoretical argument for its existence in 1974.”  Boom.  Mike drop.

He turns as he tries to figure out what just happened.  He wanted to pull one on the old man, but the old man is cagey.  I’ve got skills.  Of that 10% of A Brief History of Time that I understood, that was one thing that really stuck, not taken away by a children’s cartoon or a carpooling schedule.  It was just waiting for this moment.

As he leaves, I close the browser that was open to the search term Hawkins radiation.  Fatherhood has given me a different knowledge set, one of the most important is stalling, over-confidence, and sleight of hand.

But I really can name every single Disney Princess, if you all just look away for a quick second.