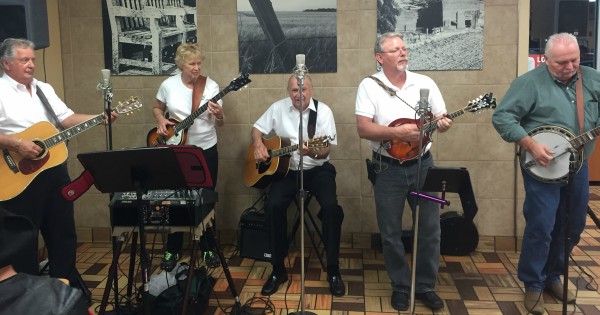 The McDonald’s was filled with Southerners. I tapped my foot to the sound of banjos and an elderly woman shuffled out onto the floor to square-dance. Her shoulders bobbed. She sidestepped and twirled. Others joined her, some clicking their tap shoes alone, others partnering off.

I was driving across the country on a 1982 Honda Nighthawk motorcycle. Having checked in at a hotel next door after a sixty-mile ride along the Blue Ridge Parkway in Virginia, I’d come to the McDonald’s looking for a quick meal. I thought I might’ve stumbled onto an American Legion meeting until I noticed musicians unpacking instruments near the back of the restaurant.

“Is there a performance tonight?” I asked the cashier.

“Bluegrass band,” he yelled over the chatter.

He said the Cranford Creek Bluegrass Band traveled to bluegrass festivals around North Carolina and southern Virginia. Every Monday night, they played for the local community at the McDonald’s in Pilot Mountain, North Carolina. I had planned on eating dinner in my room while watching the nightly news, but I couldn’t miss a hoedown at Mickey D’s.

The fast-food restaurant was flooded with about fifty people, mostly elderly, wearing blue jeans, overalls, flannel shirts, and leather cut-off vests. They greeted friends at tables, shook hands, and exchanged stories. I heard a “hot diggity!” from the corner of the room.

A man in his forties, wearing a handlebar mustache and a leather vest, pulled a pair of white tap shoes from his bag and slid into the middle of the floor to improvise a tap number to “Your Cheatin’ Heart” by Hank Williams.

When the song ended, the lead singer addressed the crowd through the microphone. “Just a reminder, y’all: this Saturday, we’ll be at the country store—just playin’ country.”

The music paused, and the lead singer visited tables. Patricia Gravitte, in her sixties, had short blonde hair and was wearing a white shirt, black pants, and dark Nikes with light green laces. With a southern drawl in her voice, she told me, “Every Monday, people come from all over, about a sixty-mile radius.”

She nodded then balled up a fist. “I used to play banjo until the arthritis in my fingers got so bad that I couldn’t hold the instrument anymore.”

She asked what had brought me to Pilot Mountain. I told her I was on a cross-country trip. I was searching for solitude but thought the community event was refreshing. Pat could tell that I was on the sidelines for the hoedown, a dispassionate observer with no intention of joining the fun.

“How did you guys end up playing here?” I asked.

“Years ago, I asked the McDonald’s manager if we could play for the community. I told him we wouldn’t disturb customers or hold up any lines. He said, ‘Don’t worry about it. You play all ya want.’”

Pat leaned in close and whispered, “There’s another guy who plays in restaurants around here, but he’s nothin’ but a joke. Doesn’t play well, and he eats enough for two people.” Pat laughed, then said goodbye and visited other tables.

I walked in front of the band and snapped a picture with my phone. As I turned away, I heard the guitarist say, “That boy needs to learn how to flow.”

I resumed my dinner, knowing what he meant: To participate. To join something, anything, to share values with a community, if only for a night.

I wondered if I would learn how to flow.

A woman in her sixties swung open the front door and hobbled into the restaurant with a cane. She said hello to friends, then came back to my table. “You married?”

I grinned with surprise and shook my head.

She lifted her cane. “Well, why not?”

“What do they put in sodas here?” I asked sarcastically.

She stretched out her hand, inviting me to dance.

“Maybe another time,” I said, waving my hand.

She smiled as she shuffled off. “I’m gonna hold you to that.”

I’ve always resisted wearing a company badge in the workplace, buying a sports team’s jersey, or saying namaste after a yoga session, but even a free spirit can value a community of folks who seem to dance as if no one is watching.