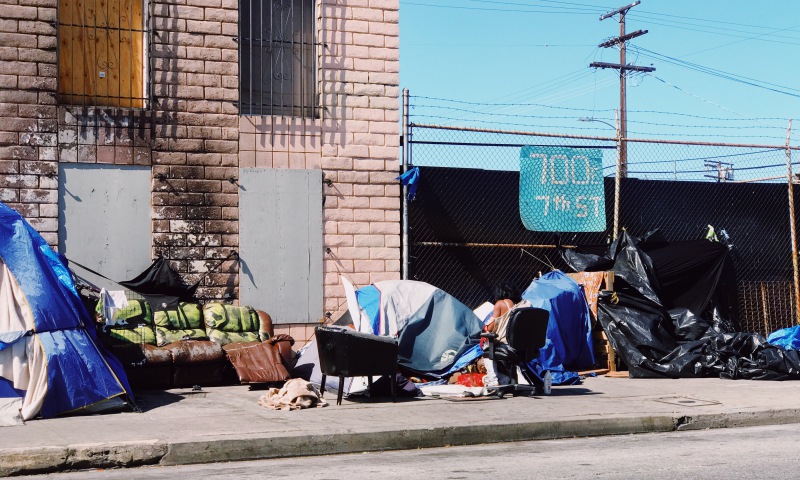 We were homeless. My wife and I, 8 kids, and two dogs.

We had been evicted from the home we were renting because we lost our primary income and could no longer afford it. Even so, we were doing everything we could to make the payments. But then the landlord raised the rent by 30% (the justification was that it was the “market rate” for the size of the house) — knowing that we couldn’t afford it, but had nowhere else to go. When we tried to re-negotiate the rent, they didn’t even respond.

(The State of Washington is one of many that still does not have any rent control laws protecting tenants from inordinate rent hikes.)

So then, because we had an eviction on our record, most rental agencies wouldn’t even look twice at our application. (Though they would happily collect the application fee to tell us “No.”) Our only hope was to find a private landlord that would be willing to overlook our record. Easier said than done, since the vast majority of landlords use an agency. Even if we found one, it was a tough sell with a family our size.

Months went by as we bounced between motels, stayed with friends, and when the money and goodwill was exhausted, resorted to camping out. But then Fall weather started setting in, turning wetter and colder every day. We were in a dire situation, with young kids and teenagers in-tow, we needed to get them back into their studies, but all we could do was focus on where we were going to stay, what we were going to eat and how we were going to prepare it.

At first we reached out to our church for help and they were able to help cover a week in a motel, then referred us to agencies where we could get more help. Problem was, they weren’t able to help much either. Mostly, they just took our information and said they would let us know. Weeks went by. Then months. It was two months before we heard anything, but that just gave us false hope.

We quickly discovered that they were short-staffed, case managers were overloaded, and waiting lists were months — if not years — long. Meanwhile, we often didn’t know where we were going to be from one week to the next. Sure, our case manager would call us occasionally to ask us how the housing search was going… “Is there anything we can do in the meantime?”

“I don’t know… Is there anything you can do?”

The cold, hard reality was setting in. We were on our own.

We made it through, largely due to the kindness of friends and family. As much as it seemed like everything was going “wrong,” there was still a lot that went “right” for us. Some dear friends gave us tents and camping gear. Others set us up at a private camping resort where we were able to stay for weeks at a time and pretend (kind of) that we were on an extended summer vacation… until worsening weather caused that illusion to fade.

Finally, in November a house opened up through Interfaith Coalition, a faith-based organization that welcomed our family with open arms, allowing us to get out of the cold and start transitioning out of Survival Mode and back into a semi-normal life.

Though we are safely sheltered now, every time the weather turns, and the temperature drops, I think of those families and individuals who are out there, with no place to go. Maybe in their car, or in a tent, or just huddled under a tarp. My heart reaches out to them, willing them to stay warm, and not lose hope.

But it’s not our place to make those kinds of judgements.

Do you know what Jesus did when he was pressured by his peers to make a judgement like that? He said, “Let the one who has never screwed up cast the first stone.” — John 8:7 (my paraphrase)

We’ve all made mistakes, and are likely to do so again at some point. So it behooves us to treat others the way we would like to be treated — with compassion, not judgement.

If you come across someone barely hanging on to the side of a cliff, desperately trying to claw their way back to safety, do you stop and say,

“Wow, how’d you get into that predicament?”

No! (I should hope not, anyway.) You first reach out and help them up. Then, if they need it and are open to it, you can offer some wisdom on how to avoid falling off the cliff again.

That’s what these people need — compassion — and that’s how we all should respond. Not out of religious or moral obligation, but simply out of our own humanity. It’s NOT a saintly or heroic deed to help someone out of a ditch. It’s what we all should do — no matter what our beliefs or religious persuasion.

This is how we all contribute to make the world a better place. No judgement, no obligation, no expectations. And if it happens again, help them out again. And again… And again…

Jesus’ disciples thought they were being generous when they asked him how many times they should forgive someone for committing the same offense. “Seven?” they asked. “No.” He replied. “Seventy times that.” — Matt. 18:21–22 (my paraphrase)

This is not a sacred spiritual teaching; it’s a practical, universal one. Jesus was essentially saying what many other sages have said for centuries,

“If you want Heaven on earth, then this is where to start: Unconditional Compassion.”

Even if you don’t believe there is a God… even if you think Jesus was just some homeless guy who walked around telling stories centuries ago, you have to admit… he’s got a pretty good point.

As hundreds, thousands — maybe even hundreds of thousands — of people in our communities face the possibility of losing their homes due to the economic fallout of this health crisis, we need to ask ourselves, How are we going to respond?

If government programs and private non-profits are already maxed out, what’s going to happen when we get this giant wave of evictees hitting streets?

Are we just going to stand there and watch them dangle off the edge of the cliff?

Dear God, I hope not.

If this article has sparked a little compassion within you, then please do not let this moment pass without taking action.

I would encourage you to do a quick web search and find out what your local community is doing to help their unsheltered citizens. It is likely that there are faith-based and/or secular programs already established that you can get involved in. Find whichever suits you and give them a call. Volunteer.

Talk to your church leaders, your Mayor, city & county council members, etc., and find out what they are doing. Get involved. Urge local and State government officials to take action, and then ask yourself, “Is it enough?” If not, then get others involved.

If you don’t know where to start, then start here: NationalHomeless.org

Don’t put it off. People are already facing eviction from loss of income due to the health crisis, and it’s only going to get worse. Moratoriums are lifting and being challenged in court as we speak. People are getting pressured to leave their homes, with no place else to go.

Remember: This could easily be you and your family out there.

Family guy, tech guy, nature lover, photo/videographer and author of Simple Respect., J.D. Kennedy has spent over 20 years studying and implementing the principles of Simple Respect. His book is a must-read for anyone who wants to learn how to resolve conflict and build relationships.