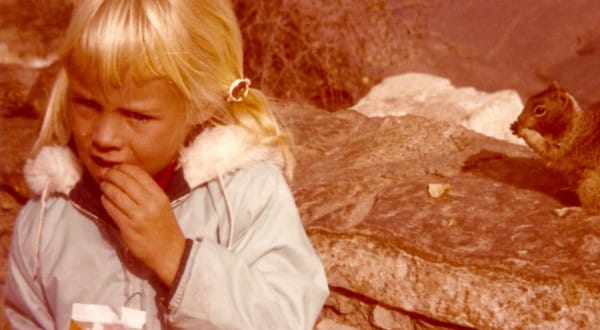 —
My father was not one for compliments. Instead, he was a master at rolling up an insult into a thinly skinned sarcastic remark, much like a sushi chef wraps up the eel or crab or octopus in a layer of rice and seaweed so the consumer is not exactly sure what’s in the middle until after the first bite.

In eighth grade, after getting my first (and last) perm and having my mom drive me home in tears because I’d have to go to school the next day with my new blonde afro, my father greeted my red wet face with a smirk and the comment, “Did you go and stick your finger in the light socket?” Not even my bad days were safe from his biting words.

Because of my father’s lack of positive reinforcement in my childhood, my memory is sharp when it comes to the two compliments he did give me during my eighteen years in his presence. These were true compliments, which meant no sarcasm or innuendo attached. Hence their importance to the extent that I remember them clearly decades later.

The first was when I was fourteen and we went out to dinner at Sizzler as a family. Afterward, my parents were in a good mood and we followed our meal with dessert at Baskin Robbins. Considering we rarely went out to eat — especially to a steakhouse — and even more rarely followed it up with ice cream, my little brother and I did as any other deprived child would do and ate like we had just been rescued from a deserted island. On the drive home, my brother didn’t feel well and within minutes was crying I’m gonna throw up I’m gonna throw up! My father, being protective of his new Oldsmobile with burgundy interior, demanded that my brother, of course, not throw up…or else.

While my mother tried to convince my brother to hold it because we were almost home (even though we weren’t and still had at least fifteen minutes to go) I was cupping my hands and prepared to catch his puke so that the burgundy interior wouldn’t be ruined. Immediately, however, my eye caught a box by my feet that held copies from the print shop that my parents needed for their business. I dumped the paper onto the floor and held the box under my brother’s mouth just as he vomited up his steak, baked potato, and mint chocolate chip ice cream.

And I caught every last drop.

My father was full of praise as he continued the drive home. Great job, Suzanne! That was really quick thinking! Well done! I held the box of my brother’s puke, hoping it wouldn’t leak through, and smiled all the way into bed that night.

The only other occasion I received a compliment from my father was when I was seventeen and I overheard him speaking to my mother (I’m still counting this as a compliment even though it wasn’t said directly to me). They were talking about my lack of prospects for what I could do after high school, and also the fact that I didn’t have a whole lot of so-called “assets” such as a great GPA or athletic accomplishments. But I will say this about her, my dad said as I remained frozen in place on the other side of the door. She is so…nice.

He was right. I was nice. I was so nice. The nicest! So that’s it, I thought. This was what I had been searching for all along! So that’s what I needed to do to get attention. Ha! I’d figured it out! And thus began the next two decades of my life during which I held tight to my only two virtues as deemed by my dad: I was a quick thinker in an emergency situation. And I was nice.

Suffice it to say that being quick on my feet when someone was sick certainly came in handy when I was raising three children. Being nice, however, didn’t come with the same results. I had interpreted niceness as that quality which my father would have approved of: I was nice if I was quiet, or if I had only good things to say. I was nice when I didn’t interrupt or express myself. I was nice if I didn’t argue and if I knew my place. I was nice even when others weren’t.

I was especially nice to anyone with a penis, given that my mother did not have a penis and no one cared — especially my father — if anyone was nice to her. I also surmised quickly that whether or not anyone with a penis was nice to me was of no concern, such as when I chose men to marry who were certainly not nice to me (putting one’s penis into someone else besides your wife again and again would qualify as such) and yet since my father had the same habit (of putting one’s penis where it doesn’t belong) it wasn’t anything to get bent out of shape about, even if it was your own daughter who had to eat that cheating sandwich.

Note: My father would certainly not think I was very nice in my excessive use of the word “penis.”

In my life’s effort to be nice, which subconsciously was driven by a long-ago desire of mine to be loved by my father, I have placed myself in such situations with men — husbands, friends, even strangers — within which I am the peasant and they are the king, and all my efforts to be a good human were dependent on them seeing how nice I was. What I didn’t recognize at the time, and over a few decades, was how this quest to be the nice girl was slowly killing me and dooming me to a life spent in a race that I couldn’t win.

Being a nice girl is what got me in trouble with men. To be nice meant to be polite, which over the years in an abusive marriage culminated in my constant attempt to mask my pain with fake smiles so that I wouldn’t make someone else uncomfortable. Being a nice girl meant following the rules, of which were made by the men I loved who had a vested interest in keeping me quiet and subdued. On those occasions when I wasn’t nice, such as when I stood up for myself or tried to enforce boundaries, then I was seen as mean, and Was that the kind of woman I really wanted to be? This opposition of nice/mean soon led me to avoid the comparisons in any way at all. So then I became a silent nice girl. And those with penises whom I loved approved.

It wasn’t until my late forties that I finally began un-fucking myself of this self-abusive behavior. Once I pulled back the curtain on the wizard who was always telling me to be nice, the truth about this destructive adjective was revealed. I learned just in the nick of time that this attempt of mine to show others how nice I was in each case was actually putting another nail in my coffin. For how could I jump through the hoops and balance the balls on my nose to prove to those I loved how nice I was without causing serious emotional injury to myself whenever I was denied?

The most important thing I learned, however, was found at the root of niceness, at which point I discovered its opposite isn’t actually being mean, but instead being kind, toward one’s self above all.

Niceness is an action that is outside of ourselves. Niceness is placating, obedient, subservient. Kindness, on the other hand, is the very essence of truth and when we give it — both to ourselves and to others — we are offering a gift from our soul, the very essence of our being. Niceness says “Whatever you say, sir” while kindness says “I will not accept your abusive behavior because it’s hurting me.” Niceness demands loyalty to the other, while kindness wraps your spirit in a warm hug and whispers “I’ll take care of you.”

In the past, being nice only helped those around me (especially those with penises — dang it, there I go again) continue with their bad behavior while I suffered within. Today, kindness comes from a loving place within that connects me to myself and the world around. I am safe here, knowing that what others may think of me (You’re so mean! said my ex every time I called him on his bullshit) is unimportant to what I think of myself. Being nice, being a good girl, never brought anything but a slow eroding of my spirit and a constant reminder that I was always one step away from a slip-up that meant I was back to being a mean girl without judge or jury to give me a fair trial. Being kind, however, rids my life of pointed fingers, of spending my time fitting into someone else’s ideal, of wasting my energy making someone else comfortable while I wither away in discomfort.

It is kindness that I now cultivate and nurture within so that not only will I be taken care of in times of trouble or unrest, but also that I can extend to others around me who haven’t quite found their way and are being way too hard on themselves in all things just like I used to do.

Or in other words, they’re being nice.
—

Facebook8Tweet3PinEmail1Shares12
wpDiscuz
Share this ArticleLike this article? Email it to a friend!
Email sent!