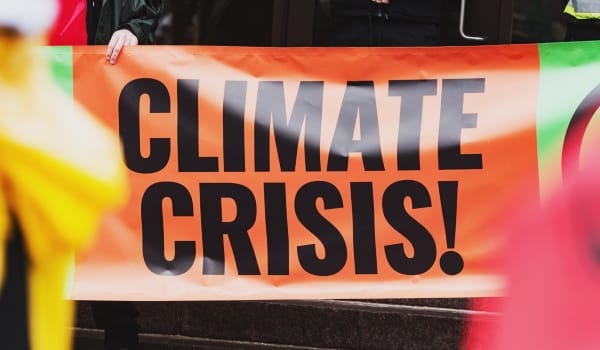 —
Just before my 57th birthday, after a lifetime of professional work, paying my taxes and obeying the law, I found myself in a police cell with a single blanket and a hard shelf to sit or lie on. The sergeant who had booked me in leaned towards me and said: “You do realise we’re all with you on climate change?”

This was the first night of Extinction Rebellion’s London actions in April. I was arrested on Waterloo Bridge in the early hours of the morning. We had been sitting on the ground for several hours when the arrests began. I was surrounded by younger people singing protest songs as they came to remove us one by one. I felt strangely relieved when they came for me with handcuffs and bundled us into a minibus.

I had 13 hours in the cell, on that first occasion, to reflect on what had driven me and so many others to do this. Everyone in Extinction Rebellion has a different story, but one thing we all share is growing frustration at official inaction. I lecture on transport and climate change so I have had to read the worsening scientific forecasts and reports from the UK’s Committee on Climate Change – they’re accepted when they call for targets in the future, ignored when they call for action to meet those targets.

I have advised government departments, local authorities and political parties, mainly about reducing road traffic. Many of them are willing to listen; some are willing to act, but it has all been too little too late. The UK has cut its carbon emissions since the Climate Change Act in 2008 almost entirely through changes to electricity generation, but in recent years progress has stalled when we need to accelerate.

Transport is now the dirtiest sector, emitting over a third of UK carbon emissions – and rising. Since 2013 the main objectives of transport policy have been to build more roads and expand airports. Aviation is a particular problem. We can electrify most road and rail transport but there is no prospect of mass low-carbon flying before 2050, when the law says we must reach carbon neutrality. We may be able to offset small quantities through tree-planting and carbon capture, but not the quantities we are heading towards.

Temperature records have been smashed all over Europe this year, but the really frightening prospects are the “tipping points” that could cause global heating to accelerate beyond our ability to adapt: melting polar ice, melting permafrost, dieback of forests – some of these have already begun.

When I talk about these things I get upset and that worried me as I prepared for my court case this week. I had a top-class expert witness in Prof Paul Ekins, who has advised the government and international bodies on climate change. I was surprised to hear the prosecutor say they accepted his evidence, which excoriates the government for failing to follow its own climate laws.

As I spoke from the dock about our failure to stop climate change my voice began to break and I struggled to hold back the tears: for the planet, for future generations, for the people who are still trying? I don’t know, but the Daily Mail gleefully misreported this as “lecturer sobs in the dock as he is fined over climate protests”. No great surprise there. Many others have offered their support or affection, and that’s more important.

Coincidentally, I am writing a book about transport protest movements. I have studied movements that have succeeded and some which failed. The reasons are different in each case, so I do not know which tactics will be most effective, but I do know that conventional politics stand no chance against the existential crisis we now face.

Since April I have heard from insiders how attitudes within government are shifting, despite the distractions of Brexit. I have also heard lots of excuses: “What’s the point? The Chinese are never going to change,” some people say. Maybe. But even if we ultimately fail and humanity succeeds in wiping itself out, I’ve often thought: how would I want to have behaved? If you have ever felt the same way, we are a broad movement and our doors are always open.

A version of this post was previously published on Ecowatch.news and is republished under a Creative Commons license.
—