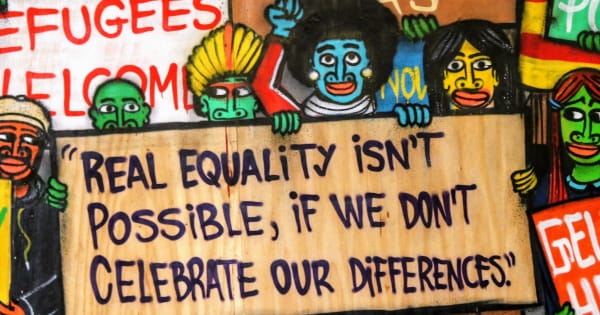 A decade ago, Jay Smooth released a video entitled, “How To Tell Someone They Sound Racist.” The message was straightforward: Focus on the deed, not the person. Don’t accuse someone of being racist (or, worse yet, “a racist”); instead, emphasize that the action is racist.

Smooth’s emphasis is on the idea that calling someone racist puts them on the defensive, and less willing to listen.

In his new book, “How to Be an Antiracist,” Ibram X. Kendi presents an even better reason to focus on actions, not people: “Racist and antiracist are not fixed identities. We can be a racist one minute and an antiracist the next. What we say about race, what we do about race, in each moment, determines what—not who—we are” (p. 10).

Despite the title, “How to Be an Antiracist” is not a manual or a step-by-step guide. It’s much more complex than that. Throughout the book, Kendi weaves three threads: An often confessional memoir, snapshots from the United States’s racist history, and an in-depth commentary on modern politics.

Kendi’s personal memoir details his development towards antiracism. As a child and teen, he resisted public education and underperformed. A major turning point was when he wrote (and presented) an award-winning speech on what Martin Luther King, Jr. would think of today’s black youth.

He came to realize that his speech relied on racist ideas. He was perpetuating racism by supporting the narrative about lazy, disenfranchised black people—“them n****rs” (pp. 136-137)—without considering the greater social context. Also, by distancing himself by berating his black peers, he was relying on a complex model that has racism at its heart.

An antiracist, Kendi writes, is “one who is expressing the idea that racial groups are equals and none needs developing, and is supporting policy that reduces racial inequity” (p. 24). This is contrasted to both assimilationism and segregationism, both of which rely on the notion that one culture (typically black) is inferior to another culture (typically white).

In college, Kendi began to explored the dueling consciousness that runs through the lives of many African-Americans: “Antiracist pride in one’s own race and assimilationist desire to be another race” (p. 109).

This dueling consciousness is echoed in the writings of W. E. B. DuBois, who “believed in both the antiracist concept of racial relativity… and the assimilationist concept of racial standards. … In other words, he wanted to liberate Black people from racism but he also wanted to change them, to save them from their ‘relic of barbarism’” (p. 29). DuBois had internalized the racist concept that people of African descent were inherently inferior to those of European descent.

As Kendi studied for the GRE to get into graduate school, he came to realize that the so-called achievement gap was really an opportunity gap, a concept explored in depth by education researcher H. Richard Milner IV (“Start Where You Are, But Don’t Stay There”).

“Not until my senior year in college,” writes Kendi, “did I realize I was a fool for thinking I was a fool.” He was attending Florida A&M, an HBCU, but he was taking a GRE prep course at Florida State University, in a class dominated by white students. The teacher claimed the course would boost GRE scores by two hundred points.

One day after class, Kendi came to a realization. He was lifting weights, and thinking about how the best weight lifters had proper form: Strength alone didn’t make one a great weight lifter. On any metric, you can improve performance by either improving strength or improving form.

The GRE classes, and standardized test prep classes in general, weren’t improving intellectual strength, they were improving test-taking form. “The teacher was not making us stronger. She was giving us form and technique so we’d know precisely how to carry the weight of the test” (p. 100).

As Kendi’s threaded narrative unfolds, a picture emerges of the way in which centuries of racism have created a self-feeding cycle: People from Africa were deemed less intelligent, less cultured, and less willing for self-improvement, and so systems were created to reinforce this perspective, which are then used to prove it.

But Kendi goes further than this. He actively pushes against the notion that white people are, as a class, racist and that black people, as a class, are incapable of racism. He freely admits his own racist thoughts, words, and deeds. “Denial is the heartbeat of racism,” he writes. “How often do we become reflexively defensive when someone calls something we’ve done or said racist?” (p. 9).

Without directly acknowledging our own biases, we cannot move forward.

Additionally, Kendi paints a picture of racism that is far more complicated than skin color. He uses an analogy to cancer: Racist policies have metastasized into every possible intersection. In specific chapters, he discusses the overlap of racism and classism, sexism, and heterosexism.

Kendi also discusses the key, often misunderstood, distinction between segregationism and separatism. In 1954, the Supreme Court decided that the existing “separate but equal” decision (Plessy v Ferguson, 1896) was flawed, and ordered that segregated white schools be opened to black students.

The primary problem with school funding, though, was related to opportunity and funding: Prior to the 1954 Brown v Board of Education ruling, many white schools received much higher funding, often over ten times as much. Black schools were failing not because they were black spaces, but because they were being financially starved.

After Brown, black students were brought into white schools, but black teachers were left out. Today, “non-White students fill most of the seats in today’s public school classrooms but are taught by an 80 percent White teaching forces, which often has, however unconsciously, lower expectations for non-White students” (p. 177).

The Supreme Court had properly “undermined the legitimacy of segregated White spaces that hoard public resources,” but had instead legitimized the notion that white-dominated spaces were inherently superior to black-dominated spaces.

This is a pattern that Kendi discusses repeatedly throughout the book. The assimilationist perspective relies on the notion that White Culture is US Culture. In Brown, the Supreme Court decided that white education was superior education.

As a teacher of students from a variety of cultural backgrounds, I have seen that many prefer to be with others from a similar background. They are not (necessarily) being racist in doing so; most of them interact perfectly well in classroom settings with all their peers. They just happen to prefer separated spaces.

Despite its low page count compared to Kendi’s preceding book, “Stamped From the Beginning,” and its flowing writing style, the book is thick with content. As a teacher, I found myself focusing most on the passages of education, but there is so much more here as well.

And while it is not a manual in the strict sense, Kendi’s comprehensive, vulnerable approach creates a solid model for confronting our own racist ideas, and dismantling them. This is an excellent and crucial book.
—

—
Photo by Matteo Paganelli on Unsplash