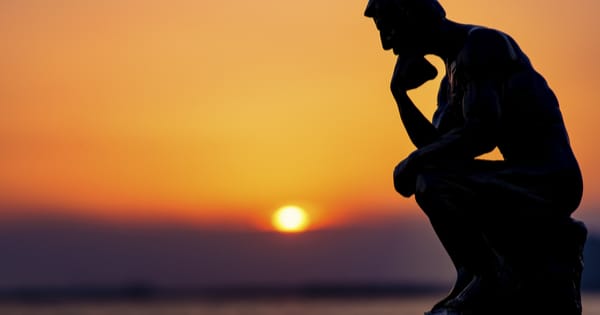 Anyway, let’s get to business. I have good news and bad news.

The good news is that you’re dead. The bad news is that I have to resurrect you. You see, before you died you were quite far indeed from achieving religious or philosophical enlightenment. So I’m afraid that if I let you into heaven now, you’ll muck things up. (You’ve heard of Lucifer, yes? A bad apple, that one. If only he could have kept his own apples to himself…)

Anyway, heaven is an exclusionary club. So after I wipe your memory I’ll be sending you down again — for the 1,534th time, actually— to see if the 1,535th time proves the trial that secures your permanent presence here in heaven.

Your success or lack thereof depends on your choices. Here’s your first choice — the only one you’ll make in this interregnum between death and life. Think of what you learned in your past life, and use that knowledge to make the right choice.

(1) You inherit a trust fund. A baby billionaire! Even your baby bib is made of the finest gold. Upcoming becoming an adult billionaire, you travel the world via private plane, eat delicious cuisine, and drink the finest wine, all while cheating on your significant other with beautiful men and women. (Please note that as the supernatural being that created the universe, I couldn’t care less about trivialities like which combinations of genitalia touch one another.) Despite your hedonistic lifestyle and your appalling lack of curiosity — or maybe because of them, given the intellectual state of too many humans— you eventually become the President of the United States.

(2) You inherit a dilapidated bamboo hut in the decidedly undemocratic “Democratic People’s Republic of Korea.” A baby pauper! Your overworked father dies from, well, overwork. Your mother struggles to make ends meet. Your childhood responsibilities mean there’s no time left to study for a formal degree. After your mother smuggles you into South Korea, however, you discover a love for reading, especially for philosophy. As a middle-aged adult, now living in the United States, your telemarketing job never lets up, especially because the newest president — a billionaire — has cut corporate taxes and halved the public funding you need to support your ailing mother. You have children and a wife or husband who love you more than anything else. The writings of a philosopher condemned to slavery who died thousands of years ago help you deal with life’s inevitable tragedies. You die, anonymous but surrounded by loved ones.

This story of mine is meant to make a point: Life is about choices. If we’re lucky, we have an instruction manual — the Bible, the Quran, the Torah, the Upanishads, modern consumerism, custom or “common sense”— to help us make those choices. To preserve the comfort of opinion without the discomfort of thought.

Increasingly, we humans aren’t so lucky. As religion has declined, Friedrich Nietzsche’s predictions have proven frighteningly correct: We’ve exchanged supernatural gods for political, social, sensual, and material ones. Some devote our lives to sensual pleasures; others, to power; a lucky few, to love; a misguided few, to in-group tribalism; and so on.

But all in all, there’s a sense that we’re adrift. That we are in an ocean and that, though we used to know to where we were swimming, now we’re just … floating. So how can we reclaim a sense of purpose? How — instead of bobbing about, waiting for death — can we start living again? Where can we turn to for principles about how to live a good life?

The answer is simple, although its subject matter can be complex: Philosophy.

Known to the ancient Greeks as the love (philo) of wisdom (sophia), philosophy in antiquity was less intellectual hobnobbing and more a sort of life-coaching. The questions were not petty, but involved fundamental issues of human existence. Chief among them were what a good life looks like and how to attain it.

Ancient people struggled with the same problems we do. As such, philosophy contains wisdom that is often better than any modern self-help book. Indeed, philosopher Albert Camus helped me rationalize one of my greatest existential conundrums, and it has continued (largely through Stoicism and Taoism) to come to the rescue.

This immense value is why I was delighted to learn of How to Live a Good Life: A Guide to Choosing Your Personal Philosophy, a new book that introduces readers to many of the same philosophies that helped me. Under 300 pages (impressive given its scope), the book gives readers a survey of much of the same life-changing medicine philosophy gave me. (Given skyrocketing rates of depression, suicide, and alcoholism, the work seems especially well-timed.

Recognizing that wisdom is to be found across traditions, the work goes through several different philosophies — including religions, which (yes) are schemes for philosophic thought. In order, these are:

As you read, you will probably identify with certain philosophies more than others. That’s fine. The chapter that really did it for me was the Confucianism one by Bryan W. Van Norden. Confucianism’s emphasis on healthy interrelationships as key to (1) healthy individuals and (2) healthy societies struck me as profound. Too many of us today undervalue our relationships. We seek instead of love, posturing instead of intimacy, independence instead of responsibility. These selfish and dishonest values have created a society that is, in my view, profoundly sick. (Feel free to disagree.)

Ultimately, one reward of studying philosophy is learning the importance of having clear values. For values tell us what is worth pursuing — and what’s not. They help us distinguish between what society tells us is valuable, and what’s actually valuable. Most of all for your question to live well, you cannot know how to live your life — what choices to make — unless you know what your values are. For your values are what give you direction, purpose, and (most importantly) meaning.

How to Live a Good Life is a great way to begin discovering what’s worth valuing.

Facebook24TweetPinEmailShares24
wpDiscuz
0
0
Would love your thoughts, please comment.x
()
x
| Reply
Share this ArticleLike this article? Email it to a friend!
Email sent!