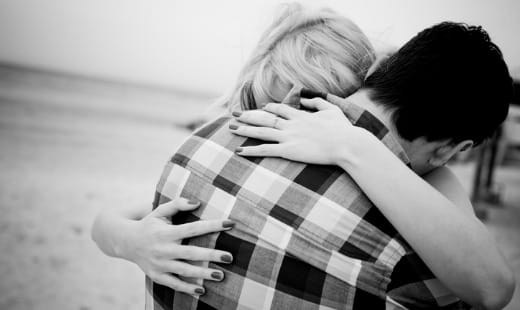 Excerpt from “How Women Actually Feel about Men Who Cry – Part I”:

To continue to heal my perception of how women interact with male emotionality, I decided to ask some of my most eloquent, wise friends, colleagues, and family members how they felt when their male partners cried in front of them. The exact question I asked them was, “How do you feel when your partner cries in front of you?”This is how they responded…

“I believe it’s a beautiful honor to witness the feelings of another. To be trusted to share in the depths of someone’s happiness, pain, grief, sadness, or bliss can be incredibly bonding.

As a deeply feeling person, relationships and communication have always been easier for me with men who feel deeply as well. Knowing that my partner could “go there” with me, even if only occasionally, built an element of trust and a much deeper level of connection.

I’ve had partners in the past who’ve been able to cry freely in front of me. Those were some of the most memorable moments in our relationship and times I felt closest to them. It was as if I had been gifted access to an extra special layer of their being and was able to understand who they were at the core, so much more.

I’ve also had partners that seemed unable to feel much at all. Not by any fault of their own – mostly thru the conditioning of how they were raised, and an almost insurmountable need to be/feel/seem like the tough guy that could handle anything.

When emotions are stifled, pushed down, or unable to be acknowledged by my partner, it feels like an invisible wall is simultaneously being built up to keep me and others out. As if there’s an unspoken attempt on their part to hide a bit of themselves from the world, perhaps even from them self.

I often realize this isn’t personal, but when in a committed relationship with someone I love, the feeling that I’m being shut out or not getting the true picture of what’s really going on with my partner can be a challenge to intimacy.

The men in my life who’ve been unable to cry or express much emotion have also had a hard time understanding my feelings or those of others – no matter how much they wanted to.

The tears of another could make them incredibly uncomfortable, as they aren’t something these men had ever really learned how to deal with. This, at times when I wasn’t as strong in my sense of self, would make me find it easier to not be fully self-expressed or show the depth of my emotions around them. The lack of empathy, understanding, or validation of what I was feeling at the time was often more uncomfortable than the feeling that brought my tears in the first place. This created a vicious cycle of two people squashing tears, feelings, words, and emotions. Within the confines of a committed relationship, this has definitely been a recipe for confusion, resentment, and eventually the crumbling of what we wanted to build together.

I would love there to be a societal shift where crying (particularly for men) isn’t seen as something that is weak, feminine, or hormonal. Rather, simply seen for what it really is, a release of immense emotion. Not only would our relationships with each other likely be stronger, but our understanding of ourselves would be as well.

It’s always seemed to me that the men I’ve known who allow themselves to cry in front of others, or cry at all for that matter, are the ones that appear to experience all of life at greater depths. It’s been my observation that they enjoy everything more. Food, friendships, sex, entertainment, travel, and even relaxation seems a bit more satisfying when experienced by “deep feelers”.

The ones that hold back, or aren’t even all that sure about how to truly feel a wide range of emotions, sometimes seem to be living in a way of “going thru the motions”. They don’t get too mad, or sad, or worked up in ways that would generate tears or alert anyone to a lack of emotional range. But when enough time is spent with them, it can become apparent that they often don’t know the difference between existing and really living. In a way, it’s tough to watch someone you love so much be responsible for their own life and emotions, while also knowing they may have no idea what would be in store for them if they stepped outside of the realm of feeling neutral about most things in life or being in tough-guy mode.

We’re all a work in progress. Everyone is continually growing in their ability to process their experiences and enjoy life to the fullest. However, it’s been my experience that those who allow feelings to wash over them freely, even if those feelings make them cry, these are the ones that seem to ultimately find their way to a happier life the fastest.”

“I would love there to be a societal shift where crying (particularly for men) isn’t seen as something that is weak, feminine, or hormonal. Rather, simply seen for what it really is, a release of immense emotion.”

“When my partner cries in front of me I feel a combination of gratitude, responsibility, and stillness. Anything else going on in my mind or body goes completely quiet and I want to focus all of my attention on them in a non-intimidating, soft way. It reminds me of walking in a forest and the moment I realize a deer is watching me. I want to appreciate my partner’s surrender so I ground myself, drop into my body, and try not to react too quickly. I hope to let the tears flow as much or as little as they need to before I say anything. I’ll want to hold them and be physically close.

I’ve noticed I’m more moved by when my partner cries than anyone else in my life because I can sense that the tears had to move through multiple layers of resistance to crying at all, and especially in front of me. Just the fact that the tears made it through that assumed pressure to “man up” and to this moment takes courage and feels important. I think there’s strength and beauty in surrender so I’m grateful to be given the opportunity to connect and support my partner on a more meaningful level. The experience also carries a sense of responsibility because I know my partner has been shamed for showing his emotions in the past and I really want to be a step in a positive direction. The more I can demonstrate their feelings are safe and appreciated by me I hope they’ll feel a little more comfortable the next time they consider bringing it to me. Ultimately, I hope my partner will grow to trust all emotions are safe in my presence and by experiencing them in front of each other, we can help lighten the emotional load we carry throughout the rest of life.”

“From my perspective, it engenders a lot of respect to see a man who is comfortable feeling anything; even, and especially, what makes him uncomfortable and what affects him most deeply. I think this is profound to see in anyone, not just men. It shows a man has mastered himself to the point where he faces everything he’s got in order to progress through it. It also shows he’s willing to share more of himself, and that he trusts me enough to reveal himself more fully.

What can be frustrating is that if a man never shows how he’s feeling and tries to keep the lid tightly shut on any emotions he doesn’t feel comfortable expressing, I can feel the incongruence between his actions, and what he is really thinking and feeling. The outside no longer matches the inside. This can create a sense of mistrust because deep inside, I know he’s not being open and honest with me, nor is he being open and honest with himself.”

The idea that women can’t accept male emotions is completely false. It isn’t that women can’t accept male emotions (it isn’t a gender thing at all), but simply that any emotionally suppressed person will have a significantly harder time accepting someone else’s emotions. Suppressing our emotions to fit some arbitrary gender-box is a significant factor in what leads men to become suicide statistics, mass shooters, rapists, and murderers. If we aren’t letting our emotions be what they are day to day, then they will mount into an all-consuming erupting volcano of unmanageability.

So do your part. Feel your feelings. Hold space for men to feel their feelings. The way out of the limiting social construct of the man-box is to feel your own feelings and be accepting of men when they feel their own.

If this article touches you, I implore you to send this to a man who you think might need to read it.

Dedicated to your success,

A version of this post was previously published at Jordan Gray and is republished here with permission from the author.
—
RSVP for Love Sex Etc. Calls

Sex and relationship coach Jordan Gray helps people remove their emotional blocks and maintain thriving intimate relationships. When he's not coaching clients or writing new books, Jordan loves to pretend he's good at surfing, immerse himself in new cultures, and savour slow-motion hang outs with his closest companions. You can see more of his writing at JordanGrayConsulting.com