Get Daily Email
Join/Login CLOSE
Home / Featured Content / Human Fatherhood is Diverse: They Do What They Need To Do 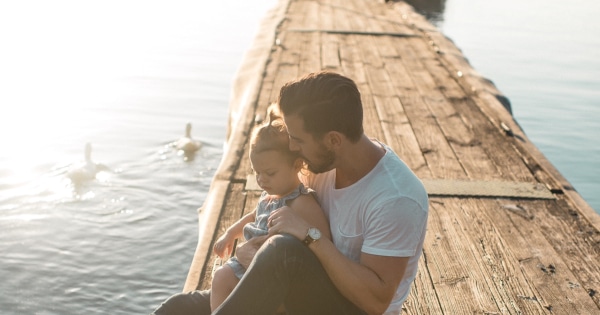 By Professor Peter B. Gray

One of the strengths of human parenting is how much it can adapt to different conditions and places. Fathers do what’s needed.

A key feature of human fatherhood is how different it is between societies and how quickly it can change over time. Anthropologists have studied why this variation takes place, distinguishing between “direct care” (holding, carrying and closely interacting with the child) and “indirect care” (providing food, protection, and an inheritance).

For most of the 150,000 years of the history of modern humans, we have lived in hunter-gatherer societies – this is where we started. These societies see the greatest amount of direct care by fathers. This can be seen in the few remaining hunter-gatherer societies in the world today, such as the Aka and Hadza in Africa and the Bofi in Africa. Aka fathers are the most involved fathers in the world today, with their children within arms’ reach almost all the time, and holding small children nearly quarter of the time (that is, six hours a day!)

In no society, Aka included, do fathers do more than mothers do. Also, other family members are always involved – grandmothers and older siblings. Human parenting is a group activity, perhaps the origin of the saying, “it takes a village to raise a child”.

In some societies, the father’s role increases as the child increase in age, whilst in other societies, including modern societies like the USA, it goes the other way, with fathers less involved later on.

In some societies, but not all, fathers invest more in caring for boys than girls.

In most societies, fathers play more than mothers do, though this is not the case in the Aka society, where fathers are so involved in direct care. In some Asian countries also, fathers don’t play so much – for example, in India, Taiwan, Malaysia, and Thailand. There is much debate about rough and tumble play – is it something special needed by children as part of their socialization, or is it the mark of a father using the scarce time to make as much of an impression on his children as possible?

Anthropologists have debated why direct care by fathers appears to have got less as societies have developed beyond hunter-gatherer systems. They have found that when men have more than one wife, they invest less in the care of their children. Fathers also invest less in more hierarchical and competitive societies, particularly ones that are involved in the war, where men are called to fighting.

The last 50 years in developed countries have seen very large increases in active fatherhood, albeit starting from a very low level and not reaching anything like the level of the hunter-gatherer societies in which we originated. In a study covering USA, Canada, Australia, and 13 European countries, the average time that fathers spent with their children increased from 30 minutes a day in the 1960s to 70 minutes in the 1990s (whilst mothers increased their time from 124 minutes a day to 167 minutes).

We believe the main reason for this is job mobility – as parents live further away from extended families, fathers play a bigger role in the caring.

In many early societies, fathers play an important role in the initiation of adolescent boys. In East Asian societies, the role of the father has been defined more in terms of respect and guarding the family honor, though this is shifting towards an intensive preparation for children to succeed in a highly competitive labor market.

CONCLUSION: FATHERS DO WHAT THEY NEED TO DO

We believe the thing that determines the extent of direct care by fathers most is the extent of risk faced by the child in that society. Where there is more risk men live faster and die sooner and the focus is more on mating and reproduction than caring. When the environment changes, the role of fathers changes very fast – hence the increase in direct care by fathers in modern times as we have moved to live in smaller family units.

And boys are raised according to the requirements of their environment to be parents like their own. And we can see from cross-cultural adoptions, that the child, whatever their origin, will adapt to patterns of the family in which they are raised. This socialization takes place mostly in the first seven years of the child’s life.

One of the great strengths of human parenting is how much it can adapt to different conditions in different places and at different times.

Photo by Caleb Jones on Unsplash