In an increasingly insular world, is it more important than ever to create international research communities? Doctoral Candidate Emily Vine reflects on her experiences as an AHRC International Placement Scheme Fellow at The Huntington Library in southern California.

Travel abroad is an inherent part of many historical research projects. Some actively choose subject matters which necessitate prolonged periods of time as far away as possible from Mile End: they find global connections within their subjects, spend semesters in archives overseas, enrol in immersive language courses over the summer months.

My research is about rituals of birth and death in early modern London. I had resigned myself to the fact that a lot of my material was, in fact, in London. I had not expected to have the opportunity to travel much further west than Kew.

This was short-sighted of me. I’ve since realised, happily, that historical research offers the opportunity to be part of an international network of scholars and research institutions which are open even to us souls who study only British history.

Earlier this academic year I was lucky enough to be awarded a fellowship as part of the AHRC International Placement Scheme, a programme which provides early career researchers and PhD students with funded fellowships at libraries and research institutions around the world. I spent three wonderful months at The Huntington Library in California, a world-leading research library famed for its early modern British historical manuscripts, and situated in the middle of an impossibly beautiful 120-acre botanical garden. It’s hard to imagine a starker contrast than between the leafy suburbs of Los Angeles and Mile End Road. 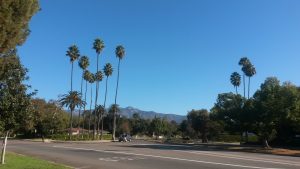 I had been a bit incredulous about the number of seventeenth and eighteenth-century British manuscripts that had found their way to large research libraries in the US: they could have just as easily been purchased by a wealthy philanthropist with designs to open a private archive in Slough. I was undoubtedly lucky that my manuscripts had ended their journey in southern California.

But in all seriousness, seeing this material within different contexts helped me to think about my source base differently, and allowed me to make links that I otherwise would not have made. I was also surprised to see how my approach to archival research was altered by spending a set period of time working intensively in one archive halfway across the world. Not only did it focus my mind fully on the project ahead of me, but it also led me to take more risks in the types of material I was requesting, to order up manuscripts I may not have bothered with had they taken up permanent residence on a shelf somewhere in Bloomsbury.

This allowed me to stumble across several gems I may otherwise have overlooked. Among my favourite scribblings were numerous child’s drawings interspersed among unconnected diaries and commonplace books, or slipped in underneath flyleaves. These charming, three-hundred-year-old squiggles, while not directly relevant to my thesis, served the purpose of visually reminding me of the humanity of the people whose surviving writing I was studying. 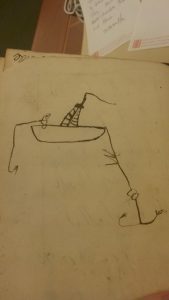 From The Huntington Library Collections. Photo by Emily Vine.

Beyond the manuscripts themselves, the fellowship gave me the opportunity to immerse myself in US Academia, to get a clearer sense of the different approaches taken by UK and US University systems, and to acclimatise to hearing slightly horrifying phrases such as ‘I’m a seventh-year PhD student.’ The Huntington felt uniquely like a cross between a research library and a university: it hosts a large number of long and short term fellows at any given time and runs an extensive conference programme. It also maintains a very close-knit and collegiate feel, supplemented by the availability, every Tuesday afternoon, of free coffee and several types of cake.

It was undoubtedly uplifting to spend each lunchtime sitting on a veranda in thirty-five-degree heat, spending research breaks wandering around palm trees and looking for hummingbirds and lizards. A world away from the bustling anonymity of the British Library, it was refreshing to see the same researchers in the reading room every day, to get to know the complexities and frustrations of their projects, to make educated guesses about who may be hoarding the books you’d repeatedly requested in vain. 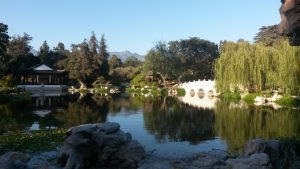 I spent my time with an assortment of local scholars based at universities in southern California, and those, like myself, who had travelled from Europe and further afield. The wisdom and kindness of this research community, alongside the expert advice of specialist curators at the library itself, undoubtedly led to new and exciting perspectives towards my own research.

We took advantage of organised trips to The Getty Centre, guided tours around The Huntington’s own art collections, conferences which drew audiences of international scholars, monthly seminar programmes, and weekly lunchtime ‘Brown Bag’ talks. I presented my own Brown Bag talk towards the end of my fellowship, and was delighted to have the opportunity to discuss my project with some of the leading scholars in my field.

It was once I’d returned to London, and found myself being subjected to the British Library on a gloomy January morning, that I realised just how fortunate I’d been to participate in this international research community. I’d heard my name yelled across the seating outside Humanities 1; the source emerged to be a friend I’d worked with at the Huntington, who lived in Washington DC, and who was just passing through London for a few weeks on a research trip. We are lucky ourselves to be based in a city as international as London, a city with leading universities and archives, and to reap the benefits of meeting, working and sharing ideas with researchers visiting from around the world.

I was extremely fortunate in my experiences, and I feel that universities and research institutions are increasingly recognising the value of international links, formal and informal. These opportunities are not limited to those who study global history: we are lucky enough at QMUL to have visiting fellows and regular exchange programmes with History departments such as Northwestern, Freiburg and Basel. Exchange and fellowship programmes are enriching experiences for those who participate in them, but they also encourage us to think more broadly than the bubble of UK or even London-based academia, to consider new approaches to our research, and to feel part of a research community that is international and inclusive.

Emily Vine is a second year AHRC funded PhD student jointly supervised by the Schools of History and English and the Geffrye Museum of the Home in Hoxton. Her research investigates rituals of birth and death as practised by religious minority communities living in London, 1600-1800. In 2016 she was awarded a three month AHRC International Placement Scheme fellowship at the Huntington Library in southern California, and recently participated in the History department’s exchange with Northwestern university.

This post was originally published by The History QMUL and is republished here with permission via Creative Commons License.

Photo by Victoria Kure-Wu on Unsplash