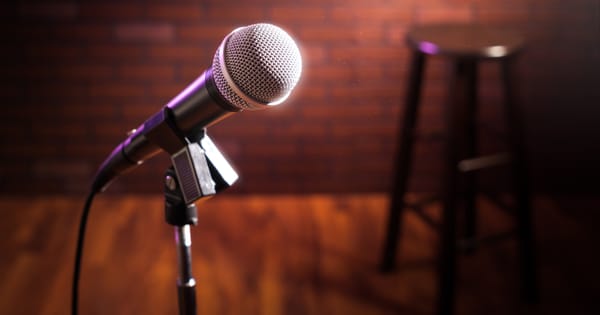 The promise was clear.

“The only person who ever regretted taking this class was the guy who didn’t invite anyone to the final performance.”

Those were the words of the person on the other end of the phone when I called to inquire about Poppy Champlin’s Comedy class.  I had seen the flyers around town for years. While I’ve incorporated humor in my public speaking, preaching and presentations, I’d never done anything close to Stand-Up comedy.  I’ve been intrigued and frightened by it for decades.

My first attempt to be a part of this class ended in failure.  I showed up in September, only to find the course was canceled since I was the only participant.  But two months later the minimum registrants of four had gathered to begin our journey into comedy.  Throughout the next six weeks, we would engage in a crash course in the world of Stand-up Comedy.  The final exam would be a live performance on a Saturday evening in December.  Each of us would prepare and perform an 8-10 minute set.  We were encouraged to invite friends and family.

Thank you to all of you who showed up, I was grateful for the support. How’d I do? Below or here you can watch my performance, and judge for yourselves.

What I learned over those six weeks.

Comedy is hard.  Many people think they are funny.  That may or may not be the case, but standing up in front of a live audience with a microphone, keeping their attention and sustaining laughter is not easy.

First off, this is public speaking on steroids.  If the fear of public speaking is the highest angst producing activity for US Americans, then add the expectation of generating consistent laughs. No wonder, I and my classmates were nervous backstage.  In Jerry Seinfeld’s recent Netflix special, Jerry before Seinfeld, there is a brief scene in which he teases the audience.  I’m paraphrasing, but the essence is this: “I know you’re thinking, I could do this, but I just decided to do something else with my life…like sell life insurance.”

This was, in many ways one of the hardest things I’ve done in a very very long time.  Imagine bringing material, yes, your own precious ideas to class each week, and having them summarily dismissed.  “Nope, that’s not funny.”  “Too long, get to the point.”   As I was describing the process to my analyst, he encouraged me to, “Think of it as having some narcissism burned off.”

Sheesh, now I’m getting it on two fronts.  I’m paying people for this kind of help?  And yet, our instructor Poppy Champlin, an experienced comic with credentials that included appearances with Rosie O’Donnell, Second City in Chicago, and Bill Maher, was a master of encouragement.  Her contagious and boisterous laugh communicated when you were on the right track. She challenged us and lifted us up along the way.

The combination of sharp criticism and celebratory praise was just right for me.  The honesty was so refreshing over other seminars and classes I’ve had where sugary politeness drowns out the opportunity for real learning.  “Comedy is different than other forms of communication,” Polly said.  “Each word, each phrase has to have a purpose.”

I think her favorite mantra was “cut, cut, cut.” Her edits, her suggestions were mostly right on target. If you disagreed with her, you could push back. The engagement was lively…and tremendously helpful.

The best comedy is all scripted.  When you go to a comedy show or watch Comedy Central, it often looks as if these people are just naturally funny.  All they do is get up on stage and start talking, random funny things must come to mind, and they just say them.

WRONG!  It’s all scripted.  Every single sentence is structured and tested and retested. Then it’s memorized, familiarized and incorporated into one’s very being.  Those seemingly spontaneous moments are plotted out.  Even those interactions with the crowd.

For me, this involved an editing process that had 12 versions of my script. Over time it was reduced down to a core 8 minute or six-page document. I spent every spare moment I had learning that script.  This included various techniques of reading it out loud, recording it, then listening to it over and over and over again.  Practicing both in my living room as well as in my head on walks or while driving.  If it looks spontaneous, and you don’t notice the preparation, that means someone spent tons of time preparing that performance.

Would I do this again? Absolutely.  However, at the three-week mark, my answer would have been “no way.”  I had this sense I was just failing miserably. But, like most things in life, the rewards come out of the struggle.

What’s next? Will you do more comedy?  Right now, I’m just enjoying this moment.  We will see.

I’m very intrigued by the area of humor and faith, because I think this is an untapped resource for us in the church. Humor can be effective in preaching, leadership and culture forming in our congregations.  Comedy is rooted in honesty, which has a closer sister in confession and absolution. I also believe that the best comedy comes from our personal lives.

I think of Molly Phinney Basket’s book Standing Naked before God. Plus there is the Humor of Jesus, an older book by Earl Palmer.   And one of my favorite classics and now out of print, Jurgen Moultmann’s Theology of Play. So, I’m very interested in exploring the connection between personal storytelling, comedy, and faith.  We’ll see where it all goes.

Hey, you never know, I may end up seeing you at a club…or in a cathedral.