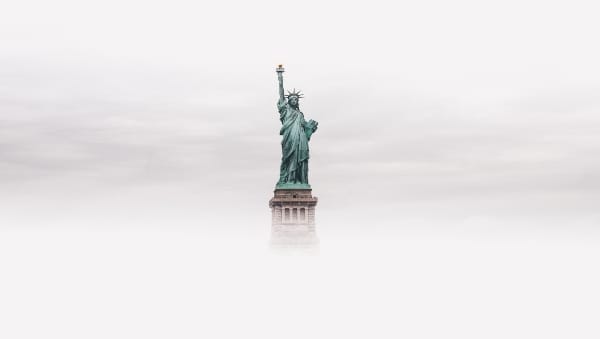 One side of my family came from the migration of the Huguenots. They were French protestants from the 16th and 17th centuries, were persecuted by the Catholic Church and the Monarchy, and sought religious freedom in America. Little did they know what they were starting. At the very least, they brought some more of that terrible Protestant work ethic with them. Or maybe they just brought wine and cheese. That’s my guess.

I have no idea if they were wealthy immigrants, like the ones Trump is seeking. It would seem not, since they were persecuted by both Church and Crown, which often rendered people penniless. And we descendants, most definitely would not be considered wealthy by Trump’s, and Stephen Miller’s, very skewed standards. We may have some bankruptcies among us, but even added up, not as many as Trump has. So there’s that.

We are all immigrants. Right Mr. Drumpf?

As has been said often, we are all immigrants. Even Trump’s family were immigrants (isn’t that right President Drumpf?), and certainly Melania’s. Apparently her parents are wealthy enough for Trump and Miller, since they have been granted a fast track to citizenship. Never mind that the Trump administration is trying to halt immigration that allows citizens to sponsor relatives. The only sponsorship or heritage they care about is which Fraternity or Sorority will reluctantly accept them because Mummy and Daddy are alums.

I don’t usually know the immigration status or family history of my Hispanic friends. Sometimes they tell, and sometimes I ask, but not always. I don’t know how my high school friend’s family arrived here. Or maybe they didn’t have to immigrate. Maybe they owned land when parts of Texas were still Mexico, before annexation. Which makes him more of a Texan than I. What I do know is that he and I forged an unlikely friendship between a small town, blonde, white girl, and a Hispanic guy from the very slightly larger and slightly more diversified “city” ten minutes away. We met through our church, a bastion of liberalism in a desert of conservatism. We bonded over faith, music, and just plain, old connection, when it wasn’t common to see friends of different ethnicities in our part of Texas.

As such, we played with it, in ways that probably couldn’t happen today. We would wait until we were in a crowd, and then start calling each other by stereotypical names. I was a gringa, a honky, and a cracker. He was a spic and a wetback. I’m not sure what would happen today, but mainly people avoided us and pretended not to hear. Especially after we burst out laughing. We saw it as a type of shocking performance art to make people think. Kudos and love to you, Kenneth Almanza. You were an amazing friend in a precarious time.

Two of my current best friends of Hispanic heritage are in Austin, where I was an immigrant in my own way six years ago. Believe me, coming to Austin from any other place in Texas is like entering a different country. I immigrated from Fort Worth, one of the outposts of Texas (I’m going to be in so much trouble with my Funky Town compadres.) Seriously, it was an actual fort and outpost originally.

Janie Mataya took me under her wing when our sons played basketball together at Southwestern University. When I moved to be closer to their games, she became my one of my dearest friends, and I consider her and her offspring and husband familia.

I met my friend, Edmo Mucoso, when he was dating one of my other best friends, Terrence Needom. For those of you who follow me, Terrence is my son’s godfather, and he is Black. When they started hanging out, I told Terrence I wanted Edmo in the divorce. As it worked out, we are all running buddies, no matter their current relationship incarnation. Or mine.

Edmo and I attend art openings, often where he is showing his own art. We attend some of the more avant-garde music performances in town. He is a wonderfully goofy, good guy, with a proud, San Antonio, Texas background.

Janie and I bonded over basketball, and since the boys graduated, we go dancing anywhere there is music. And that is a lot of places in Austin, Texas. We go to movies, where I talk and drive her crazy. She invites me to family birthdays and other holidays. She is mi Amiga especial.

I speak Spanish better than either of them. Edmo tells me he is called a “pocho” because of that. It means a non-Spanish speaking Mexican. He says it is definitely considered derogatory. But Hispanic people have had a tough history in American schools, many of which used to forbid them to speak Spanish. Parents made them speak only English at home so they could assimilate faster. We have come full circle with Spanish immersion classes and schools. Some of the adults who were cut off from the language of their families and ancestors are learning to speak it now. They are reclaiming their heritage.

I’m so happy all of our ancestors immigrated from somewhere to here.

Or stubbornly held onto their land when it was annexed by Texas and the U.S. If it wasn’t for their bravery we would not be friends. And that would be a huge loss.