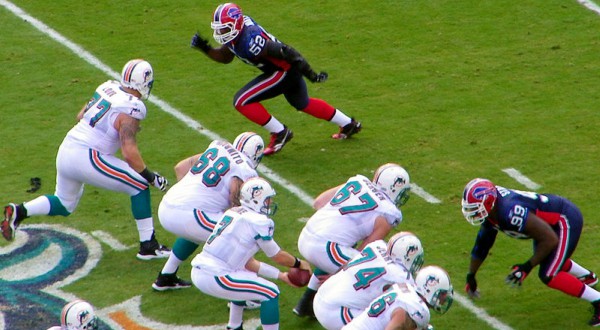 I say last, because prior to that 1993 defeat to the Dallas Cowboys, the Bills lost the three previous battles: to the Cowboys in ‘92, the Washington Redskins in ‘91, and the New York Giants in ‘90.  The four straight losses made the Bills famous and infamous, and while many have made the case that this was a show of futility on the grandest stage of sports, others, including myself, feel it demonstrates how historically great these Bill teams and  players and coaches were, given how few squads ever make it to the final game of the NFL season, let alone win it.

After that devastating 4-peat, the Bills, save for a few playoff appearances, have been decidedly mediocre – nearly three decades of mostly losing football.  As a fan, it’s been painful to suffer through so many difficult seasons, to root hard for a team that is out of contention early and often.  Yet, my ardor for the Bisons has not only not faltered but has intensified through the adversity.

It is a phenomenon not uncommon in sports, and not without good reason.  For example, in an article in Headspace.com by Dana McMahon (Why Do We Root for Teams That Always Lose?), she quotes at length Dr. Edward Hirt, a professor with the Department of Psychological and Brain Sciences at Indiana University who’s researched fanship and allegiance.  According to Dr. Hirt, it’s a mix of dedication and defiance that keeps fans of perpetual losing teams faithful.

There’s something that drives them to [keep watching] independent of how it makes them feel.  Even knowing ahead of time they’re going to lose.  It’s this sense of loyalty: ‘if I’m committed to them I have to support them.’  They take an almost perverse pride in ‘that’s what makes me different.’ That shows more about you in some ways than being the bandwagon person that jumps on a team when they’re successful.

I would like to claim that I have never been a bandwagon person, that I always backed the Bills, but it would be a lie.  The truth is when I first started caring about football, the team that caught my heart was the Redskins, and only because they were winning big at the time.  I was not alone in this regard; most of my childhood friends took to the teams in the national spotlight, such as the Cowboys, Steelers, and the Vikings.  In fact, it’s hard for me to recall any friends who were diehard Bills fans.   This was probably because the team during that era was quite awful, and, save for the brief period in the late 70’s when the controversial O.J. Simpson and the vaunted offensive line nicknamed the “Electric Company” (because they turned on the “Juice”) captured attention, quite boring and nondescript.

But things changed in the early 90’s, and the Bills winning ways coincided with me moving out of the area, settling first in Philadelphia Eagle territory, and then finally putting down roots in the heart of Giant and Jet land.  The combination of my hometown team being finally on top, and the feeling of connection I got when I watched and pulled for them, brought me fully on board.  And despite the later losing, it felt special be a Bills fan, part of a community that suffered with heart open and chest out.

As Dr. Hirt further explained in the article: “It’s a real bonding thing to feel connected with people who care as much as you do.  You get that win, lose or draw with sports.  What a great opportunity to feel connected to something that transcends ourselves.  We’re all looking for something.”

I know what I’m looking for when it comes to Buffalo – and it is not a Super Bowl victory, which, if materialized, would indeed make me infinitely happy.  But what I really want is for them to just be whatever they can be each season – good, great, or bad.  As long as they suit up each week, and allow me the chance to voice my fandom on social media, to shout at my television screen, to call family and friends and commiserate about a game, to just feel a part of Upstate, New York, that’s plenty enough for me.

Facebook30Tweet2Pin2EmailShares34
wpDiscuz
0
0
Would love your thoughts, please comment.x
()
x
| Reply
Share this ArticleLike this article? Email it to a friend!
Email sent!