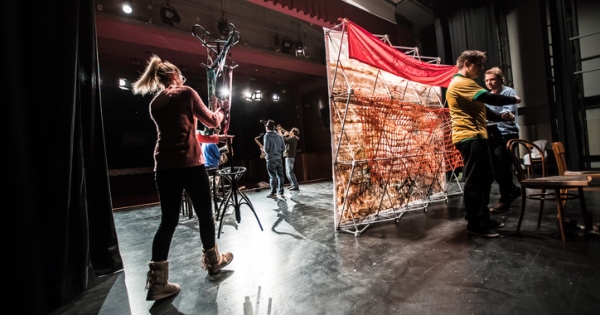 —
I recently worked at a local theatre in a carpentry and construction role, I was unfamiliar with the kind of work but when I received a call for a temporary gig there I figured, why not try it out? The first day on the job I assess the situation, there are about ten people total, most of the guys, we were all relatively new and inexperienced. When I was asked to grab an electric screwdriver and start unscrewing, I admittedly, wasn’t sure how to do it. For one, who knew that you needed to hold the chuck (head) of the screwdriver to insert the bit… well, I didn’t, again I was inexperienced. It wasn’t easy asking for help on the first task, and a simple one at that, but I swallowed my pride and did. As the days went on I noticed that my male coworkers were hesitant to do the same, ask for help. We’d be responsible for heavy machinery at times, and instead of admitting that they needed help they’d toil through the task, sometimes getting it right, most times fumbling around trying their best.

It’s commendable to take on a task you’re unfamiliar with and learn as you go, though oftentimes slow and inefficient. Being a guy, it can seem at times, that showing ignorance is a weakness. “Figure it out,” “man up,” two phrases I’d hear leading me to keep moving and get over it. In my professional experience, I’d often be commended for asking questions, as if it’s something that people don’t usually do. Spending one or two occasions admitting that you’re unfamiliar with something versus several doing the thing poorly or inefficiently; many struggles can be foregone with questions to those who’ve done a task before. We’ve strayed from the era of the 50s sitcom Father Knows Best, we’re free to admit, maybe we don’t always know what’s best.

Funny thing, most people are more than happy to help and enjoy being asked questions. Those who place judgment on individuals who come for help, I’d argue, don’t deserve much more than eternal space.

There are certainly occasions where you’re going to have to figure something out on your own, or the resources aren’t there for you to research, though we need to be more open to help. There’s nothing wrong with admitting you don’t know what you’re doing, or you’re inexperienced, everyone starts somewhere, men too!

Amir seeks to share his anecdotes, experience, and research on topics that interest him; join the conversation!

Facebook20Tweet1Pin1EmailShares22
wpDiscuz
0
0
Would love your thoughts, please comment.x
()
x
| Reply
Share this ArticleLike this article? Email it to a friend!
Email sent!