There are lots of different kisses between people who love each other. There’s the casual kiss on the way out the door in the morning. There’s the kiss filled with relief after getting home from a particularly hard day at the office, or the kiss at a party that’s really just an excuse to tell your love something you don’t want overheard by the rest of the partygoers. And then there’s the kiss that says, “I want to get you naked right now.” Lots of different kisses. Some are more meaningful than others, some nearly insignificant.

My oldest son had a significant kiss in kindergarten. It wasn’t one he participated in but one he saw. When my son was watching an episode of Glee, he saw two characters, both boys, kiss each other for the first time. He was mesmerized by it. He rewound the episode to watch it again. He made me and my husband watch it and told us it was his “favorite part.”

My son has grown up in a world where gay people exist. It’s always been a fact in his life that some boys marry boys and some girls marry girls. It’s one of those things that is normal, maybe even boring. So why was that kiss on television such a big deal? Well, it was the first time he had actually seen two men romantically kiss one another. Despite his liberal upbringing, he’d never seen that before.

We live in the Midwest, and it’s been my experience that gay men outside an urban area’s gay grotto are very careful about showing affection — and even more careful around children. The incredibly hurtful and dangerous myth that gay men are a danger to children is well known. The gay men we have known have always been careful to avoid even the merest hint of impropriety. When around our kids, our friends who are gay rarely even hold hands, much less kiss one another.

A few months after seeing that television kiss, our son announced he is gay. Now, some people might jump to conclusions, but make no mistake: Seeing that kiss did not make our son gay. Yes, it was romantic and lovely, but it didn’t change anything about who our son is. Watching that kiss was important and most likely helped lead our son to announcing his orientation to us, but it didn’t actually cause anything to change.

This kiss did not make our son gay: 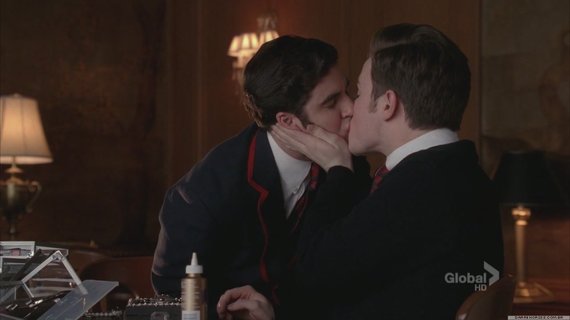 A kiss like this led to the making of our gay kid: 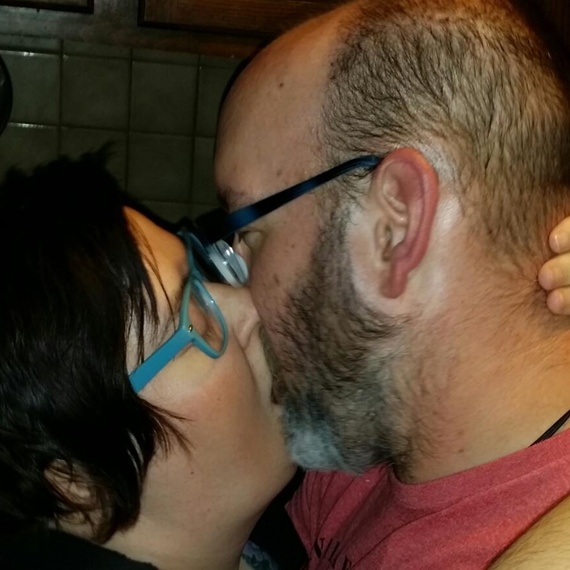 This is my husband and I. This kiss was after I got home from a long, hard day at work. I went straight into the kitchen and kissed my husband with all the relief of a week’s completion and the happiness of knowing that we would have the weekend to spend together. This particular kiss didn’t make any gay kids, but it makes me wonder which one was the culprit. Was it the kiss on our first date in college, when we were supposed to be studying but discovered much more interesting and fun things to do? Was it the kiss we had when my husband slipped onto my finger the engagement ring we had picked out together? Was it the kiss at the end of our marriage ceremony, in front of all our family and friends as they clapped and cheered? Or was it one of the many kisses we exchanged on the night we actually made our first child?

Over three years have passed since my son saw that first significant kiss, and another televised kiss is in the news, this one between newly drafted St. Louis Rams defensive end Michael Sam and his boyfriend. “Will anyone think of the children?” was the cry that rose up from conservatives everywhere. Yes, who will think of them? I know I did. I thought about my kid, my oldest son, my 9-year-old baby boy. I saw that kiss and thought about my son and how much the world has changed since he was born. My son needs to see kisses like this one, kisses of celebration between two men in love. There are too few of them in front of his eyes, and he needs to be able to see more. He needs to be able to see that his future will one day include kisses between him and a boy he likes, and one day a boy he loves.

So all those who rail against seeing the love that two men or two women can have for each other need to take a step back and think. The kiss between those two actors on Glee or Michael Sam and his boyfriend have absolutely zero chance of leading to anything that will create a gay person. No, the kisses that do that are between men and women, kisses that no one finds offensive, kisses that take place in movies, on TV, in public, and in households all over the country, every day. Those are the kisses that lead to making gay people.

George Takei has said that he supports “young, straight couples, because they’re going to be making the gay babies of tomorrow.” Indeed we have, and we are.

in article photos: courtesy of the author
top photo: torbakhopper/flickr

Amelia, I’ve always thought the idea of coming out was over rated. I’d like to live in a world where feelings/emotions are not hidden from loved ones and parents know their beloved child’s sexual orientation. Who needs that secrecy and pressure? You madame, and your husband, have nailed it 🙂

Facebook132TweetPinEmailShares132
wpDiscuz
Share this ArticleLike this article? Email it to a friend!
Email sent!