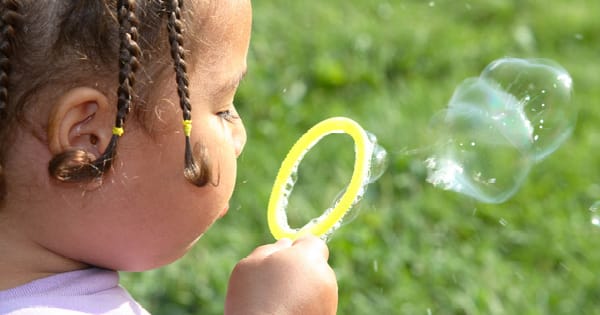 My whole life has been filled with words—big, bold, beautiful words. Enchanting words from children’s stories my mother read to me; explosive words from comic books I collected as a teen; lofty words from college textbooks; informative words I placed on the pages of newspapers as a journalist.

When my Dear Daughter (DD) was born, I couldn’t wait until she got older so I could finally hear her voice and cherish her first words: Mommy. Milk. More. Daddy.

But by 18 months of age, her words had not come. There were consonant sounds. There was babbling (ma-ma-ma-ma). There was even dancing and humming to music.

But not a single word.

My wife and I grew concerned. Our daughter was not saying “hi” and “bye” when we dropped her off at daycare like the other kids. A referral from her pediatrician led to an evaluation that revealed DD’s developmental delay seemed to stem from Sensory Processing Disorder, a neurological condition that causes difficulties with processing information from the five senses: taste, sight, touch, smell, and hearing.

No parent wants to hear something is wrong with their child. But if there is something, we hope it can be fixed or overcome.

And so, at 19 months, DD began therapy three times a week with an occupational therapist, a developmental therapist, and a speech-language pathologist.

No parent wants to hear something is wrong with their child. But if there is something, we hope it can be fixed or overcome.

This progress was encouraging, but nowhere close to the two-year-old described in the “My Baby This Week” series of emails I had signed up to receive from the BabyCenter that helps parents track a child’s development based on their birth date: “Your little one’s a budding conversationalist, even if you’re the one doing most of the talking. He’s beginning to ask lots of questions…”

But DD wasn’t asking any questions, which led to this question: Why?

We were told that each child blossoms on his or her own timeline and we should continue the early intervention therapy and track DD’s development as she approached the age of 3, when it would be time to transition to preschool.

Life went on. DD, a smart, affectionate and exuberant little girl, grew taller and a bit more expressive. She developed a penchant for Mickey Mouse, sparkly shoes, and Caesar-flavored green pea crisps. She formed a friendship at daycare with a toddler named Jackson. She learned to brush her teeth, go to the potty, wash her hands, count to 10, take direction (sometimes), ride a tricycle, help her mother water the balcony plants, and unlock our iPhones when we weren’t looking.

One morning, as I helped her get dressed, she suddenly hugged me and exclaimed, “You’re the best!”—a compliment I say to her almost daily. My heart melted.

I learned from my research on AutismSpeaks.org that Sensory Processing Disorder is closely associated with autism in that most autistic children have sensory issues. But I dismissed the idea that DD might be autistic because the condition is far more common in boys than girls.

Still, I noticed how upset DD would get with changes to her routine (the word “meltdown” comes to mind), how she didn’t seem to be in sync with the world around her, how she often repeated words or phrases from the speech of others or from her favorite cartoon (a behavior known as “scripting”, I learned later), but couldn’t hold a back and forth conversation.

Then, on a sunny morning in June, two months before DD’s third birthday, I stepped into a conference room at our district preschool and took a seat around a table with a teacher, a speech therapist, a social worker, a psychologist, and an occupational therapist. (My Dear Wife had to join the meeting by phone.) They had gathered to deliver the news: DD had all the signs of autism.

Two days prior, the preschool staff conducted a play-based evaluation of DD and determined her behavioral characteristics were similar to children diagnosed with Autism Spectrum Disorder (ASD), which is estimated to affect 1 in 68 children in the United States – 1 in 42 boys and 1 in 189 girls.

The news was both a relief and a worry. I was relieved to finally confirm the culprit responsible for stunting my daughter’s development but worried about what being neurologically different would mean for her future.

Because the staff’s findings were not a medical diagnosis, they advised us to follow-up with DD’s pediatrician for further evaluation. It was sound counsel but, at that moment, I didn’t need a weatherman to tell me it was raining.

I’m learning that when your child is “on the spectrum,” as the lingo goes, you’re on the spectrum with them, a spectrum of good days and bad, progress and setbacks, joy and frustration.

The staff seemed somewhat surprised my initial reaction was one of audible relief. It was as if they had expected me to break down in the conference room and cry. It was only later, when I was home, alone, that a swell of emotions rose within me and I felt overwhelmed—by anger, by an urgency to do something, by the avalanche of paperwork required to enroll DD in preschool, by the jargon and acronyms of the special education world: functional performance, local education agency, IEP (individualized education program).

Why did this happen to my daughter? Was it because I waited until I was almost 40 to have kids? I’d read that “advanced parent age” increased the risk of autism in children born to older fathers. Was it hereditary? Because I couldn’t think of any family members with a similar condition. A sense of loss gripped me, as if the future I’d imagined for my daughter had been stolen.

Gradually, I’m learning that the answers to these questions matter less and less as I accept DD’s diagnosis and focus on providing all the support she will need on her lifelong journey with autism.

I’m learning that when your child is “on the spectrum,” as the lingo goes, you’re on the spectrum with them, a spectrum of good days and bad, progress and setbacks, joy and frustration.

I’m learning to appreciate what makes my daughter unique, a word that has followed her since birth when she arrived in the delivery room with two traits we didn’t expect: crystal blue eyes (which are now hazel) and a fleshy sixth finger on her left hand (since removed). Like those unexpected traits, autism is just one more facet of DD—not the defining one.

If DD must be defined by anything, let it be the love of her parents who, ultimately, are doing what all parents with children on or off the spectrum must do: love the child that God gave you. In the end, that’s the word that matters most: love.

Originally Published on Fatherhood at Forty