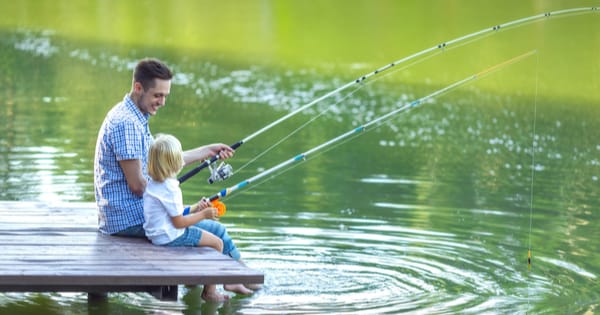 Let’s take a trip down south, way down, past New Orleans to a tiny fishing village called Cocodrie.

Coming in off Highway 56 through the southernmost tip of Louisiana, you’ll notice the water first: the canals running out into the Gulf, rusty shrimp boats dotting the shore with nets like spider webs, enticing the seagulls that swarm close by.

56 runs long and flat, past the Louisiana University’s Marine Consortium, or LUMCON, for short, the structure like a space station sitting out next to the water. The surrounding marshlands could pass for alien terrain. Every house is raised up on stilts, teetering trailers, and million-dollar fishing camps all sharing that same salty piece of land.

Are you there, yet? Do you feel it?

I know I do. I catch the fever every year, right around May when the lawnmowers crank back up and fishing season finally arrives. Something about those warm days calls my heart to the ocean.

Luckily, I married into a fishing camp in Cocodrie, Louisiana, one of the country’s top destinations for speckled trout. For six years straight the Cranors have made the annual trip down south. As soon as my wife was old enough to cast a line, she was out on the water, but her father is where this story starts.

Legend has it, Lance Lawrence used to venture out into the Gulf of Mexico in a Jon Boat, braving the waves and the storms in the undersized, aluminum craft. Thirty years later, and he’s still packing up his gear and heading for Cocodrie when the weather turns warm. These days, though, the Jon Boat is long gone, replaced by a much more sea-worthy vessel, a Triton 240 LTS.

Lance is co-owner of a Louisiana fishing camp, a place our family affectingly refers to as “Margaritaville.” The camp’s walls are lined with Jimmy Buffett memorabilia. The tropically-clad singer’s books cloak the coffee table, the pages weathered and worn like everything else that close to the sea.

I asked Lance for his daughter’s hand in marriage one summer while we were cleaning the day’s haul of trout. Lance was doing most of the cleaning, and I guess I thought I better catch him with his hands full.

Thankfully, he said yes, and every summer after that you could find our family wasting away again in Margaritaville. I grew up listening to Buffett. When I’m in Cocodrie, I’m transported back to Jimmy’s world, a magical place where the clouds roll in and squalls pop up out of nowhere.

Like the time we had to take cover under a deserted oil rig, the waves crashing and the lightning popping up much too close for comfort. There were, of course, better days on the water. When the fish are biting and the clouds are so low, so fluffy, you feel like you’re just a few steps removed from heaven.

Last year was the first year we missed the annual fishing trip. Our infant daughter had a lot to do with that. But now Em’s a toddler, a “big girl,” by her own estimations. Maybe she’ll be old enough to cast a line this summer. Maybe the trout will be biting and the weather will be beautiful. There’s only one way to find out.

It’s time to head down to Margaritaville.