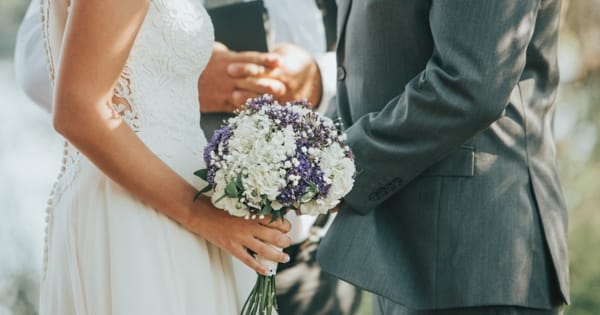 —
I went to a wedding this weekend. It was the first I’d attended in almost 20 years, and sitting there with 100 strangers, listening to the carefully written vows, enjoying the unique stagecraft of a well-choreographed ceremony, I couldn’t help thinking about the long, unexpected, bumpy, winding, perplexing, mysterious road ahead for the couple. I say that as someone who could probably best be described as “happily married,” a term that has to be put into context to mean anything.

In my case, it means that I felt married to my wife the moment we looked at one another and realized at more or less the same instant that we both wanted to be together for as far into the future as our imaginations could picture. That was it. That one moment was proposal, “I do”, and honeymoon all in one. Everything else, in my mind, was a formality. Still, we were just traditional enough that we thought an actual wedding with friends and family would be nice.

Most of our wedding planning was spent trying to figure out how to pull it off as inexpensively as possible. Jen got her dress at a consignment shop, we found a large Bed and Breakfast that offered a reduced rate for Thursday events, my flute teacher and her pianist husband provided the music, and the pastry chef at the restaurant where I worked made our cake. The judge we hired to officiate showed us the brief, standard script he usually read and told us we could change anything we wanted. We said it was fine the way it was.

I had low expectations for the ceremony. I figured it would be a nice party, followed by a nice vacation, followed by the rest of our lives. I had no apprehension or excitement as the day approached. My family all arrived in Seattle from the East Coast, and then a couple days later my friends for the bachelor party, which was a PG 13 affair. The day came, and my brother, John (the best man), and I drove to the site and got into our tuxedos and sat in our suite talking about the future. I gave him an envelope with all the checks he had to pass out to the caterer and musicians and B&B owner, and it was time to get married.

I shook a bunch of hands and said hello to as many people as I could because I was the groom and everyone was allowed to see me whenever they wanted. People found their seats in the little garden, music began, and John and I walked to our places by the judge, and waited. The music stopped, and an expectant, theatrical quiet fell over the crowd. I knew so little about wedding protocol that I didn’t understand what was happening. Then my teacher and her husband played the first bars of the wedding march, the crowd rose, turning as one to the French doors of the B&B, and Jen appeared.

I have never cared about tradition, and I’m not superstitious, but I was glad I hadn’t peeked in on her before the big reveal. The newness of the dress, of how her best friend had done her hair, and of her tears as she walked arm-in-arm down the aisle with her father, helped me see her fresh again, see through the veil of familiarity that had already begun to settle in after two years of living together. There, literally, was the person I fell in love with quite immediately, the light that lit something in me. The vows were read and exchanged, we kissed, music resumed, and the party began.

I don’t like parties, generally. I get lost in them, and would rather just talk to one person. Yet my wedding stands in my mind as the best party I’ve ever attended. It was a night surrounded by people I love because I was with someone I loved. What a great idea! What more do we need but love? I thought. Everything else is just filler. The evening sped past and then it was morning and we were off to the Honeymoon.

Of course, stuff came up then because stuff always comes up – the misunderstandings, the differing expectations, the private fears that turn into public squabbles. It wasn’t the best five days we’d spend together, but it was nice enough. We were happy to get back to our regular lives, where more stuff came up. I don’t enjoy mentioning the stuff, the troubles, the bumps and diversions; it can make marriage and life itself sound like a job, and as if the easy joy of the wedding was a mirage.

But the trouble is going to come whether I’m married or not. I’ve never known life without it. What I have known, however, is life when I’ve forgotten why it’s worth living. At those moments, dark as they come, the only light I can ever find is love. The same veil that I had let fall over how I saw Jen can fall over everything. See the veil for it for what it is and you can lift it, and there is what you’ve always known and had.

Facebook44TweetPin2EmailShares46
wpDiscuz
Share this ArticleLike this article? Email it to a friend!
Email sent!