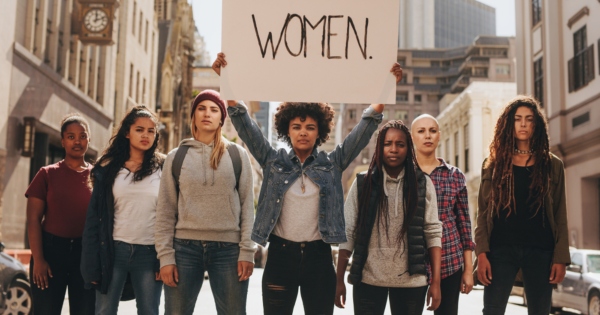 —
After a recent benefit performance of the play “Gloria: A Life,” our hostess asked my older son and me what it was like to be “two of the very few men in the room?” The question has stuck with me.

The play is a re-enactment of key moments in the women’s movement, featuring Christine Lahti as Gloria Steinem, who was present that night along with Jane Fonda and Robin Morgan. Part personal tribute and part social history, the evening was a timely reminder that much work remains.

About halfway through the performance, Ms. Lahti angrily directed a question to the audience, which included only a handful of individuals under age 35. “Where are the young people? We need more young people in the women’s movement today!” Looking around the room, the more urgent question was that posed by our friend:

Where the hell are the men that should be here?

I think I know what the problem is.

For much of my life, inspired by the women around me who fought for equal footing, I have refused to follow the standard playbooks. I was one of a handful of guys who took a women’s studies course at Harvard in the ’70s. (Yes, my interests were purely academic.) At work, I have happily reported to several women bosses. As I came up through the ranks, I sought both male and female mentors. (Two of the three major mentors in my life are women.) I have had two long, successful business partnerships with women. Seventy percent of my senior executive hires and 60% of the senior consultants that I have engaged over the past three decades have been women.

At home, I scramble to do my half. I’d like to think that my wife and I have raised our two boys to be gender-blind. However, as we all know, this is not enough.

Underneath men’s well-intentioned participation in women’s marches and our honest attempts to reframe a new normal at work, deeply entrenched patterns persist. At their root is the way in which we fail to discuss what it means to be in a healthy, sexually intimate relationship.

This was brought home to me last summer while on retreat with one hundred men (Women Teach Men). A sea of confusion poured out of us as we talked into the wee hours with Esther Perel, a Belgian psychotherapist who specializes in relationships and systems rife with conflict. Our discussion ventured into territory that men seldom go, due to our unwillingness to express emotion or have an honest conversation about sex. Some of the discussion was dedicated to helping men reclaim intimacy, not just with women, but also men. Some of it was about regaining our sense of touch (since culturally boys are cut off from touch at a very young age). Some of the conversation was focused on reframing sex from something men “get” or do, into an exchange that takes you and your partner to a place that you want to go.

The stream of topics that we covered was seemingly inexhaustible. I heard men say stuff that I had never expected to come out of any guy’s mouth ever, much less in front of one hundred strangers. Confirming the existence of an increasing global polarization between women and men, Dr. Perel asserted that creating a neutral “space” where both men and women are given permission to speak in authentic voices and listen, without shame or judgment, would be a positive step.

I would go even further. First, we must abandon the power-aggression paradigms that serve no one, men or women. To that end, men must learn to power down, get naked, and be vulnerable.

Next, I would suggest that we actually need to create not just one, but two neutral spaces for dialogue.

When I was young it was not uncommon for guys to spend a fair amount of time in the company of other men — hunting, fishing, or playing a sport. It was often in those “safe” spaces with fathers, brothers, cousins, and friends that men worked out the problems of their daily lives. Those spaces have vanished in an increasingly co-ed, interconnected world, forcing men to seek clinical help to sort things out.

What if we gave men permission to reclaim those spaces so that men can regroup and rewrite their playbooks? While this is challenging for a women’s movement that has legitimately fought hard to dismantle the old order, I think we need to trust that today’s men are fed up with the status quo and capable of being the architects of new models of responsible behavior.

Finally, I think we need to create a DMZ for men and women. Men must “show up” and participate more, instead of just putting in token appearances. But women also need to give us permission to be part of the solution we seek, and encourage men not to be afraid to stand up and speak.

I was having lunch with two (women) friends recently, and they asked me what I came away with from the retreat.

My response was that it’s clear that men are walking on eggshells. Scared to death of triggering an explosion. Uncertain of where the boundaries are. Desperate to express our desires, but holding back. There is a consensus that we all want to be engaged in healthy partnerships, personally and professionally, but the air is so toxic, the judgment so immediate, that we feel guilty for simply being male. And then there are the guys who want to enforce the old code and will take you down in a heartbeat if you suggest that they are out of line. We are beaten up on both sides. Frozen into silence and inaction. Women need to invite us into the conversation so that men can help create the change we all want.

At the end of the performance of “Gloria: A Life,” there was a long Q & A. It was not surprising to me that not a single man in the room took the risk of asking a question.

We need to fix that.

I really enjoyed your article and strongly agree with the need for increased dialog between men and women. I would add one thing about men’s “silence” when in the company of women, especially at an event like you mentioned above. Men are called out (quite rightly) for often dominating conversations where where women are also involved. I really don’t want to be seen that way and so my way of dealing with that is often not saying anything and really leaving the discussion floor open to the women there. I suspect other men might resonate with this too. I also… Read more »

What an amazing perspective that I never even thought about. Some of my fellow feminists are quick to judge, and I’ve had a somewhat similar discussion with my boyfriend about how men can be included. He mentioned “showing up” as well, but it’s more than that. When men show up, women need to welcome them and need to recognize that men CAN and WANT be our allies. After all, men suffer under the patriarchy, as well (i.e. toxic masculinity, machismo, etc).

Thank you for sharing your words!

Facebook74Tweet1PinEmailShares75
wpDiscuz
2
0
Would love your thoughts, please comment.x
()
x
| Reply
Share this ArticleLike this article? Email it to a friend!
Email sent!