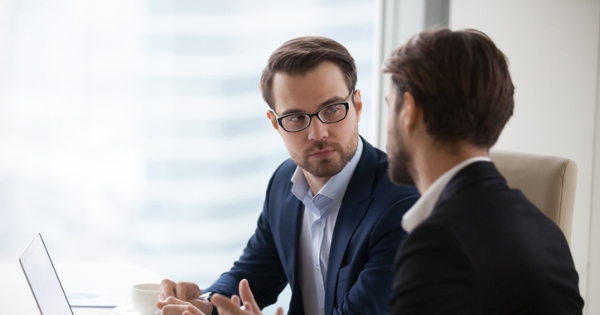 —
According to a survey by the Mental Health Foundation, men are far less likely to seek mental health help than women. The good news is, this doesn’t mean that they don’t want to get help.

When it comes to coaching, men are almost just as likely to get on board as women. Coaching and therapy overlap in a lot of areas, so why are men more willing to go to a coach than a therapist? Let’s explore a few possible reasons.

To many men, therapy may seem to be a passive way of dealing with the past. Although it can be great for some, it’s not the solution some men need or are looking for. They need help with setting and achieving work-related goals.

Can dealing with the past help you move your career forward? Probably yes, but not in a direct way like coaching promises to do. It’s not how therapists market it, anyway.

What if a man thinks he has his past all sorted out and he just wants to find a better job? Career uncertainty is at an all-time high and there are many men out there who need concrete guidance and advice on how to move forward in their careers. And in the world of business, coaching has no stigma.

Unlike therapists, coaches can offer mentorship. They can provide actionable advice on finding a job, landing a promotion, or changing a career.

Coaching clients often seek someone who can help them with professional development, business roles, and organizational outcomes. According to a study carried out by Korn Ferry, these are some of the top coaching topics for C-Suite leaders:

The list for mid-level managers and vice-presidents is almost the same. Some of these topics are indeed a good fit for therapy, but topics such as building effective teams or leading during times of change don’t really come with a “Jungian” or “Freudian” spin.

Coaching, on the other hand, utilizes corporate jargon, even when the topic is about something completely different. It offers advice that is applicable to most men in a corporate management way.

“Emotions” may be the biggest reason why men avoid therapy. Just the thought of engaging with a stranger in a deep conversation about their (or someone else’s) feelings makes some men cringe.

Therapy has a reputation for forcing people to explore their feelings. True or not, it’s putting off a lot of men. A good coach will help their client open up and explore their emotions, but they’ll use different paths to achieve that.

When imagining a coaching session, no man conjures up images of him lying on a therapist’s sofa bawling his eyes out. Coaching appears to focus more on tasks. It’s about moving forward even when our emotions are blocking us.

The work-oriented jargon comes into play here as well. While therapy uses terms like “treatment”, and, well, “therapy,” coaching uses empowering language like “goals” and “strategies.” And to execute a strategy or goal, one needs to take action.

The definition of these nouns compels you to do something. Repeating “treatment” and “therapy” to a man can make him feel like something is wrong with him.

Doing something appeals to men. There’s a lot of talk in coaching, but the talk moves to action. Too much talk can make some men antsy. Coaching has its own version of action-reflection—less talking, more doing.

In each coaching conversation, the coach and the client produce practical action steps together. Therapy can indeed produce results as well, but they are often intangible, although certainly invaluable.

But the approach used in coaching can help men better see the results. One more figure on the paycheck is a more tangible result. Action steps keep men engaged. As a man sees how he is progressing towards his goals, he may be even more motivated to move on with coaching.

The idea of paying someone between $150 and $300 an hour just to talk with them in their office may seem ridiculous to some men. And if you want your insurance to pay for your therapy, the waiting lists can be quite long.

Coaching sessions usually start at $50. Good coaches charge much more than that, but the more affordable option is still there for those who cannot afford a better coach.

Moreover, finding a “readily available” coach is often easier and faster than finding a licensed therapist. After all, a coach doesn’t need a license.

However, the government doesn’t regulate coaching. The biggest problem with coaching may be the fact that anyone can brand themselves as a life or business coach. The accessibility of coaching is a great perk for many, but the reasons behind this may not be so good always.

Many would have us believe that men are privileged because so many things in life are designed for the benefit and comfort of men. This may be true for some walks of life, but the world of psychotherapy proves otherwise.

The American Psychological Association guidelines for the treatment of various social groups have been here for a while, but the first-ever APA guidelines for practice with men were released just last year.

To put things in perspective: APA released the “Guidelines for Psychological Practice With Girls and Women” for the first time back in 2007. Although things were different half a century ago, today, male-focus psychology seems to be the underdog in the world of therapy.

Aversions, Misconceptions, and the Stigma

Could it be that the reason why men prefer coaching to therapy is simply that it’s an alternative to something men have been avoiding for a while, but need it just as much as women?

Coaching, as a new approach to helping others, doesn’t come with so many labels as it hasn’t had the chance to earn them yet. Therapy is an empirical approach that has been in use for over a century, so we have been dissecting every aspect of it since its inception. But, we have also let the stigma linger around for too long.

Some men can’t afford to be seen leaving a therapist’s office because it can hurt their reputation. Traditional gender roles haven’t been of great help either, as a lot of men are taught to “suck it up” when struggling with emotional difficulties.

It’s no wonder many men perceive therapy as feminine. When you’ve been told that expressing feelings is reserved for girls, going to therapy may seem like a weakness. Therapists need to work on finding a way to penetrate the tall stoic walls of masculinity.

The aversion a lot of men have to therapy has been brewing for decades. Coaching is still relatively fresh and unexplored.

Coaching promises to help men in areas where therapy doesn’t go. It helps them build their careers, set goals, and improve their social life. However, coaching is no replacement for therapy.

Coaching can help someone move forward in their career, but men still need to be encouraged to seek professional help from a therapist when it comes to mental health issues. Mental health services can learn a lot from professional coaches on how to appeal to men.

Leslie loves getting out hiking to clear his head at the weekend. After walking the Camino de Santiago three times he is now addicted to hiking. (A better addiction to live with)