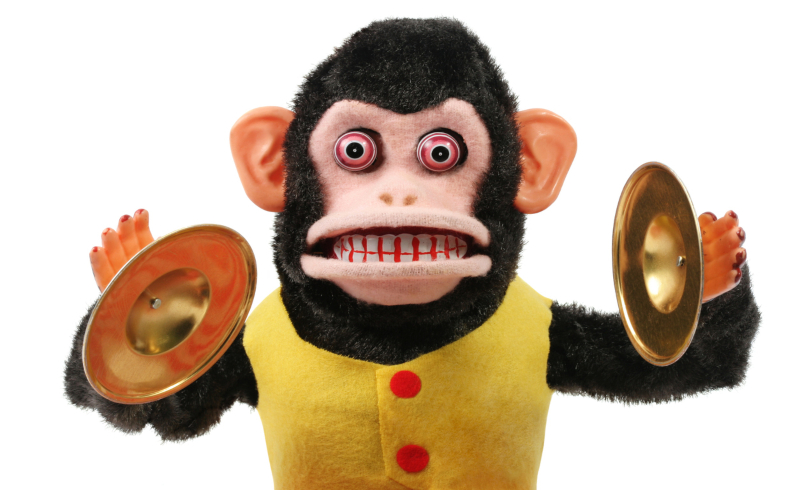 Shuffling between laundry room and recliner I attempt to rid the linens of daily grime, while spinning my brain, as if thrown in the dryer, for a few fibrous thoughts that might end up in the lint catcher. The only thing I’m feeling is agitated and damp, it’s not going well, maybe I need to hang out online for a while? Let the breeze do it’s thing.

Okay, I’ve wrung this one out for sure.

At least I get my first paragraph down before my attention starts to falter, and I’m dragged into a barrel of monkeys so to speak, reverting to some pre-evolutionary monkey mind. It’s my weakness. Hilary Mantel says, “If you get stuck, get away from your desk. Take a walk, take a bath, go to sleep, make a pie, draw, listen to ­music, meditate, exercise; whatever you do, don’t just stick there scowling at the problem. But don’t make telephone calls or go to a party; if you do, other people’s words will pour in where your lost words should be.” Too late, I not only called my sister, but my daughter, and my manicurist who was much more sympathetic and accommodating!

“What do I mean by weakness? A profound sense of inability, both to do and protect even after great effort, to author, perform, effect what we have wanted or with the success we would have wanted, an inability to secure one’s own future, to protect oneself, to live with clarity and assurance or to ward off shame and suffering.” Rev. Michael J. Buckley, S.J.

I start ingratiating myself with fellow midlife bloggers online because it’s a totally legitimate use (waste) of time. Socrates called it akrasia, as in acting against your better judgment, doing one thing even though you know you should do something else.

The truth is I’m trying to make friends with “other” midlife bloggers, some refer to it as networking, but I’m having trouble breaking into this exclusive clique. I feel like I’m back in high school trying out for the cheer squad, but I end up as an alternate (someone they use when sickness occurs), feeling marginalized much?

And then to top it all off I found out there is a list. That’s right, a list of the top 100 midlife bloggers, all you have to do is submit your blog, and they’ll decide if you make the list or not, then for an additional fee, they’ll mingle for you on social media, as if a dating service for bloggers?

I’m sort of stunned. Why haven’t I heard of this list before? What the hell? It’s like the best-kept secret in Twitter Town. It’s as if I’m washing my dedicates by hand, and everyone else is going to the fancy new cleaners. Their linens come back refreshed, folded, and boxed while my wrinkled garments get thrown unceremoniously into the cupboard (I can’t stop spinning the laundry theme). Deal with it.

I want to be listed! You can’t see, but I’m pouting as if a two-year-old, who’s been refused dessert before dinner.

I waiver, credit card in hand (which I don’t need because I have the card memorized – for emergencies of course), fingers hovering over the numbered keys. I’ve never been good at resisting temptation.

Wait a minute, wait a damn minute, it’s as if I’ve been soaking in the pre-wash cycle for too long, all I’ve ever wanted was to make a list, any list, but I thought it would require brilliant verbiage, a post gone viral, or Glennon Doyle’s stamp of approval, not my visa?

I was under the impression the noblest blogging practices meant improving myself so my blog, as if suds, rose to the top of the drum (Keep reading, I promise I will stop).

I slip my card back in my wallet, the list might be out of reach for now, but my ethics remain intact. I can always sign up later if need be, I add the site to my favorites, because at the very least I plan on stalking the top ten bloggers!

“Maybe you get caught up in the little things because you are really trying to distract yourself from having to deal with the big things. Maybe it’s avoidance.” Akiroq Brost

It seems I’m always waiting for some form of distraction to pass, or laundry cycle to end, before I actually get down to my work. C.S. Lewis says the only people who achieve much are those who want something so badly that they seek it while the conditions are still unfavorable, and he should know, he suffered a war injury, and was confounded by the nature of God, but despite all this, he published over thirty books, and to date the Narnia books have sold over 100 million copies.

And as far as I know, he was not on some confounded list! Lewis said, “true humility is not thinking less of yourself; it is thinking of yourself less.” Ouch.

Writing my way up the list was more of what I had in mind, but damn, it’s tempting – only $9.99 a month – that’s a couple of coffees, or as Erik Pevernagie warns, consumption can be a remedy against boredom and may convey a sense of fictitious power and supremacy, by standing out from the crowd through the extravagance of the expenditure. And then there’s that.

As I argue with myself I consider a little Socratian advice (cuz I can), he had distractions, the poor guy was accused of corrupting the youth of Athens (for some reason I can relate), and they sentenced him to death. Socrates said she who is not contented with what she has, would not be contented with what she would like to have. I have to get a grip, it’s a list, not a death sentence. Socrates was so chill, he spent his final days with friends, before drinking the executioner’s cup of poisonous hemlock, and went to his death with calmness and poise. But I digress.

Thank God the dryer went off and slapped me back to reality, as I fold the sheets, I realize I don’t need a list to validate my work, although it would be a source of great pride, and at last, give me something to brag about, but as Socrates warned, if you don’t get what you want, you suffer; if you get what you don’t want, you suffer; even when you get exactly what you want, you still suffer because you can’t hold on to it forever. Your mind is your predicament or in my case my punishment.

So here’s my delicate conclusion, be true to thine own self, and as Socrates claims the secret of happiness, you see, is not found in seeking more, but in developing the capacity to enjoy less. Like washers and dryers, capacity only matters if you have a lot of dirty laundry, and as we know an unwashed life is not worth living.

Post Blog Update – I got an email today, it appears that I made the Top 100 Midlife Bloggers List without using my visa as status, sadly I’m listed at 103, more like an alternative, we’ll just call it a wash!