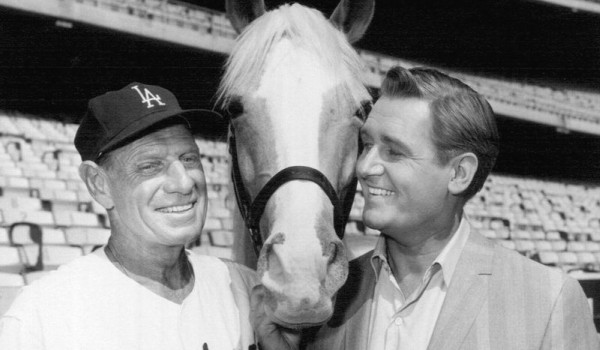 The first book that ever obsessed me, that changed my life, was Nice Guys Finish Last, an autobiography by Leo Durocher. I was twelve when I purchased the book with my birthday money.  What first caught my eye was the book’s bright yellow color, which reminded me of the wrapping around a chocolate Mr. Goodbar.   But it was the blurb on the back jacket that made me cough up my cash, that promised something much more than what I had come to expect from the bland, stat-laden sports books designed for kids that I usually read –  stories.

Durocher, by all standards,  was a mediocre baseball player, a no-hit, good-field shortstop whose scrappy style helped him hang around the big leagues long enough to scoop up grounders for some of the game’s most iconic teams: the 1927 New York Yankees and their famed “Murderers Row” lineup featuring Babe Ruth and Lou Gehrig; and the 1934 St. Louis Cardinals, nicknamed the “Gas House Gang” for their rough and tumble approach to playing and life in general.

Leading the Gas House Gang was the irascible Jay Hanna “Dizzy” Dean (his brother Paul, two years younger, also on the team, was nicknamed “Daffy”).  Dean was a country kid with a darting fastball and plenty of confidence.  He once said, “It ain’t bragging if you can back it up.”  Which he did that year, pitching the redbirds to World Series victory over the Detroit Tigers.  But it was the way the Gas House Gang won, and the time they played, that made them special and memorable.  With the Depression raging and the nation at its breaking point, this team, comprised mostly of poor, uneducated young men from the “sticks”,  struck a chord with Americans. At a time when daily life was a struggle, here was a group that did not take life seriously, who were having fun, who were outlaws without breaking the law, who fought with each other as much as with opponents.

In Nice Guys Finish Last, the Gas House Gang is described as a collective group of rogues with cleats and mitts, who defied curfews and stayed out late drinking and playing cards.  They never washed their uniforms during winning streaks, and because they won so much, often resembled dust-bowl travelers from a Steinbeck novel.

Durocher was an anomaly on that team.  He was a city guy, a “sharpie”, a street-smart hustler who carried dice in the pockets of the slick-suits he favored when bouncing around town.  He counted Hollywood actors as friends and actresses as lovers.  He stretched worlds, squiring debutantes to fancy balls and taking money off marks at grungy pool halls. While more common today, Durocher was one of the first athletes to become a celebrity, more for what he did off the field than on it.  This attention sometimes caused conflict in the clubhouse with teammates who didn’t think a two-bit deserved such notoriety.

But even players who openly disliked Durocher and his lifestyle still respected the way he went about the game of baseball: the fire he displayed, his team-first approach, his willingness to sacrifice his body and take chances to win games, be it taking a pitch in the ribs to get on base or scuffing a ball on his razor-sharp belt buckle to give his pitcher an edge.  Above all, he was a leader. So it was not surprising that Durocher became a manager once his playing days were over. Keeping with his history of always being where the action was, of being involved with teams that transcended the game, it was fitting that he skippered in the 1940s and ’50s two of the most memorable franchises of that or any era: The Brooklyn Dodgers and The New York (Baseball) Giants.

It was as a manager that Durocher truly put his name on a national level.  First personifying the “us-against-the-world” spirit of the Dodgers and their loyal fans, a team affectionately nicknamed “The Bums.”, The team played its games in a Flatbush bandbox called Ebbets Field, a place so cramped and intimate that players need only to reach a hand up in the stands to get a bite of a hot dog, some popcorn or peanuts, even a swig of beer from a fan’s cup.

After wearing out his welcome in Brooklyn, Durocher performed the baseball blasphemy by taking over their cross-town rival.  The Giants played their games in a decrepit park in the Bronx deceptively named The Polo Grounds.  And the team, in 1951, under Durocher’s watch, defeated the Dodgers, led by Jackie Robinson, when Bobby Thompson hit his immortal 9th inning home run(“the shot heard around the world”) to capture the National League pennant.

The title of Durocher’s book came from a quote attributed to him by a sports reporter.  But Durocher always maintained it was taken out of context; he never meant it to mean that anyone who was nice would finish last – except ballplayers.  The way Durocher describes it, he was sitting with the reporter one day before a game, explaining why he admired Eddie Stanky, his second baseman, a cut-throat player with a habit of spiking opponents in the shins whenever he slid into a base.  Just then the other team took the field, and Durocher, to the reporter, pointed out how good-hearted and kind each player was, all “peaches and cream types.” And with a wink, he said, “yup, nice guys, the bunch of them.  Trust me, they’ll finish last.”

Durocher hardly ever finished last, mostly because he preferred death to defeat.  His competitiveness was legendary and lethal.  He once said, “If I was playing third base and my mother was rounding third with the run that would beat us, I’d trip her. Oh, I’d pick her up and brush her off and say, ‘sorry mom,’ but nobody beats me.”  This was the sort of thing that so appealed to me as I read the book.  Not that I wanted to trip my mother, but to a 12-year-old it was not only astounding but also liberating, to read about an adult who was unapologetic and honest about his actions and his desires.  Durocher was non-politically correct long before the term was born.  And his non-conformity and rebellious attitude spoke to my natural contrariness.

But along with the stories, what I found so different and appealing in the book was the immediacy of the writing, a conversational style that made me feel as if Durocher was talking directly to me, was asking me to come into his inner circle. I always believed he was inviting me to the card game in the back clubhouse, or to the hotel bar after the game.  The experience was intoxicating, and when I finished the book I knew I had changed.

From that point on I no longer found satisfaction from the simple sports books I had enjoyed before.  They seemed trite and false.  Instead, I ventured into the land of fiction, discovering Hemingway, Fitzgerald, Maugham, Doyle and others.  Perhaps I was trying to form my own Gas House Gang, one book, and one page, at a time.

END_OF_DOCUMENT_TOKEN_TO_BE_REPLACED

Facebook27Tweet3PinEmail1Shares31
wpDiscuz
Share this ArticleLike this article? Email it to a friend!
Email sent!