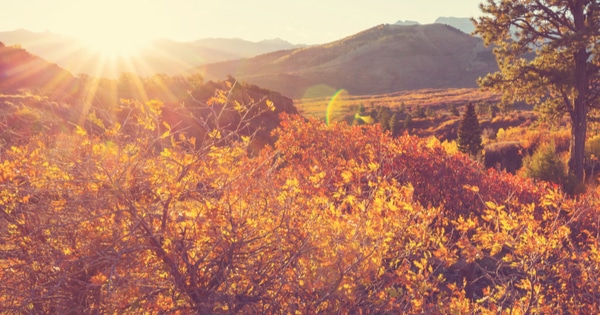 I had the great good fortune this past weekend to visit my friend Mark Singer’s farmhouse and land in the Catskills.  His home is enveloped in a long pitch of lovely blessed with all that is wondrous in the area – mountains and woods, streams and ponds, pastures and meadows.

But one morning, walking his dogs, we reached a plateau on his property where we could see it all, including a tree line with all the colors of fall glowing gold, green and amber in the morning sun.  It was a sight meant to inspire, and humble, and it did, making me feel grateful to be in the moment, to be in the presence of something so much grander than anything we humans could ever conjure or conquer.   And in my peculiar way, awash in all that goodness, a question crept in that gave me enough pause I decided to share it with you here:  How many times in my life had I had this feeling?

That is, how many times in my life had I looked at something from nature and been moved to such a degree that I lost all sense of myself, my problems, my worries, any concern other than the challenge of sitting in pleasure and accepting a precious gift from nature?

I didn’t have an answer.  I never kept count.  And as we walked back toward the house, the dogs leading the way, I regretted I hadn’t.

Now my friend Mark is witty, wise and inquisitive, but more importantly, he’s open (or at least tolerant to listening) to my odd yens and hypothetical leanings.  So when we got settled I asked if he ever wished he had kept count of certain things he’d experienced or done in his life?  His raised eyebrows induced me to lead with an example I considered rather tame, but also was a shared passion of ours: basketball.

Have you ever wondered, I asked, which rim you’ve shot the most shots in your life?   He gave it a bit of pondering, long enough for his eyebrows to lower, and figured it was where we first met – the semi-barbaric and spuriously spartan hoop court at the Lone Star Boat Club, a former gentleman’s gym on West 54th Street in New York City, a sliver of a building accessed by a darkened entrance straight out of a Sherlock Holmes mystery.

Let me tell you a little more about The Lone Star Boat Club.  The gym was truly like something out of a movie.  It was shabby chic and ramshackle in all the right places, sporting antiquated exercise equipment rusty and dusty from disuse.

In fact, it seemed most members were more interested in playing pinochle in the locker room than working out, idling away the time at a makeshift table while they chomped on cigars, downed strong spirits (I remember seeing one regular hooked up to an oxygen tank) and cursed each other (nicely) and the hands they were dealt. Given the slow-burn cool of the place, and the pervading aura of privacy, it was not surprising that it was populated by many an actor, famous and not-so-famous, along with the random musician or writer or other poor sod scratching the itch of creativity.

And a few played hoops with myself and Mark, on the top-floor court, a verifiable bandbox with one rim, sweat-stained walls so close there was no out-of-bounds, and enough cracks and holes in the structure that in the winter months you played in frigid temps that caused your breath to freeze and hang in the air like a mystical (or mist-ical) Michael Jordan.

But the hoop games at the Lone Star were stellar, spirited and fun, rough and tumble, surreal and sublime.  And that was the place, according to Mark, where he hoisted up the most shots in his life.  I, on the other hand, had three venues in contention for the dubious honor of sporting rims rattled by my offerings: (1)  my childhood friend Sean Coyle’s driveway basket where we tore into each other in one-on-one games from dawn to dusk; (2) the Jake Nevin Field House at my Villanova University, where I played so many more games than classes I ever attended over my four years (and summer school sessions) that I should have gotten a degree in pick-up-basketball; and (3) the YMCA court in Hoboken, where I went from being a young man in his mid-20’s running non-stop to a middle-aged man in his mid-40’s wheezing non-stop.

Talking about this with Mark, and remembering these places I spent so much time, was both pleasurable and painful.  It made me happy to think of all the good times I had playing a game I loved, getting exercise and enjoying the competition and camaraderie of friends.  But it made me sad that it was over, that the part of my life that meant so much to me is gone, and given the aging process and my inability to bend over without wincing, most likely forever.

And while I have memories galore of games past, there was no statistician trailing me to keep track of the details, from shots attempted and made, to the number of times I pretended to draw a foul.  The immensity of data from those many hours of playing basketball, truly a big expenditure of my life’s hours, is lost forever, residing somewhere now in my graying grey matter.

And that’s okay.  It’s just absurd, and it’s unhealthy, to keep track of all the things we do in a day, a week, a month, or a lifetime.  While the advance of technology does give us more ways to monitor and record our activities, there are some things we should never let a fit-bit type apparatus collect, such as how many times we tell someone we love that we love them.   I guess I’m saying that the less we keep count of things we are doing, the more we can count on doing them.

Living in the moment, always the healthiest way to live, means not stopping to record the moment.  I see no sense in ending a moment in the present in order to preserve it as part of your past.  Better to just look at the fall colors radiating and rising up a mountainside, to admire the jump shot that swishes through and causes the net to hook itself over the rim, to crane your ear to the good-natured ribbing coming from a card game, than worry about making sure you’ll remember what you saw, what you did, or what you heard.

Trust me, it’s there – in your mind, in your heart, in your soul.  You can count on it.

END_OF_DOCUMENT_TOKEN_TO_BE_REPLACED

Facebook29Tweet1Pin1EmailShares31
wpDiscuz
Share this ArticleLike this article? Email it to a friend!
Email sent!