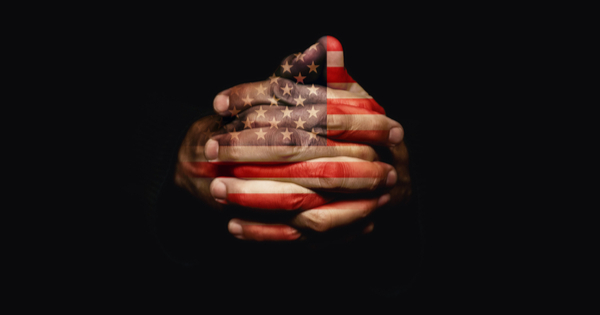 Can one be both a patriot and a follower of Jesus at the same?

In a former life, not so long ago, I served a congregation that included a wide variety of people. We weren’t very diverse in our ethnicity, but we had the whole range of people, economically, politically as well as understandings of the Christian faith. The parking lot had everything from beat-up old Datsun’s (pre-Nissan) to brand new convertible Mercedes. One summer, two families told me they were leaving the church because of what they described as “your politics.” One family expressed their dismay that I was not preaching about the most critical issue of the day. For them that would be abortion, they were staunchly conservative in their perspective. The other couple announced that the congregation, particularly its pastor (that would be me), was not prophetic enough in denouncing the current policies around war.

Despite my attempts to broaden the conversation, try to help different perspectives see the others way of thinking (even if you didn’t agree) – I felt like a failure. Until I realized it wasn’t about me.

It happened again recently. I received an email complaining about my lack of issuing a public proclamation celebrating the 4th of July. As the example, the sender attached an Email newsletter from another denomination extolling the virtues of America. If only I had more respect for the flag, our country and could provide appropriate leadership as a Christian leader. That was the implied message. The week before someone expressed displeasure with my recent encouragement for people to speak out, write to their representatives regarding the imprisonment and separation of children along our southern border. In the same batch of mail was an angry email that I was not doing enough to stop Donald Trump.

Ah, the life of a leader in Post-Civil America.

How does one embrace both loves of country and love of God? How does one honor the way of Jesus who embraced the outcast, and live in consumer-oriented US America?

Sure it was easier for liberals to be supporters of Barack Obama and see in him a desire to embrace an ethic of the Christian faith via the lens of Christian ethicist Reinhold Niebuhr. On the other hand, the current President has supporters from different views of Christianity, and see in his policies an explanation of their perspective of the faith.

What do we do? The temptation is to fall into the current polarity of our political culture and claim your side is right, and their side is wrong. (A Reading of Dr. Suess The Butter Battle Book if you need a refresher). That is indeed one option, and many are taking that road.

I want to suggest a third way. It begins with getting very clear on what one believes and why — articulating that belief clearly and concisely, while at the same time acknowledging possible shortcoming to one’s position. Then allowing others to respond, offer their opinions. Let’s listen and ask clarifying questions. In the end, maybe no one changes their point of view, perhaps there is a shift, but hopefully, there is at least respect.

For instance, I’ll give it a try here:

Immigration. I’m very much for a path to citizenship for people. We need immigration for cultural, economic, and spiritual reasons. I believe our country is enhanced in its diversity of people. I’m also well aware that immigration, when done correctly, increases the economic well being of families and the nation as a whole. I also believe that the United States is a unique place and a beacon of hope for people who are suffering and oppressed.

I also think that people coming to this country should do so through a proper and orderly system that includes documentation. The current system is broken, and there is no genuine interest in fixing the system. Various proposals from the so-called Gang of 8 plan to President Obama’s approach with Dreamers have been attacked from all sides. My position would allow for people already here to become citizens based on several factors, including family relations, economic activity, and evidence of positive contribution to civic life. A system for those not here would be similar.

Yes, I also believe we should continue to be a refuge for the world’s distressed and oppressed. All of this is not without shortcomings, not the least of which is coming up with a functional immigration system, refugee resettlement program on both the public, private, and non-profit sectors. I’m also aware of the abuses that can and have occurred within our current situation. These need to be addressed, but not in the present manner, which is cruel, vicious, and costly. In brief, I’m for an orderly immigration system, recognizing that there are benefits to all while acknowledging risks that are challenging.

My argument above is ultimately rooted in my faith, my understanding of a wide swath of scripture that calls for an embrace and welcome of the stranger, hospitality for the sojourner, and welcome of the refugee. I’m also holding this position because I genuinely believe it’s best for our democracy as well as the economic well being of our nation.

I recognize there are those who disagree with my position or parts of it. Those who claim the faith of Jesus and affirmation of our constitution may hold somewhat different perspectives. That does not make them evil or wrong.

Democracy is hard. Following Jesus is hard. If we want something easy and straightforward, it likely leads toward fewer freedoms and a more restrictive faith. I’m not interested in those options. I’ll take the hard work of being a patriot and a Christian every single day, warts and all.