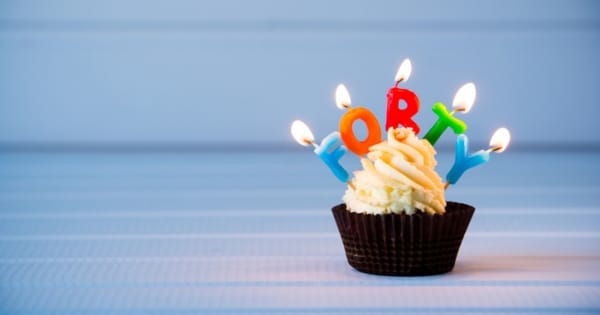 As I say that, I’m reminded of the Jimmy Buffet song, A Pirate Looks at 40,but I’m not a pirate of any sorts, so this entry won’t be nearly as interesting (A Blogger Looks at 40 just doesn’t have the same ring to it).

It’s funny, at this stage of life, because we go through almost two decades of relatively lame and uneventful birthdays. 21 is the last epic one and then it’s pretty blah for twenty years. I mean, who cares about 24 or 38, right?

But then 40 comes along… Suddenly, a milestone.

And so I thought it would be appropriate to write an entry on my last day of thirty-something. To take a glance ahead and write what I think (hope?) 40 will mean for me. And then, a year from now, I plan on writing another piece that looks back at 40.

1. Time to stop explaining myself

When I was younger, I felt a sense of inferiority looming in the air when I was in the presence of older/more authoritative people, especially those I respected. I felt that, with every new decision I made, I needed to explain why I wanted to do it. And then, as I was doing it, to explain why I wanted to either keep doing it (or not). This was particularly true with matters of identity and vocation.

I am who I am. By now, the container I’ve built during the first half of my life is set firmly in place. Methinks it’s time to stop adding onto and justifying it.

Now, the question is, what do I want to fill it with?

This is what really matters.

I used to think that I had ultimate control over my life.

I was raised under an individualistic and self-reliant ethos. Later in life, during my early 20’s, I adopted a spirituality that matched this worldview. It was a secular spirituality that I based on manifesting wealth and security and all of the other things that I wanted in childhood but never got.

Not to judge this form of spirituality (we’ll get deeper into this in a bit) — it was what I needed at the time and it served me well.

But I’ve lived a lot since then. I’ve seen that the things that I ‘manipulated/manifested’ into being were only temporarily good. It was the things that unexpectedly showed up that served me the most. And it was in my suffering — from things I’d never consciously bring on myself if I had the option — that truly shaped me and made my heart softer.

This is grace: the one-way, undeserved, unexpected, unconditional love of the divine. It’s this grace-centric faith that I’m turning the page to in this second half of life.

I want to refrain from fruitlessly striving to change the world and instead notice all the ways that God is changing the world right in front of me (and has been all along).

I look forward to retiring from my role as the so-called author of my life (which I never truly was) so I can lay back and listen to the words that have already been written for me to live.

3. Being a helicopter dad isn’t helping

This one is getting easier already. When I was a new dad, I was so scared (I still am, but I was next-level scared six years ago). Rory was such a delicate little thing and I saw it as my sole responsibility to keep her safe against the aggressive outside world.

I also saw it as my responsibility to regulate her behavior (even though, as a ‘spiritual’ person, I never admitted it). I wasn’t strict in the traditional sense, but there were plenty of times when I’d kinda freak out when she’d do typical kid stuff like grab the dog’s tail, climb and fall off of high objects, put nasty-ass objects in her mouth, wake us up during odd hours of the night, say rude and insensitive things, scream, punch, not eat her food, ask for the same toy at the store 50 times, refuse to brush her teeth, etc.

She still does many of these things, but age has softened her a bit just as it’s softened me. God has shown me that I need to let her be a kid. Let her get bruised up to a degree. This has all been informed by a grace-centric theology (the one I mentioned above) which has shown me that people don’t do better under more rigorous punishment. Quite the opposite, in fact.

So, less helicopter parenting at 40 while enjoying this little human as she grows into her incredible self.

I left the SBNR world and re-adopted a mainline Christian faith (albeit infused with a healthy amount of mysticism) a little over a year ago. Since then, I feel like I’ve been fighting against a lot of inner voices, particularly on this blog.

I’ve felt the need to fight against the SBNR world I just came out of (I just did it a few moments ago in this very article, actually).

I’ve felt the need to fight against what a lot of people (and I used to) think about what it means to be a Christian (aka: being a Bible-thumping, gun-gripping, immigrant-deporting, gay-bashing, anti-feminist, white male nationalist).

But as I move into my 40’s, I want to unclench my fists and spend what little time I have left in this world loving others and existing in a more simple, surrendered, and grace-centric space — as hard as it can be.

I don’t have anything against the SBNR world. I’m not going to eradicate all toxic Christianity from the world. And I have to accept and thank my conservative upbringing (some of it actually did serve me well).

What the hell am I doing here? My time here is short. I pray that I can breathe into that space more.

5. Know that self-care is not a privilege

Since leaving the SBNR world, I’ve also stopped writing and sharing so much about topics that can be deemed self-helpey or based on ‘self-care’.

This mainstream Lutheran faith I’ve fallen in love with is a prophetic one. Social activism is a big deal.

This has been both fulfilling and discomforting. It’s been fulfilling to name the injustices in our world and to confess and reconcile my role in them. It feels incredible to confess my sins knowing that God loves me back to wholeness regardless.

But I’ve learned this last year that I’m not a sign-toting prophet (God bless ‘em). If anything, I lean towards the mystical approach. I’m an introvert. The way I’ve been designed, my energy is best spent bringing people together and creating sacred spaces where those fist-shaking profits (along with everyone else) can feel fed so they can go back and do the ever-important work that they do.

This is why I’ve brought back hygge as a solid pillar of this blog. I’ve been tip-toeing around it for the last few years out of fear that sharing too much about it would show my privilege too much. But this is crazy. Fostering a relaxing safe haven at home and a convivially simple inner-personal and social atmosphere should not be an artifact of affluence and privilege. I need to let this go and step into this space in a thoughtful way (which I’m working on now).

Ugh… It’s true. I’ve been blessed with a fantastic metabolism. And I’ve abused it as much as possible these last several decades.

I row several times a week and am in relatively ‘good shape’, but I also know that my family history (cancer, blood sugar issues, etc.) isn’t super hopeful. A lot of this is genetic and out of my control, but the least I can do is be mindful over the few factors I can control and the food that I put into my body is vital.

I just downloaded this health app (again, pray for me) and am going to start being more strict in the dietary sense. Especially with sugar. Sugar is my weakness. And beer, but I’m a total lightweight, so this helps in that department.

So, yes… Here’s to a healthful next half of life.

I suffer from a mental disability that I recognized around middle school. I have a (very) hard time remembering the names of characters.

Maybe this comes from the fact that, during that time, I was trying to keep up with my friend who was a voracious fiction reader and was flying through The Lord of the Rings books at an uncanny rate. I think I developed a bit of a complex.

Regardless of the reason, it’s a hangup for me.

But I’m a non-fiction addict. It’s my drug of choice. I love reading about ideas and concepts (my mouth is watering thinking of seminary).

That said, I also understand that reading fiction is really good for you. And I do love stories.

Another hangup I have around fiction is that my survival-based lizard brain thinks that I’m not learning anything useful and therefore I’ll likely go broke, starve, and die alone. But this is complete nonsense. I’m sectioning off night time for fiction. Period.

And now, I’m off to the magical land of Madison, Wisconsin to enjoy my 40th birthday as I turn the page to the second half of life and let some of these things sink in.

I can already feel it. 40 feels like it’s gonna be pretty good.
–